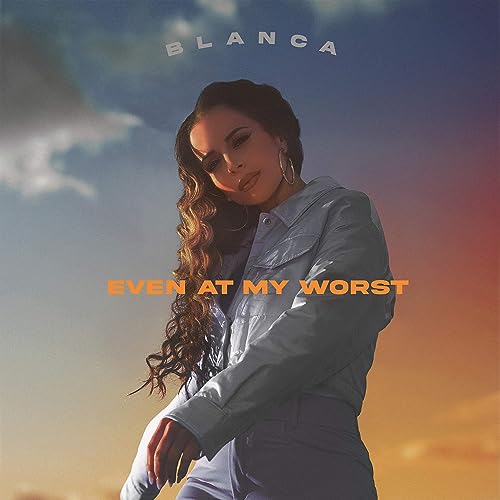 Blanca– Even At My Worst (Single) (Amazon mp3/iTunes)

Back when they were active, Group 1 Crew was one of the most inventive and musically daring and unique CCM/pop/rap groups over the past decade. I never really connected with them right from the outset, however it was the band’s third album Outta Space Love that won me over as a fan. It was the first album I ever heard from the band from start to finish; and I was very impressed, with songs like “Let’s Go”, “Need Your Love”, “Please Don’t Let Me Go” and the title track all being highlights. Since then I have been semi-avidly following the band and all of its members, including their member changes- Pablo left in 2012 and Blanca left in 2014, while original member Manwell started up a podcast and released a solo album. These days I haven’t been as active in being across all of Pablo and Manwell’s solo projects and endeavours… but I do respect them as artists and one day I may dive deep into their material.

Yet as a solo artist, Blanca has connected with me the most. She released her debut self-titled album in 2015 after being in the group since the band’s inception. Blanca’s first release, complete with her distinct soulful and captivating voice, blended together with a myriad of genres (inclusive of reggae, pop, CCM, r&b, gospel, soul and many, many others), and also comprising her singles “Who I Am”, “Greater Is He”, “Not Backing Drum”, “Echo” and “Different Drum”; still having listeners singing along with the catchy beats and relevant lyrics. If you want to read a review of Blanca’s debut album that we posted on this site, you can do so right here. So, while it had been about a couple of years since Blanca released anything new, she did unveil her sophomore album Shattered last year (and you can read that review over here!). With Blanca then unveiling her Spanish EP Quebrantado (containing some of her biggest hits from Shattered, as well as a brand new song!); the multilingual CCM/pop artist has recently dropped Renovada. We recently just gave our initial thoughts on the EP here… but now it’s time to delve deep into Blanca’s all original new English single “Even At My Worst”!

Writing songs that are true to my story has always been my goal, but there are a few special moments in your career where you write a song and feel like it literally carries your heart. ‘Even At My Worst’ does just that. I walked through a divorce in 2019 that left me feeling broken and insecure about my own self-worth. It’s from that rock bottom that I was able to experience God’s goodness in such a real way.

“Even At My Worst”, as CCM and as somewhat lyrically cliché as the track is, is nonetheless still impacting and hard-hitting. As Blanca eloquently and passionately reiterates in this radio friendly tune, that Jesus Christ loves us even when we are at our worst, and despite whatever is going on in our lives at the moment; we are met with a prayer of gratitude, and admission of fault, and a sense of reassurance, that the Maker of the Universe, and our Father and Saviour and Friend…loves each one of us intimately and unconditionally. It’s a simple concept and one that isn’t sung enough- but the moment we fully realise the depth of God’s love for us and that we are worthy and are deserving; I reckon that’s the moment we can truly live free in God’s presence.

For some, the fact that Group 1 Crew have totally rebranded (as in split, and now Manwell is releasing music in the mainstream!) and now Blanca is creating solo music which is stylistically different on the whole than the rap that Group 1 Crew was famous and popular for; would be a bitter pill to swallow. But in my opinion, Blanca’s second album Shattered, in particular the title track, “Real Love”, “Heaven” and “How Much More”, is something to be celebrated as it marks the beginning of a new chapter (genre change or genre expansion?), with plenty of God moments and a thoroughly inspiring message. The latest single “Even At My Worst” continues to firm up Blanca’s dominance in CCM whereby females are scarce- and no doubt Blanca will definitely be successful on many radio stations! Fans of Beckah Shae, Britt Nicole and TobyMac will love this new single; as we let us sit back and marvel at Blanca’s refreshing return to the spotlight!