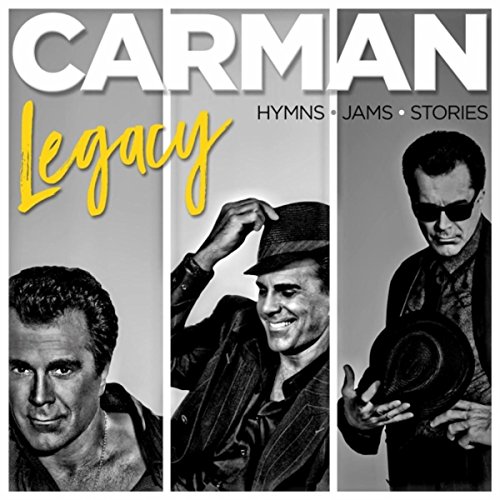 “…When I was growing up, I virtually listened to one sole artist- Carman. Famous for his songs like ‘Satan Bite the Dust’, ‘A Witches Invitation’, ‘Great God’, ‘Revival in the Land’, ‘Radically Saved’ and ‘Addicted to Jesus’, Carman, then and even now, revolutionised the culture and genre of CCM, cementing his own flair of acoustic pop, Latin American influenced songs, story-songs, and a whole lot of other unique instrumentation and song arrangements, on a genre even now still embedded in radio-pop. I can remember even having cassette tapes (yes, I’m that old to remember the predecessors to CD’s!) of albums (tapes at the time) of RIOT, and some of the Yo Kidzchildren’s collection of songs that were recorded way back during the day…”

Just a few minutes ago, I was searching for a perfect introductory statement as to how I would describe my appreciation and love for Carman’s music, and I was searching the internet for ‘good quotes’ for me to use. Then I came across one of the blogs Jon wrote for this site a few years ago, and realised that the quote for this review of Carman’s latest album, was here all along. With Jon declaring that during his childhood all he listened to was Carman, I realised that it was applicable to me as well, so here you go, guys. Carman was the only artist I listened to in the 90’s, and while it’s a shame I didn’t listen to other artists at the time such as Michael W. Smith, Amy Grant, Steven Curtis Chapman, Avalon, Point Of Grace, Third Day, Jaci Velasquez and Newsboys (to name a few!), I think I wouldn’t be who I was without the influence of Carman’s music in my life. You guys can read my Flashback Fridays post on how Carman’s 1995 album RIOT (and 1995 movie of the same name) influenced my life; and once you’ve done that you can read on.

Because Carman ‘dropped off the face of the earth’ in the late 2000’s and early 2010’s (until the launch of his comeback album No Plan B in 2014, inspired by his plight with cancer- and you can read our review of the project here!), I thought he was done, wasn’t going to be doing music ever again. Boy was I so wrong. After the successful release of No Plan B, last year Carman dropped yet another full-length release- this time called Legacy and featuring some well-known classics redone and some more future favourites. This album wasn’t highly publicised, and consequently I only recently discovered that it even existed at all. So what was my decision? Well, it was to review the album of course. Even though Legacy may by just under a year old, the nostalgia factor as well as Carman being a big influence on my life in general, led to my decision that I couldn’t not review the album- as it’d be criminal! So, without further ado, I’ll quickly dive into these reflective, confronting, comforting, honest, emotional and sentimental tracks, and whether you all should jump on the Carman bandwagon, if you haven’t already!

As the album starts off with… “Bollywood Hymn” (is this for real?) we can tell that Carman is having fun and a blast, in a genre you could only describe as ‘Carman’ genre. The opener transforms a hymn medley of “Nothing But The Blood” and “It Is The Blood” into an energetic, fast paced Bollywood style production, that really needs to be heard to be believed, as Carman delivers a powerful rendition of a timeless classic that is truly one of my favourite versions of all. “So Glad” has a “My Story”, “House of Praise”, “Overcoming Child Of God” or “Who’s In The House” vibe, as the gospel flavoured melody inspires us all to praise God with our whole hearts, as Carman asserts that he is very glad to see Jesus’ face and feel His presence in his life; while the slower tempo piano led reflective melody “Somewhere It’s Snowing” has Carman comparing Jesus’ love and forgiveness over us to be like snow, in a nostalgic throwback to his hit song “Whiter Than Snow” from RIOT in 1995. Carman also delivers a poignant and inspiring rendition of one of my favourite hymns of all time- “How Great Thou Art” is married with this original tune “Great Is Our God”, and though Carman only includes the first and the last verse of the timeless classic (the song could’ve been easily another 3 or 4 minutes longer!), this song is still impacting, and sure to connect with many listeners, regardless if they are believers or not.

Led by big brass instruments and a jazz inspired melody, autobiographical and testimonial “Vittoria Di Cancro” (which is Italian for ‘Cancer Victory’) is probably one of the most honest and emotional songs Carman has ever done, as he outlines how his diagnosis and subsequent healing on cancer occurred (so that others can claim that testimony for themselves and Jesus can work through Carman’s words in others’ lives!), declaring that ‘…God is still on the throne, He ain’t left me all alone, this one thing, this I know…’; while Carman also re-records hits such as “S.A.V.E.D. 100%”, “Jesus Now” (both originally from Instrument Of Praise) and “Good To Me (originally from House Of Praise), with each of these altered and reworked versions in my opinion sounding way better than their original recordings (and in the case of “Jesus Now”, it’s almost like another song, with the addition of verses to the chorus that was only featured on the Instrument of Praise version!)- but if you disagree with me then that’s ok.

“The Wise Guy” has a “Spirit Filled Pizza” type of vibe as the harmonica and accordion is featured heavily in the jazz/latin/gospel/pop/salsa melody where Carman presents to us a far-fetched story of some members of the Mob becoming born again Christians. It’s a fun melody and pretty tongue in cheek. The all-new original songs end with “President Trump Blues”, a confronting yet all too real reminder of the state of America at the moment (which can make us worried and scared about the future, but should make us focus our eyes more on Jesus than ever before!); while Legacy ends with 3 re-recordings of fan favourites- “Who’s In The House” from The Standard, “Lazarus Come Forth” from Comin On Strong and “The Champion” from The Champion. While “Who’s In The House” is changed to an EDM remix dance track with the addition of new raps and the omission of one verse, both “Lazarus Come Forth” and “The Champion” stay close to the originals, as Carman updates these tracks overall musically for a younger audience- and as a lover of Carman’s 80’s and 90’s music, I approve of these new and updated renditions!

Listening to Legacy from first to last note, I must say that there definitely is a genre called “Carman”- with such a unique repertoire of musical genres, Legacy was easily one of the most nostalgic albums of 2017. And nostalgic means that this album probably won’t rise up the charts or gain massively in sales or Spotify listens. As an album Legacy probably isn’t all that popular in comparison to other albums from 2017 such as Out Of The Dark (Mandisa), All In (Matthew West) and Hills And Valleys (Tauren Wells). If I can also quote from Jon’s review of No Plan B a few years ago, that rings true for this album also- ‘…from an objective standpoint, isn’t one that’ll convert many listeners who may not have heard his music in a long time, if not ever. But this is not a piece about someone who’s yet to make it in the music industry- with over 30 years of industry experience, Carman’s new album [No Plan B- but also Legacy too!] is just as enjoyable now as R.I.O.T., The Standard and Addicted to Jesus were back during the 1990s when Carman and his popularity were at their peak. Even if his new album doesn’t chart well when stacked against today’s popular artists, No Plan B still has something great about it. Call it something different, or even something so unique and outside the box; No Plan B presents one of Carman’s most unique albums, continuing to stand tall today in 2014 as albums from him did during his popularity peak…’. With Jon saying a near-perfect conclusion better than I could ever say- let me finish off by saying that Legacy won’t win Carman many awards. However it will win souls for the Kingdom. Which is better in the long run, do you think? Enough said from me, why don’t you all check out the album! I know, the review is a year too late, but better late than never, right?