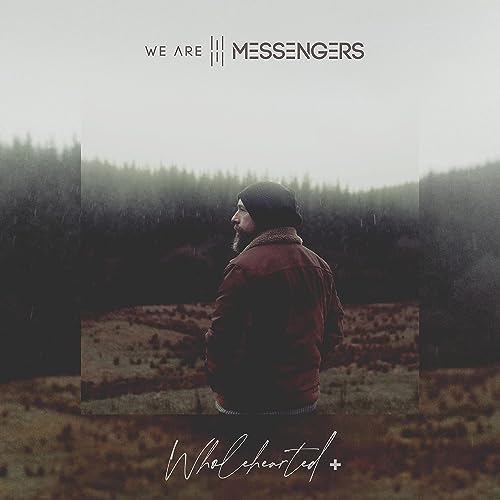 We Are Messengers– Wholehearted + (Amazon mp3/iTunes)

We Are Messengers, comprising of lead singer Darren Mulligan, drummer Drew, guitarist Kyle and bassist Raul; have had a stellar run, in terms of popularity and momentum following their debut album in 2016. Previously recording as The Remission Flow, Irish singer/songwriter Darren Mulligan split up the band and them reformed as We Are Messengers with his wife Heidi in 2015. What resulted was an instant radio splash, as well as a following at live shows. As Darren and his friends strive to point listeners and fans to Jesus, the author of life and our Everything; We Are Messengers, signed to Word Label Group, and now Curb Records; released their self-titled debut 14 track album way back in 2015, to much critical acclaim, and the hit singles “Everything Comes Alive”, “Magnify” and “Point To You” (of which you can read our review here!). Fast forward to now, and can I just stress and absolutely highlight that one of the most inspiring, encouraging, and hopeful albums I’ve heard over the past year or so, is We Are Messengers’ full-length sophomore effort Power? Comprising their smash hit single “Power” as well as the dependable heartfelt ballad “Maybe It’s Ok”, the CCM band from Ireland provided us with a worthy follow-up to their self-titled debut in 2016, as we were delivered a rousing worship experience full of vibrant and eclectic melodies. My brother Jon reviewed this album, and you can view it here (and here for the deluxe edition!).

Yet since that time, the group have unveiled a new album. Wholehearted is the group’s third full length release, and though Darren and his friends don’t do that much to reinvent the wheel of worship and CCM, what they do possess within these 12 tracks (17 tracks in the deluxe edition), is heart, soul, passion, and a zeal for Christ. Though some artists these days sound like they’re phoning it in (sorry to say this, but I’m looking at you Big Daddy Weave and Sidewalk Prophets!); We Are Messengers are honest, vulnerable, emotional, and impacting. Wholehearted isn’t the most ground-breaking or creative album. But if I’m willing to overlook the seemingly lyrical and musical ‘sameness’ because of the emotion that I have felt many times in this latest collection of new songs… then isn’t that saying something? We Are Messengers isn’t the band to fly by over the radar. But they don’t need to. They’re a quiet achiever, and this album is proof of their gradual rise to fame and that their success is indeed warranted.

I always felt like an outsider at many of the churches I went to with my family as a kid. These places seemed eerie to me, so hopelessly cold and so deeply impersonal to my arrogant teenage mind that I was convinced that God, if He existed at all, would want nothing to do with someone like me. The God I heard about as a child was obsessed with me being good, and it didn’t seem remotely possible that He could ever be a friend of sinners, of which I was surely one. But something astonishing happened when I was 27 years old. My fiancée, Heidi, who I had been dating for eight years, had a radical, life-changing conversion to Christianity. She fell in love with Jesus, and shortly afterwards, I did too. You see, I realized something incredible about Jesus. He spent His whole time on earth with outsiders, with those on the margins, with the people society rejected, telling them that the Kingdom of God was close and that there was a place for them, somewhere they could belong. The Jesus I know and read about in the Bible was a friend of sinners, and because of that, I know He is a friend of mine.

The title track opens proceedings, and is a vibrant, energetic dance/EDM melody, whereby Darren admits that he’s fallen short and that he needs Jesus’ grace and love and acceptance in his life. A melody that is a sort-of vague admission of fault and guilt (a blanket testimony type melody) that highlights the notion that we all need a saviour and that Jesus gives life and life abundant- wholeheartedly; we are met with a track that isn’t that ‘wow’ as an opener, but is solid, moving and inspiring nonetheless. The lead single “Come What May” is next, and though Jon has reviewed this song before (admitting that the track didn’t resonate with him as much as he thought it would), I for one have found this melody to grow on me- I also found the song originally ‘boring’. With the song being a typical radio friendly CCM song, one could argue that this melody isn’t inventive or pushing the boundaries of CCM. But there is so much heart and passion here, that I reckon it’s still extremely hard to hate on this song. “Come What May” wouldn’t have been my pick for a lead single, however the melody speaks so much truth, and lyrically inspires us all… and before long I’m tapping my toes and singing along to this catchy and poignant tune. As Darren emphatically relays that ‘…in every high, in every low, on mountaintops, down broken roads, You’re still my rock, my hope remains, I’ll rest in the arms of Jesus, come what may…’; we are presented with an honest and moving revelation that no matter what, Jesus is right here beside us, guiding our way even when we can’t see it.

The rest of the album is just as hopeful, powerful, compelling and thoroughly enjoyable as the two openers. “Now It’s Our Turn”, a powerful declaratory anthem, is filled with gratitude, with Darren thanking God for forgiving him; but then Darren poses a challenge to the rest of us, declaring that it’s our turn to live a life that God would be pleased of- after he’s rescued us from hell and the grave. While “God You Are”, a melody that is a personal highlight, features Josh Baldwin, and speaks about the kind, unending, and beautiful qualities of God, with both Darren and Josh eloquently expressing that ‘…it’s in the empty tomb, it’s on the rugged cross, Your death-defying love is written in Your scars, You’ll never quit on me, You’ll always hold my heart, cause that’s the kind of God You are…’. “Friend Of Sinners”, thematically similar to Casting Crowns’ song “Jesus Friend Of Sinners”, is another personal highlight, simply because the track explains that we’re all worthy and we’re all welcome to join at the table of God and to sit at the feet of Jesus; and “Million Miles Away”, one of the most vulnerable and emotional songs on the album, dives deep into the concept of mental health issues, identity issues and depression. A song that isn’t Christian in nature, “Million Miles Away” is still poignant and relevant for these times, and the track reminds me thematically of something from Dear Evan Hansen- as Darren expresses that ‘…I need someone to hold me, some help to come my way, cause sometimes the weight of being me is more than I can take, and I need someone to love me, some help to come my way, cause sometimes heaven feels a million miles, a million miles away…’, we aren’t gifted any easy answers here, but sometimes the fact that we’ve realised that we aren’t alone, and that others are feeling exactly what we are; is sure to bring comfort and healing in and of itself.

“Keep The Faith”, a inspirational melody that encourages us to stand firm in our faith and to keep pressing on even in the midst of trials and suffering and hardship, powerfully reiterates that we can hold on and we can press on because we know of the promises of God and the faithfulness of God mentioned countless times in the Bible; while “Close” (my absolute favourite song on the album!) is similar in theme with Jason Gray’s “Honesty”, and tackles the hot topic of wondering about the purpose of hard times. Then the song concludes that sometimes we don’t need to know the ways of God, as Darren earnestly sings out that ‘…maybe the why just don’t matter, what if it’s not for me to know, maybe the point is just to trust You, find the faith to let it go, cause sometimes falling feels like flying, it’s the only way I know, so I won’t hurry through the heartache, if it’s what it takes to draw me close…’. With the song being relatable and relevant for anyone going through a tough time (which is everyone, at one time or another), I’d say “Close” is THE song to listen to from Wholehearted. “Faith Sees Best In The Dark”, an uplifter and an encourager, is a lyrically simply yet poignant mid-tempo ballad, whereby Darren prayerfully relays to us that it is indeed in times of heartache, trouble and struggle, that our faith is tested and refined and sharpened- that it indeed grows best in the dark; while the acoustic guitar lullaby-ish ballad “Loved Like This” is a melody of thanks and gratitude, with Darren earnestly thanking God for loving him immensely and unconditionally, even when he was at his worst.

“Holding On”, an emotional and heartfelt melody, presumably from one friend to another, encourages us all to hold on because with friends, family and God with us, life will be all the more fulfilling, satisfying and rewarding. Wholehearted then ends with the Scottish traditional song “The Parting Glass”. With Darren including his own written spoken word testimony-type interlude at the beginning, this song tugs at my soul and at my emotions. With Darren delivering a ‘parting’ word of sorts, this melody is a fitting way to end the album; as he covertly and gently alludes to the theme of us all holding the album to our souls very deeply and us all hopefully gaining peace, joy, comfort and healing from these songs present.

Like most artists, our world kinda fell apart when touring got shut down. So we did what every good songwriter should do, we catalogued every feeling imaginable and tried to make sense of a strange new world. We danced in the darkness, wrestled with doubt, reconnected with God in a really authentic way, and found the beauty in the forced simplicity of our lives. We gave ourselves fully to the process of telling the truth again and not caring what the world thought of us. The album captures the heart of a follower of Jesus in one of the most wonderful and horrific times we have faced in modern history. We went all in, held nothing back. This one is Wholehearted.

Just like that, the album ends. With 5 bonus songs though included on the deluxe edition (“Come What May” sung with Cory Asbury- studio and acoustic, acoustic versions of “Wholehearted” and “Friend Of Sinners”, and an acoustic version of “Image Of God” with Vince Gill); Wholehearted is emotional, personal and honest. It’s not as flashy nor grandiose. It’s sometimes cliché lyrically, but there’s that sense of rawness and realness about the album as well. And thus, as I finish listening to this exquisite and unique listening experience, there is only one thing left to do, and that’s to press repeat. Truly, Darren, his wife, and his band of spiritual brothers have created something special. Though this album is not as enjoyable as any album from Rend Collective (the other Irish band I am loving at the moment!) Wholehearted is still worth a listen, as I pause, sit, ponder and reflect upon what Jesus has done for me. I can’t wait to hear the full album #4 from We Are Messengers (yes, I know, I’m very excited!), whenever that arises! Keep up the good work guys!

3 songs to listen to: God You Are, Friend Of Sinners, Close