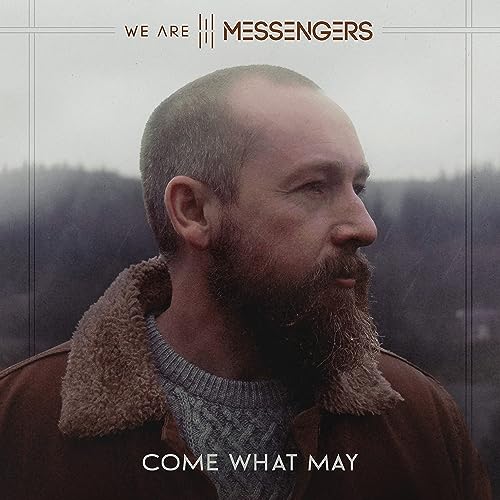 We Are Messengers – Come What May – Single (Amazon mp3/iTunes)

We are Messengers are a band that are the unassuming type- not much of a grandiose presence on social media, no song that charts real high on the Billboard charts, basically a band that has been ‘there’ since their inception in 2016, and their self titled album that brought with it songs like ‘Point to You’, ‘Magnify’ and ‘Everything Comes Alive’. Lead singer Darren Mulligan and the rest of the band have crafted a music career full of hope and honesty, as we see, in my opinion, one of the most underrated new-ish bands to ever emerge into the spotlight within the last few years. Originally from across the pond (Ireland), Darren, his wife and family moved from Ireland to come over the U.S., and what eventuated from there was a band that is by far one of the most interesting and heartfelt to have occurred within the last few years. Fast-forward to 2019, and Darren and co. unveiled to us Honest EP, a follow-up to their critically acclaimed self-titled debut album in 2016. On the EP was the song ‘Maybe It’s OK’; arguably one of the most emotive and vulnerable songs I’ve ever heard in a long, long time. In 2020, the band unveiled to us their second full-length album in Power (of which ‘Maybe It’s OK’ is a part of), alongside other standout songs like ‘Love’, ‘Power’ and ‘Never Stop Singing’. Standing at 12 tracks long, the long wait from fans of this Irish American group was certainly worth it- with the band creating a musical atmosphere not dissimilar to something that Rend Collective or Delirious? would do…and that is a very, very good thing. Fast-forward even another year to 2021, and we see yet another offering from the band- this time it’s ‘Come What May’, a song that could potentially serve as the first glimpses into a brand-new album in the works, or maybe could just be a standalone single on its own.

‘Come What May’ is a song that ticks all the right boxes. It has soaring harmonies and a great melodic hook. It has Darren’s trademark Irish accent coming through in the song, as well as the song itself being one of triumphing over whatever comes our way. And titling the track ‘come what may’ is indeed a reminder of our own need to keep watch, stay vigilant and be prepared about whatever comes our way in life, and to stand firm on the promises God has made for us. But the song in general? Not as memorable as I wanted it to be, nor is the song as catchy as other tracks like ‘Everything Comes Alive’ or ‘Maybe It’s Ok’. I wasn’t as engaged in the song as I probably wanted, nor did I even want to be excited about whatever comes next from the band, if this song ‘Come What May’ is any indication of what is coming next. No, the song isn’t bad, by any means. It’s just that for me, it didn’t ‘grab’ me as much as I thought it could’ve.

‘Come What May’, being the first single, the band has done that could potentially be part of album #3, seems to be paling in comparison to ‘Maybe It’s Ok’ and ‘Everything Comes Alive’- the first singles from Power and We Are Messengers respectively. And though I’m sure Darren has placed his heart and soul into ‘Come What May’, for me it wasn’t as inviting, second time around. First time is good though, you’re exploring a new song, and regardless of the quality, a new song is always intriguing. But hearing it again and again, you’re not as excited as you were before…which is exactly what I felt when I heard ‘Come What May’ the second time. For the band can still still produce albums just as engaging and poignant as any other, even if their current single isn’t as engaging. Though not as popular as other bands like Tenth Avenue North and Switchfoot; Darren and co. have nevertheless presented a song that may not be first choice-listening to me; but can still impact someone else. Regardless of how I feel, “Come What May’ nevertheless is an indication to what album #3 could look like, and maybe, just maybe, more songs that drop throughout the rest of the year, can be more exciting than this track.