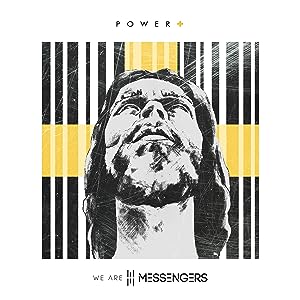 We are Messengers – Power + (Amazon mp3/iTunes)

We are Messengers are a band that are the unassuming type- no grandiose presence on social media, no song that charts real high on the Billboard charts, basically a band that has been ‘there’ since their inception in 2016, and their self titled album that brought with it songs like ‘Point to You’, ‘Magnify’ and ‘Everything Comes Alive’. Lead singer Darren Mulligan and the rest of the band have crafted a music career full of hope and honesty, as we see, in my opinion, one of the most underrated new-ish bands to ever emerge into the spotlight within the last few years. Originally from across the pond, Darren, his wife and family moved from Ireland to come over the U.S., and what eventuated from there was a band that is by far one of the most interesting and heartfelt to have occurred within the last few years. Fast-forward to 2019, and Darren Mulligan and the band, unveiled to us Honest EP, a follow-up to their critically acclaimed self-titled debut album in 2016. On the EP was the song ‘Maybe It’s OK’; arguably one of the most emotive and vulnerable songs I’ve ever heard in a long, long time. Now in 2020, the band unveiled to us their second full-length album in Power, of which ‘Maybe It’s Ok’ is the only inclusion on the album track-list, alongside other standout songs like ‘Love’, ‘Power’ and ‘Never Stop Singing’. Standing at 12 tracks long, the long wait from fans of this Irish-American group was certainly worth it- with the band creating a musical atmosphere not dissimilar to something that Rend Collective or Delirious? would do…and that is a very, very good thing. Fastforward even another few months, and we’re also given another offering from the band- this time it’s Power +, inclusive of all of the songs on Power, plus a new track, ‘Image of God’.

I recently reviewed the album Power in March 2020, and so it can seem redundant for me to rehash what I said previously, here in this ‘review’- and so here is the link for the review of Power, but what I will say is this- releasing a deluxe edition of any album, with just one extra track, can seem a little weird. Maybe the want to re-release the album now- because they didn’t get as much traction then. Regardless, there’s only one new track comparing this version of Power and the previous one- ‘Image of God’. Maybe it would’ve been better to just release ‘Image of God’ as a standalone single? Whatever the case, ‘Image of God’ stands at track 13 on Power +, as we see a song that’s timely for such a time as this in 2020- we are made in the image of God, that is our identity. We are loved unconditionally by our Father in heaven, and that is where our light and worth comes from. With a song that carries a great big weight as this, we see that in a ‘post’-COVID-19 world, we need reassurance that our worth doesn’t come from our work we endevour to accomplish, nor does it come from what people say we are or aren’t. ‘Image of God’ reminds us of where our worth truly resides in- in Christ who is the image bearer and shows us who we are in relation to who He is and what He’s done for mankind, ourselves included. ‘Image of God’ may have had better sales if it was just on its own as a single, but who am I to know? Power + is here, and maybe, just maybe, ‘Image of God’ can impact people in a way that other songs on their sophomore album couldn’t.

‘…sometimes I look at my life and I feel like that person, he is some kind of stranger. Like a man that I heard about but it wasn’t really me, and then all of a sudden in the present, your past can come to haunt you. That’s a hard thing to discuss, that even as a Christian, we still wrestle daily with our own flesh; we wrestle daily with the mess of our humanity and the mistakes that we’ve made. But God continues to prove Himself gracious, and merciful and kind, and I hope that we learn to treat each other with the same grace and mercy that we’ve received ourselves…A lot of your ‘Christian personalities’, or whatever you want to call them, I think people need to remember that we’re still really messed up. I don’t struggle any less with sin now than when I wasn’t a believer, it’s just now I tend to fall on the grace and mercy of God, or I tend to listen to Holy Spirit before I do something stupid. That’s not to say I don’t mess up – ’cause I really do, [but] we need to stop holding people to these perfect standards because there’s no-one good, and no-one perfect. It can be really difficult as a Christian, and especially one with some kind of ‘notoriety’ to actually just tell the truth about yourself; because [Christians] should be the most forgiving, kind, tender, wonderful people, but we tend to crucify people for things when Christ’s already been crucified for those things…’ It is in this quote that I appreciate this band all the more, and Power + is just a reminder that such a band like this, a band that isn’t as popular as other bands like Tenth Avenue North and Switchfoot; can still produce albums just as engaging and poignant as any other. And with standout songs on Power + being songs like ‘Maybe It’s Ok’, ‘Never Stop Singing’, ‘Image of God’, the title track and ‘Knock Me Down’ to name a few; Darren and co. have crafted an album (unveiled in January) and their most recent single, as one that I’m going to continues listening to, on a repeated basis as the months continue to roll on by. Well done We Are Messengers for such a relevant and identity-affirming ‘deluxe edition’ album, looking forward to listening to this album on repeat for the upcoming months ahead!