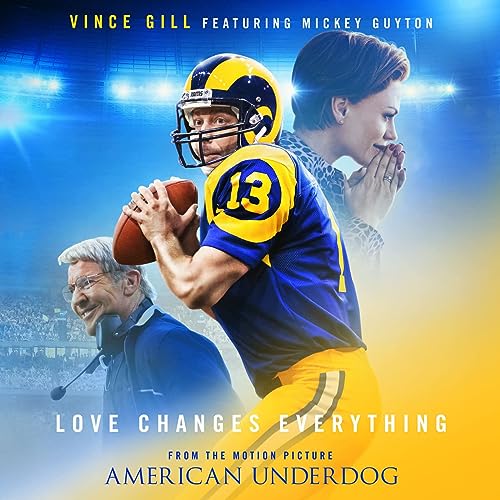 The other day I saw the movie American Underdog. Starring Zachary Levi, Anna Paquin and Dennis Quaid, and based upon the incredible true story of the rise of Kurt Warner from shelf stocker (is that the best word? Maybe a night filler?) to NFL fame in the late 90’s/early 2000’s; the faith-based/sports film was directed by the Erwin Brothers (who also directed I Can Only Imagine, I Still Believe and October Baby), and released last year on Christmas Day. For me personally and for this site, we haven’t reviewed movies since Superintelligence early last year. And the reason for this is that in my own opinion, there hasn’t been a movie that has stood out to me, that has impacted me so much that I wanted to and needed to review it to voice my opinions and encourage you all to watch the movie. Perhaps the movie that will usher me back into reviewing movies is American Underdog. Or maybe it won’t be. Maybe the next movie review might be Spiderman: No Way Home or Doctor Strange: Multiverse of Madness. Maybe I’ll keep you guessing. Whatever the case though, I found American Underdog to be one of the most inspiring movies and feel-good movies of the year, and Zachary Levi’s performance as Kurt Warner is probably the best of his career thus far.

So why am I briefly touching upon this movie if I’m not reviewing it at this point in time? Well… because I was so touched, inspired and moved by the end credits song of the film. “Love Changes Everything”, with Vince Gill (husband of Amy Grant) and up-and-coming country artist Mickey Guyton; is a song that just needs to be heard to be believed. Similar in impact and power to H.E.R.’s song “Hold Us Together” from the movie Safety; “Love Changes Everything” is a piano ballad that passionately and eloquently imparts to us the true meaning of love we have for each other and for God, and the true meaning of the love of God for all of and each one of us. The meaning of love is that it’s this action, this decision that thinks not of yourself but of other people. Love is something that isn’t self-centred and love overflows to other people. When you truly love someone or something, it really does change everything in the world around you and the wider world that isn’t around you at the moment. And as Vince and Mickey both fervently and skilfully sing this melody to perfection; we are ushered into a moment of honesty and vulnerability, as we hear the truth that ‘…Love can break your heart and heal your soul, warm the wonder years if you’re young or old, when you start to fall, back’s against the wall, makes you fly, fly, fly with a broken wing, Love changes everything…’. Reminding me of 1 Corinthians 13 and for KING & COUNTRY’s song “Proof Of Your Love”; “Love Changes Everything” is a must-listen, and a powerful melody to dwell upon and think about.

I myself am not really an avid fan of Vince Gill. But Mickey Guyton released a stellar and near-flawless debut album, and she is just going from strength to strength. No doubt this song may boost more of Mickey’s career than Vince’s; but that’s neither here nor there. “Love Changes Everything”, even without the context of American Underdog and the powerful story of Kurt Warner, is a heart-warming melody in its own right. Lovers of music (yes, of all and of any genres of music!) should listen to this melody. Even if it’s not in your preferred genre; it will still speak! So… what are you waiting for? Hop to it- this song won’t listen to itself! Well done Vince and Mickey, I can’t wait to hear what God has in store for you next!