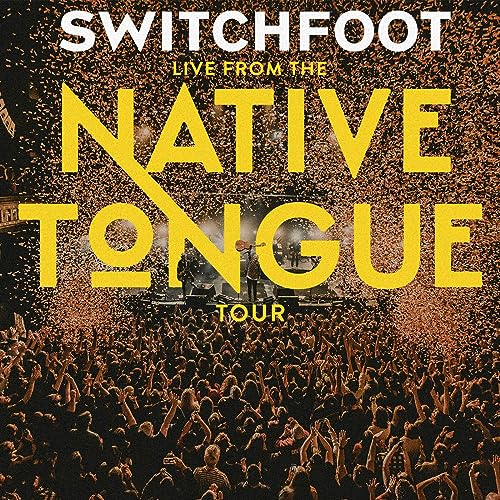 One of the most loved bands ever is Switchfoot. It’s pretty evident when fans, critics, and even those of us who weren’t really connecting with the band on a soul level, wished them well when they announced rather suddenly that they’d be going on hiatus from the end of 2017 onwards. While I was welcoming their well deserved break (because Jon Foreman, Tim Foreman, Drew Shirley, Jerome Fontamillas and Chad Butler have been going at being a band for the past 20 something years!), in the back of my mind I thought the band was done, and would be another dc Talk- fans wishing for a reunion but never having that wish fulfilled. However just this past January, NATIVE TONGUE, the band’s 11th studio album, released to all digital retailers and to all physical store outlets. The band’s hiatus was officially over- and if you want to read about my thoughts on the album, you can read about it here!

While I have rated NATIVE TONGUE an almost perfect score, it seems Jon and co aren’t just content with just a studio album of their latest material- because Switchfoot have now unveiled a brand new live EP titled Live From The NATIVE TONGUE Tour, which showcases a few of the studio album standouts on NATIVE TONGUE now sung live. Switchfoot have never really done a live project per se, as in something of a professional live CD/DVD akin to Skillet’s Comatose Comes Alive or TobyMac Hits Deep Live, so anything slightly resembling the group in a live setting like this EP is going to pique my interest. Because I am positive that attending a Switchfoot concert in the future would be a pretty awesome experience (and one that I aim to do at least once in my lifetime!), until such a time when the band travel to Australia or I travel to the U.S., this EP will have to suffice. The album isn’t perfect (because, it’s an EP, of songs from NATIVE TONGUE, and not a live ‘greatest hits’ project which would have been much more fitting as they describe their journey and open a new chapter of a book that’s yet to be written!), yet it gives me a taste of what a Switchfoot concert would sound like, and for that I am grateful, and still anticipating the day when I can and do see them live.

With Switchfoot’s new studio album being thought provoking and challenging, it is their live EP that adds an extra dimension into how I? see these guys. With Jon’s passion being second to none in this ever changing and evolving musical landscape, no doubt a full length live project will follow in the coming months or years. I still can’t wait to hear more of Switchfoot’s new music (studio or live or both- as I reckon another album will follow suit soon; the band I’m sure will write songs based on Jerome’s cancer ordeal!), but as it stands, NATIVE TONGUE is one of my favourite Switchfoot studio albums behind Vice Verses, Fading West and The Beautiful Letdown. While this live EP could have been longer, I loved the way it was done, and these guys need to be congratulated for both the EP and the album, and any future albums- because Jon, Tim, Chad, Drew and Jerome are geniuses, don’t you think?