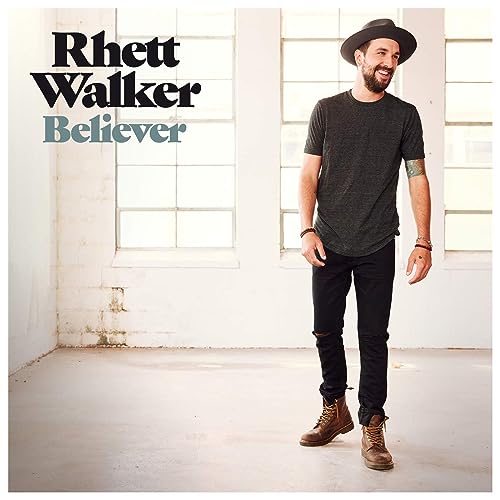 Releasing their debut album Come To The River in 2012, and featuring the smash hit “When Mercy Found Me”, and subsequent singles “All I Need” and “Come To The River”; Rhett Walker Band followed this release with their first Grammy nomination and first of several Grand El Opry appearance- Come To The River earned a special place in my heart as the album that was one of the first ‘country’ albums I had listened to from start to finish. Looking back though, sure, Rhett Walker Band wasn’t as country as artists like Martina McBride, Carrie Underwood, Rascal Flatts, Keith Urban and Maren Morris; yet it was still nonetheless foreign in terms of the music I was listening to back then. Yet for one reason or another, I found myself loving this brand of country/pop that Rhett was immersed in, more and more. This sentiment even increased when I listened to the band’s follow up album Here’s To The Ones in 2014. Rhett added rock to the mix and now this hybrid of genres was something that was unfamiliar yet also fresh to the overall Christian music genre. With “Broken Man” and the title track being the two singles, Rhett Walker Band continued to stretch my musical preferences in so many ways.

Though with the band’s sophomore album showcasing some of the most vulnerable writing I had heard in 2014, it was quite a surprise for me to hear that in early 2016, after more than a year of radio silence, the band broke up, and released a statement via Facebook. I’m not sure if that statement can still be accessed or read, but the fact of the matter is that perhaps Here’s To The Ones wasn’t as popular as the band would have liked, or maybe writing for a 3rd album became gruelling and a chore. Nevertheless, the band called it quits, and I never expected them to release anything new. In my mind, that chapter was done.

Yet in 2017, Rhett Walker Band resurfaced. He unveiled a new song “I Surrender”, as well as a self-titled EP last year (of which you can read our reviews here and here!)- and I guess you could say that the ‘hiatus’ of sorts has led Rhett to come back to music, come back doing what he loves, and with a renewed focus that will hopefully propel him to greater heights than before, and more inspiring albums. Though I’m not sure if the band is getting back together again, or if it’s just Rhett on his own with his band moniker (there’s only a picture of him on the single cover!), I guess it hardly matters when you listen to the song and the profound, relatable and relevant lyrics. Whether it’s Rhett Walker Band or Rhett Walker makes no difference to me, and shouldn’t to everyone, especially when we understand that these new songs are special, and probably wouldn’t have been recorded and sung by someone else if Rhett didn’t want to step back into music again.

Which brings me to this ‘review’, or probably just a quick plug for his new song. See, just this past week, Rhett has unveiled “Believer”, the brand-new single under his solo name (and not the band name, which is interesting!) A bit more laid back and reserved than usual, a bit less country and a little more piano pop; this testimony-type track is probably one of the most inspirational, emotional and personal tracks of the year. As Rhett ardently and eloquently pours out his heart and relays that Jesus has saved him and now he’s a believer; I reckon it’s songs like these that can change the world- songs written from the heart and songs that are relatable no matter what you believe. Though it’s early days, I do have high hopes and expectations for “Believer”, and I’m sure God will propel Rhett to wherever He wants him to go, through the medium of this song!

Boy have I missed Rhett Walker Band and their music. Or is it just Rhett Walker now? Anyway, nitpicks and semantics aside, while releasing this vibrant and emotional single may or may not result in a full length 3rd album for the band, or a ‘debut’ album for Rhett as a solo artist, “Believer” is definitely a must listen, regardless if you love country or not. You’ll definitely be blessed and inspired! With similar musical and lyrical themes to Third Day, needtobreathe, Zach Williams, Jason Crabb and Building 429; Rhett has continued to turn my musical preferences on their head! This is one of the most memorable and enjoyable country/CCM songs since Zach Williams’ “Chain Breaker”. Maybe I should buy more country albums in the future, thanks to the Rhett Walker Band…