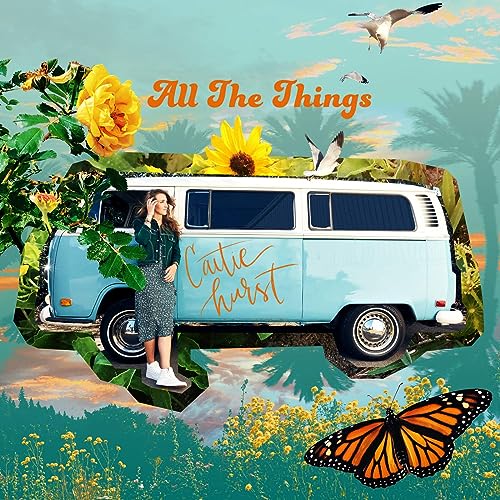 Out of every single ‘new’ or ‘newish’ artist that has possessed quite a lot of enthusiasm in their music, on their way to releasing their debut albums or debut EP’s, Caitie Hurst would have to be one of the most enthusiastic. Not to take anything away from The Young Escape, Aaron Cole, Austin French or Riley Clemmons (who are each unique, powerful and emotive in their own right!), but something about Caitie’s debut EP How Could I Be Silent that has captured my attention and had me completely won over. But if you’re unfamiliar with Caitie’s music, let me give you a crash course. Caitie Hurst is one of the latest artists to sign to Centricity Music, home of seasoned veterans such as Jason Gray, Plumb, Andrew Peterson, Jonny Diaz and Aaron Shust, fan favourites such as Lauren Daigle and Jordan Feliz; as well as up and coming artists such as For All Seasons, North Point Inside Out, Peabod and Carrollton. And if you want to know how her songs sound like- then maybe one of the best words would be pop. No, not the mindless pop we sometimes hear on mainstream radio, but more like the inspirational hopeful pop that is the kind of music I’d want to hear when I’m feeling down and uninspired. So while I rated How Could I Be Silent quite high when I reviewed the project last year, how does Caitie’s follow-up single “All The Things” rank amongst all the other songs in 2019? It’s extremely catchy, but does the song have that extra lyrical genius?

You have to keep in mind that “All The Things” is a pop song and Caitie is a pop artist. In that vein, the song is quite good for the niche market it’s going for- yet the track will never hold a candle to songs from Switchfoot or Andrew Peterson. With that statement, some listeners may be ready to disregard Caitie’s new music altogether because it’s not ‘deep and meaningful enough!’, however I reckon pop does still have it’s place in music. “All The Things”, on a deeper listen, does reveal some earnest, biblical truths, such as the fact that Jesus calling each of our names to follow Him, and wanting us to come to Him just as we are; and if we just purely think about music and listen to our ‘preferred genre’, we may miss out on something so profound that it could change our life around. But does that mean that “All The Things” will be influential in our lives just as much as “Live It Well” from Switchfoot, “You Say” from Lauren Daigle or “Head Above Water” from Avril Lavigne? Probably not, but maybe yes for at least one person in the world. With that in mind, I reckon Caitie’s done a really good job here, but I guess if pop’s not for you, you can wait and hold out for Caitie’s next release, which could be more of the same, or something completely different!

As far as follow-up songs go, Caitie Hurst’s “All The Things” gives us more of the same musically and lyrically…which could be a good thing or bad thing, depending on your view of the pop genre in general. However I reckon “All The Things” is pretty awesome, so you can take my opinion or leave it. But I guarantee that one listen will give you comfort and encouragement regardless if you love pop or not, so take a listen and who knows? You may just find your ‘summer jam’ today! With plenty of melodies in Caitie’s discography thus far being compelling, moving and poignant; I can definitely declare that Caitie will have a bright future in the coming years for sure. Caitie’s journey as a music artist is just beginning, and I for one am eager to see how she progresses over the upcoming years. Well done Caitie for giving us hopeful and encouraging music to listen to, ponder over and dwell upon; can’t wait for your full length album to release, later on this year!