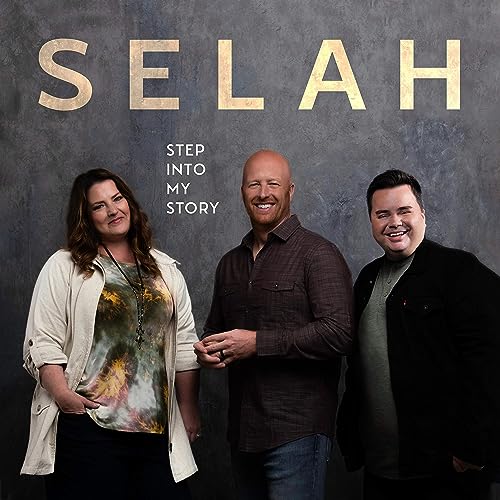 Having recorded and released a plethora of stirring and inspiring albums since their inception in 1999, vocal trio Selah (comprised of Todd Smith, Amy Perry and Allan Hall) have displayed to us and unveiled many heartfelt melodies and soft piano pieces with the intention of ushering us into communion with Jesus. Songs like “I Look To You”, “You Raise Me Up”, “All My Praise”, “Bless The Broken Road” (originally by country trio Rascal Flatts), “I Turn To You”, “You Deliver Me”, “I Will Sing Of My Redeemer”, “Wonderful, Merciful Saviour”, “Unbreakable”, “I Got Saved”, and “Hope Of The Broken World” all captivate and inspire us, giving us reason to praise God and celebrate our freedom in Him. And with Allan, Todd and Amy each singing eloquently, powerfully and beautifully, and delivering praises to Jesus, as well as bringing to the fore words of encouragement and impact; it’s no wonder each of these three vocalists have recorded solo albums- each resonating with me deeply! We’ve reviewed each of their solo albums here, here and here!

Already having released their first hymns album Greatest Hymns in 2005 and Greatest Hymns Vol. 2 in 2016, it’s clear that the recently independent trio have become somewhat an expert at covering hymns, also particularly since previous albums such as Unbreakable, You Amaze Us, Hope Of The Broken World, You Deliver Me, Bless The Broken Road and Hiding Place each contained a fair chunk of reworked hymns in their track lists as well. For the group’s most recent studio album Firm Foundation, which released last year; these guys switched it up- the trio’s all new full length studio album contained emphatic and powerful originals as worship anthems, instead of any hymns. It’s a tad out of the norm to hear the absence of a single hymn here, however Todd, Allan, and Amy once again wowed us and showed us their brilliant vocal melodies and harmonies, and I was once again swept away in wonder and awe, as the Holy Spirit’s presence is evident on every track of this unique worship experience. We reviewed Firm Foundation here, so take a read! Now just over a year later, the group has unveiled a new album. Step Into My Story is a return to what these guys are known for. Released independently through their own label 3Cre8tive, the 10 track part hymn, part worship project, is a little bit foreign to me (as there are indeed obscure hymns here!); but let’s still dive in to see how Selah introduce us to new original favourites, and heartfelt classics.

We get letters and emails and people telling us after shows that they’ve let us into some of their darkest moments and I think it’s because we aren’t afraid to sing about hard things. Sometimes, people tell us that while their loved ones were dying of cancer they were singing our songs to them as they were passing.  Words can’t describe how that makes me feel.  To be let into those moments and for us to have that privilege – that God has let us take the gift of music and share it and do something that could help someone – is special.

Immediately my eyes travel down to the Bethel Music and Phil Wickham penned “Living Hope”. Led by Amy, this version stays faithful to the original version… yet doesn’t pack the same punch as Phil’s original recording from 3 years ago. Nonetheless, it’s enjoyable, and reminds me of the power of a song- a song that is set to be as timeless as maybe “Amazing Grace” or “How Great Is Our God”, as the trio eloquently relays to us a vivid account of the gospel, reminding us in my favourite part of the song that ‘…then came the morning that sealed the promise, Your buried body began to breathe, out of the silence, the roaring lion, declared the grave has no claim on me…’. Obscure hymns like “God Lead His Dear Children Along”, “He Leadeth Me”, “Joshua Fit the Battle” and “Shall We Gather At The River / the Water Is Wide” are also given the Selah treatment, as well as familiar tracks like “What A Friend We Have In Jesus” and “Nothing But The Blood”. I myself though am drawn to hymns like “Holy, Holy, Holy”, “Blessed Assurance”, “I’ll Fly Away”, “It Is Well”, “Jesus Paid It All”, “Turn your Eyes Upon Jesus” and “I Surrender All” (all of which Selah haven’t covered yet to my recollection!); so unfortunately, these 6 ‘hymns’ don’t tug at my heart as I thought that they would.

That’s not to say that the only ‘good’ song Selah has on this album is “Living Hope”. The three original songs more than make up for the lacklustre offerings scattered throughout. Co-written with Michael Farren, the mid-tempo keys led ballad “When They Hear It” vividly depicts the change in people’s hearts and souls when they hear the gospel and hear the good news of Jesus Christ, as ‘…any time the truth’s released, it’s gonna set the captives free, you’ll see it, oh, you’ll see it…’; while Michael once again joins with Selah to cowrite “Hello Grace”. Also co-written with Travis Ryan, “Hello Grace” has an air of gratitude and thanks to it, as the radio friendly pop song admits a sense of need for Jesus and His grace and admits that we’re in need of a Saviour in our lives. And as the trio surrender their lives to the Author and Perfector of life itself; we are reminded to let God into the driver’s seat of our lives, and let Him lead- as with Him leading there will be much more of a sense of contentment and satisfaction. The title track is the final original melody, and is written with Mia Fieldes and Travis Ryan, as Amy leads a catchy and inspiring melody about giving everything over to God, about letting God step into our own stories and letting our live shine on Him, to remind people about His story. As Selah ardently remind us that ‘…You step into my story, make a way, set it right, do what only You can do, go behind and before me, every page of my life, You turn around and make it new, from glory to glory, You step into my story…’, we are reminded yet again that our live isn’t to make our name famous- it’s simply to point people to Him, and to make His name renown.

Already releasing their next album, even though Firm Foundation wasn’t that long ago, Selah seem to be more than filling part of the void left by Avalon, another vocal group who had been absent from recording for the past 5 years (who have since released their comeback album Called!). What Selah add to the CCM market, is soothing and beautiful harmonies and melodies, as each of the three vocalists Todd Smith, Allan Hall and Amy Perry sing to perfection, and deliver us some of the most popular and respected hymns and covers, as well as giving us originals sure to stand the test of time as well. Though the predominantly piano led and focused ballad heavy worship prominent album may not be to everyone’s tastes, as some may prefer rock music; Step Into My Story is well worth at least a listen- you may find yourself surprised at how much you enjoy the album, as you sing along with Selah praises to God, singing along with “Hello Grace”, “Living Hope”, “When They Hear It”, the title track and the hymns that make Selah, well you know, Selah! Well done guys, this project is enjoyable even though my own indifference of the obscure hymns. Een though this ‘mishap’, I can’t wait until your next album, which will be awesome!

3 songs to listen to: Hello Grace, Step Into My Story, When They Heart It