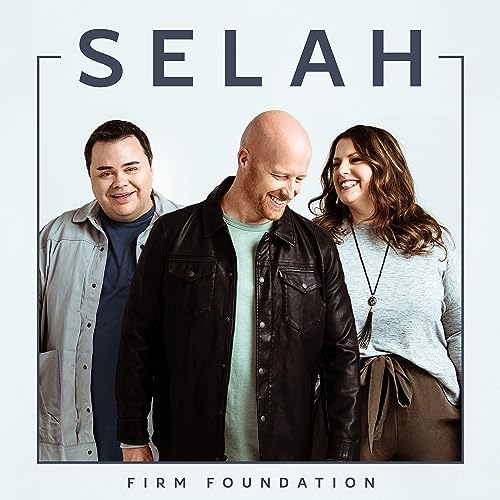 Having recorded and released a plethora of stirring and inspiring albums since 1999, vocal trio Selah (comprised of Todd Smith, Amy Perry and Allan Hall) have displayed to us and unveiled many heartfelt melodies and soft piano pieces with the intention of ushering us into communion with Jesus. Songs like “I Look To You”, “You Raise Me Up”, “All My Praise”, “Bless The Broken Road” (originally by country trio Rascal Flatts), “I Turn To You”, “You Deliver Me”, “I Will Sing Of My Redeemer”, “Wonderful, Merciful Saviour”, “Unbreakable”, “I Got Saved”, and “Hope Of The Broken World” all captivate and inspire us, giving us reason to praise God and celebrate our freedom in Him. And with Allan, Todd and Amy each singing eloquently, powerfully and beautifully, and delivering praises to Jesus, as well as bringing to the fore words of encouragement and impact; it’s no wonder each of these three vocalists have recorded solo albums- each resonating with me deeply!

Already having released their first hymns album Greatest Hymns in 2005 and Greatest Hymns Vol. 2 in 2016, it’s clear that the recently signed-to-Integrity Music trio have become somewhat an expert at covering hymns, also particularly since previous albums such as Unbreakable, You Amaze Us, Hope Of The Broken World, You Deliver Me, Bless The Broken Road and Hiding Place each contained a fair chunk of reworked hymns in their track lists as well. Yet for the group’s latest album Firm Foundation, which released last year; these guys are switching it up. Because the trio’s all new full length studio album, and first in 2 and a half years contains emphatic and powerful originals as worship anthems, instead of any hymns. It’s a tad out of the norm to hear the absence of a single hymn here, however Todd, Allan, and Amy once again wow us and show us their brilliant vocal melodies and harmonies, and I am once again swept away in wonder and awe, as the Holy Spirit’s presence is evident on every track of this unique worship experience. Now with an album that on the surface looks quite daunting in terms of track length, let’s dive in to see how Selah introduce us to new original favourites.

Album opener “Let The Saints Sing”, co-written with Michael Farren, is a solid, worthy opener, as we are introduced to an accessible worship anthem, easily able to fit on Sunday morning worship setlists in the future- and it’s an added bonus that the trio sing together powerfully and in perfect harmony; while the album’s 2nd song is the first single of the project, titled “Jesus Is King”. EDM and CCM in nature, this track is probably the most radio friendly that Selah have ever recorded, as Todd takes the reins vocally and emphatically relays that ‘…over the fears that we’re facing, over the prayers that we’re praying…over the war that is raging, every step that we’re taking, we know, oh, we know, Jesus is King…’. Though not as lyrically inventive and creative, sometimes you need songs like these- the catchy ones- to stick in your mind and remind us of the hope that we have found in Jesus Christ. Selah has indeed done that with these two opening melodies- and especially with the Unspoken-penned “Jesus Is King”!

Throughout the rest of Firm Foundation, Todd, Allan and Amy continue to impart to us eternal Biblical truths through song as well as creating inspiring worshipful melodies in order to sing praises to Jesus. The title track and heartfelt mid-tempo worship anthem is an album highlight, as Amy fervently cries out that Jesus is our firm foundation, that He is the rock on which we stand (thematically similar to the parable of the house on the rocks and the house on the sand!), and that whenever the waves come around and threaten to drown us, He is right beside us, steadying our balance and our way. While tracks like “Always Gonna Be” and “My Soul Be Satisfied” are of ‘radio’ or ‘single’ length at roughly 3 and a half minutes- but don’t let that bring you down, as the lyrics are anything but generic; with the former being a banjo infused country style track about the eternal truth that even in the hopeless of times, God is always going to be there for us, and the latter a contemplative and reflective acoustic guitar ballad led by Allan, relaying to us that it’s only with Jesus that our soul can be satisfied.

The midpoint of the album then arrives, and we are glimpsed with the most powerful track on the album, with “Yet Not I But Through Christ In Me”, a cover of CityAlight’s modern day hymn- and a brilliant cover at that- as all three vocalists sing together in perfect harmony, and channel their inner Pentatonix or Avalon vocally. Lyrically the track eloquently explains to us that everything we do in this life, especially to glorify the Father, isn’t our own actions and decisions, but really Jesus acting on our behalf through us. I’ve always admired Amy Perry’s exquisite voice and songwriting prowess, and on “The Sound Of Love”, we are treated to an absolute gem of a track written only by and also sung by Amy. Reminding us all that she is one of today’s most engaging female vocalists currently, Amy wonderfully knocks this song out of the park, as she vividly describes God’s love and it’s ‘sound’, authoritatively declaring that ‘…it is the sound of erupting thunder, it is the sound of a mighty rushing wind, it is the sound ringing through creation, the sound of love…it is the sound of a roaring lion, it is the sound of a Savior’s victory, it is the sound of a new revival…’.

Todd Smith then ardently covers Michael Farren’s poetic and wondrous acoustic ballad “I Belong To Jesus (Oh Hallelujah)- I actually can’t tell which version of the song is my absolute favourite!; while the trio once again shine vocally in the Keith & Kirstyn Getty cover and hymn like piano led melody “He Will Hold Me Fast”- which on the surface can be seen as ‘another hymn-like tune’ yet is in fact a gorgeous, empowering worshipful tune, as we declare the eternal truths of Jesus once more. “No Sweeter Name”, the penultimate song on Firm Foundation, is a hopeful, emphatic melody, and a personal album highlight, that basically recounts the ever-true notion that there is no other name than Jesus- a similar theme to Hillsong Worship’s “No Other Name”. Firm Foundation then ends with the Jennie Lee Riddle-penned spontaneous free worship like “Benediction (As You Go)”, similar to a prophetic type of prayer sung over us, a prayer that I myself would gladly claim in the name of Jesus Christ.

“…We are in a culture—kind of like in the days of Noah—where we’re living our own truth, doing what’s right in our own eyes and yet, there’s such a hunger from people to know that there is absolute truth. There is this firm foundation in scripture. There’s this firm foundation in who Jesus is…” Releasing their first album in just under 3 years (well worth the wait!), Selah seem to be more than filling part of the void left by Avalon, another vocal group who had been absent from recording for the past 5 years (who have since released their comeback album Called!). What Selah add to the CCM market, is soothing and beautiful harmonies and melodies, as each of the three vocalists Todd Smith, Allan Hall and Amy Perry sing to perfection, and deliver us some of the most popular and respected hymns and covers, as well as giving us originals sure to stand the test of time as well. Though the predominantly piano led and focused ballad heavy worship prominent album may not be to everyone’s tastes, as some may prefer rock music; Firm Foundation is well worth at least a listen- you may find yourself surprised at how much you enjoy the album, as you sing along with Selah praises to God, singing along songs like “Yet Not I But Through Christ In Me”, “Let The Saints Sing”, “No Sweeter Name”, the title track and the modern day style hymns that make Selah, well you know, Selah! Well done guys, I can’t wait until your next album, which will be awesome!

3 songs to listen to: Firm Foundation, Yet Not I But Through Christ In Me, No Sweeter Name