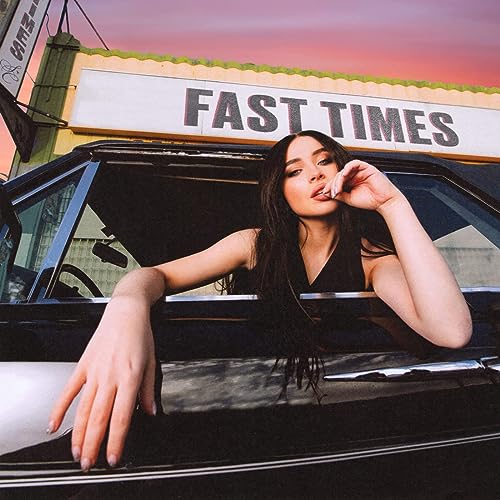 One of the rising pop stars at the moment is Sabrina Carpenter. An actress as well (Sabrina has starred in films such as Clouds, Tall Girl, Tall Girl 2 and Work It), Sabrina has inspired, comforted, encouraged, and provided us all with thought-provoking and confronting pop songs. In my own opinion, Sabrina is a different brand of pop- not the kind of superficial and party-pop that is permeated all throughout with expletives galore, but rather a deeper pop that discusses real issues, or at least a care-free pop that is just soothing and calming to listen to. I’ve known this for a while, and thus last year, I personally blogged about Sabrina and spoken at length as to why I believe she is one of today’s most influential ‘up and coming’ artists. Therefore with the release of Sabrina’s brand-new single “Fast Times” today, I thought- why not voice my thoughts on Sabrina’s latest song? Sabrina may have been underrated before, but with this song, she is sure stepping into stardom and fame and popularity very, very quickly!

In the past, I’ve voiced my brief thoughts about Sabrina’s previous singles “Skin” and “Skinny Dipping” and about how Sabrina as a singer and as an artist is evolving and pushing the boundaries on what pop music sounds like and what pop music should be about lyrically and thematically. I’ve also noticed that with Sabrina in the past, she has also sung about pertinent, relevant and relatable issues other than just ‘having a good time’- songs like “Thumbs”, “Eyes Wide Open”, “Why”, “In My Bed”, “Pushing 20”, “Exhale”, “Sue Me” and “Can’t Blame A Girl For Trying” all come to mind when thinking about songs that aren’t just superfluous and are all about gratuity and excess. I mean, sure it’s fine to have songs about partying once in a while, but songs about deeper issues and real things people are going through- that’s where the lyrical goodness is found! As for “Fast Times”, the dark and moody ‘slow’ pop jam speaks about how Sabrina’s heart can rule her head sometimes and that sometimes it’s better to trust your gut, take risks and live from your mistakes. A melody that is surprisingly deep when you dissect the lyrics, “Fast Times” has a very picturesque music video as well. And though this is the first track marked as explicit from Sabrina throughout her whole career, signifying her ‘growing up’ and transitioning into ‘darker’ and ‘edgier’ songs; the fact of the matter is that we shouldn’t let these words faze us, because the heart and message is still profound, moving, powerful and compelling. With Sabrina reminding us all, that even the quickest of decisions in life can still result in lessons learned and a growing development of your character; we are presented with the notion that though there are times when we need to be cautious, there are also times that we can be adventurous, carefree, and audacious.

With Sabrina Carpenter’s new song raking in the views on YouTube, I’m sure many of you may see this song as nothing but harmless fun with little or no meaning whatsoever. Yet for me, this song, though extremely catchy, packs a punch lyrically and thematically. Or at least that’s what I gleaned from the music video… Anyway, what I gained from the song may be different to what you yourself have gleaned from the melody. And that’s the beauty of songs. This song in particular is vague- and maybe that’s intentional. And thus, can I end this ‘review’ of sorts by saying that perhaps this song signals the beginning of the new Sabrina? With “Skin”, “Skinny Dipping” and now “Fast Times” all presumed to be present on a new album this year; can I add that I am super excited and stoked for the next full-length album from Sabrina! One listen to this underrated gem… and I’m sure you’ll all agree with me too! Well done Sabrina Carpenter, for this song with lots and lots of lyrical treasures to unpack!

I’m always told how fast life goes and to make sure I really live it to the absolute fullest and appreciate the moment I’m presently in, cause we don’t get any rewrites- so I wrote this to remind myself of that and hopefully this song makes you feel that way too. Too many people to thank that help my silly little visions come to life!! so I put them in this scroll. Go stream go watch go, go, go, fast, fast, fast

We weren’t taking ourselves too seriously making it, which really reflects the energy of the song. [It’s] really about the feeling when you’re letting life steer the wheel and you think ‘Let me enjoy this now and I’ll process the emotional repercussions of this later’. [It’s] very indicative of my 20s thus far.

I feel like it’s something a few artists do [give Easter Eggs in songs and videos for dates and things like that], and I feel like I just really have had an amazing relationship with my fans over the years, and they love being detectives and I like playing into it. Yeah, and then you can find the name of my album and you can announce it. ‘Cause it’s out there! [The new album] reflects a side of me that is yet to be heard. It feels almost unreal to talk about at this point, because you really grow into a new version of yourself in the process of making a body of work that’s so personal and something that you’ve really taken time with. I’m just so excited.