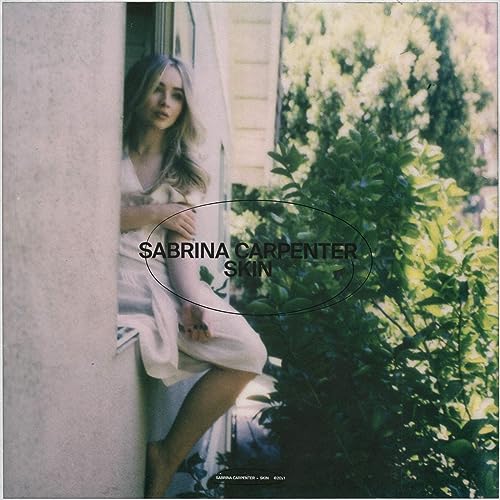 “drivers license” part 2 anyone? A love triangle between Sabrina Carpenter, Olivia Rodrigo and Joshua Bassett? Is there a reason why us commonfolk love to fawn over celebrities’ love lives or lack thereof? Sabrina Carpenter’s latest single “Skin”, released at the beginning of this year- and as I had just blogged about Sabrina and spoken at length as to why I believe she is one of today’s most influential ‘up and coming’ artists; I thought I would better voice my opinions about the song- I knew it’d be emotional, personal and thought-provoking, based on songs I’ve heard previously- but this level of raw emotion presented here… well it’s on another level, put it this way!

As I’m sure you’ve read my thoughts about “drivers license”, let me just say that “Skin” potentially could be a response to Olivia’s song. It isn’t confirmed that Olivia’s ex Joshua is now dating Sabrina and it isn’t confirmed that Sabrina is singing directly to Olivia, telling her that she can’t get under her skin anymore now that she is with Josh; but reading between the lines, and a deeper analysis of the history of these alleged relationships, implies this to be the case. For me though, who isn’t interested in a real life version of Dynasty or the Young & The Restless; can I just enjoy a song without looking for the deeper meaning? I mean the deep deeper meaning?

On first glance, Sabrina’s no-nonsense anthem is directed to the ex of her significant other- as she details that she’s ‘won’ now that she has him and that the ex cannot get under her skin. It’s a petty song, but as with how I read songs recently, and how I always try to find the deeper meaning, I have discovered that this song could be sung to a platonic ex-friend about another platonic friend. As we find out here (and ergo from “divers license” that friendships and relationships are messy), let us remember that Sabrina Carpenter has a thought-provoking ballad here with a lot of heart and emotion behind it. The song can be read in a variety of ways, and this song only has me further anticipating Sabrina’s upcoming album- due for release in 2021 sometime. And while we all navigate our own relationship and friendship issues, here’s hoping that Sabrina can offer up some words of wisdom- that ‘…I just hope that one day, we both can laugh about it, when it’s not in our face, won’t have to dance around it, don’t drive yourself insane, it won’t always be this way…’. Tension and animosity don’t last forever, and particular when you’re in high school or university- any grudge won’t last forever. Would it be a bad thing to say that maybe you could become best friends with your enemy someday? Something to think about! Well done Sabrina for this well recorded and highly thought out melody about the ups and downs of life- I can’t wait to hear what is next!