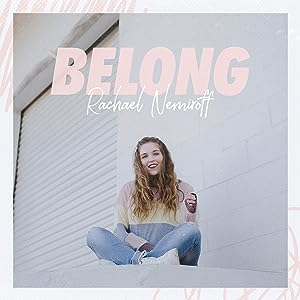 Rachael Nemiroff, a singer-songwriter with roots in New Castle, Pennsylvania; is quite possibly one of today’s most passionate and powerful indie-pop CCM artists, at the moment (although prior to her new song release in ‘Belong’, she’s only released 3 original songs prior, in ‘You Say’, ‘Heart of Stone’ and ‘Circles’). Attending Trevecca Nazarene University in Tennessee and playing local shows around Nashville has indeed solidified her singer-songwriter EDM/pop/CCM sound, which has now formulated into four original songs- ‘Circles’, ‘You Say’ (no not the Lauren Daigle song, but an original!), ‘Heart of Stone’ and now ‘Belong’. you can see my review of ‘Circles’ and ‘You Say’ here, and ‘Heart of Stone’ here. Mind you, this is not the first exposure to the CCM world that Rachael has had- prior to these releases, she released a series of cover videos, some of which include her versions of UNITED’s ‘Wonder’, Ellie Holcomb’s ‘The Broken Beautiful’, and Tauren Wells’ ‘Hills and Valleys’, the latter becoming a track to purchase on iTunes (that’s how popular her cover video on youtube was!). Now with a series of cover videos and four new original songs under her belt, I can say that Rachael and her music is as much needed in today’s society as anyone else’s- that her joyous personality, her infectious enthusiasm and zest for honesty in music, alongside the nature for her to produce good pop-worship music within a sea of endless possible avenues that seemingly sound similar to the one before; is what I reckon will lead her to new heights in the future.

‘Belong’ is a pop-electronic song along a similar musical line to that of either Cimorelli or Britt Nicole (ironically, through her Instagram feed, we see that Rachael is in fact very good friends with one of the Cimorelli sisters, Lauren Cimorelli!). Delivering a unique and fresh perspective of Christian pop music, ‘Belong’ is not your average song you’d hear on radio at the moment, and that’s ok. As said by Rachael herself in a recent Instagram post about the song and theme of it in general, ‘…if you’re feeling insecure, comparing yourself to others, not feeling enough, etc – take a listen [to the track]. When I was writing this song, I realized how much I needed reminders of how God sees me and that He creates each one of us UNIQUE and BEAUTIFUL in our own way. I hope that He can use this song to speak into your life wherever you’re at/however you’re feeling…’ Full of life and joy, this is a must have if you enjoy Christian pop, and enjoy listening to up-and-coming artists that are just infectious with joy. Rachael Nemiroff is one such musician that oozes out passion and heart in a good way. Considering that the world in its current state has a lot of people that feel that they don’t belong to whatever group is present at the moment; such a song like this is a breath of fresh air as we realise that we indeed belong to Jesus, and that our belonging or perceived lack thereof, is never going to change the love given to us freely by the Lord! As this song suggests lyrically, being sung from God’s POV ‘…you belong to me, and that will never change, don’t’ worry what they think, you’re more than just a face, you belong to me, no matter what you feel, those lies are just a dream, my love for you is real, cause you belong to me…’  a reminder we often need on a daily basis as we remind ourselves that we first and foremost belong to Christ, before any other institution or even structural unit. To grasp the concept that we belong to God because of what He has done rather than what we’ve tried to undertake can seem like a big thing to wrap our heads around, yet Rachael has allowed this song to open up a discussion about belonging as we understand that we who profess Jesus as our Saviour, belong to the kingdom of God, and nothing will ever change that!

Do you ever look in the mirror and quickly begin to point out your imperfections? …Finding all the things that are “wrong” with you and wishing, “If I only had what so and so has, or if I wasn’t so ______ (fill in the blank) I would be more beautiful?” I have. And to be honest guys, there are still times that comes up and I feel/think things like that. It’s definitely gotten better over the years, but I’m still human too. When those things come up & I begin to remind myself who I belong to and how He sees me. If you’re feeling or thinking any negative things about yourself today be reminded, that you are absolutely beautiful and created in the image of God. He sees you BEAUTIFULLY and WONDERFULLY, created in His image. Be gentle with yourself.

The above quoted excerpt is a reminder of the song in a nutshell, and that our belonging is irrespective of our feelings and what we believe to be true about ourselves. We belong to something, and as Christians, we belong to God. That is it! Nothing we do or say can erase that. I guess that begs into question the once-saved-always-saved argument, but that is for another day. At this moment, let us be reminded of our belonging in Christ, even if we don’t even ‘feel’ it. As catchy as the song is, the lyrics and heart behind it are both grounded in real, biblical truth. You can see Rachael’s heart and passion evidently in not only this song, but all her 4 songs throughout her career, something that I reckon is lacking in much of the music industry at the moment. You know when you come across something special? That is what it is with Rachael Nemiroff and her music. Loving the four songs she’s dropped, three in 2018 and one in 2019; and looking forward to whatever is in store in the future.