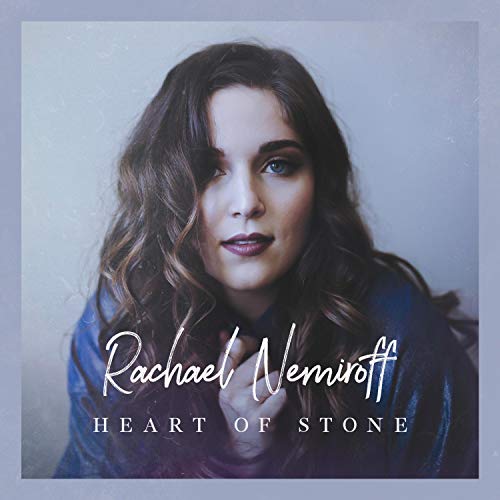 Rachael Nemiroff, a singer-songwriter with roots in New Castle, Pennsylvania; is quite possibly one of today’s most passionate and powerful indie-pop CCM artists, at the moment (although prior to this new song release, she’s only released two original songs thus far in ‘Circles’ and ‘You Say’!). Attending Trevecca Nazarene University in Tennessee and playing local shows around Nashville has indeed solidified her singer-songwriter EDM/pop/CCM sound, which has now formulated into three newly original songs- ‘Circles’, ‘You Say’ and her new song ‘Heart of Stone’- you can see my review of both ‘Circles’ and ‘You Say’ here. Mind you, this is not the first exposure to the CCM world that Rachael has had- prior to these releases, she released a series of cover videos, some of which include her versions of UNITED’s ‘Wonder’, Ellie Holcomb’s ‘The Broken Beautiful’, and Tauren Wells’ ‘Hills and Valleys’, the latter becoming a track to purchase on iTunes (that’s how popular her cover video on youtube was!). Now with a series of cover videos and three new original songs under her belt, I can say that Rachael and her music is as much needed in today’s society as anyone else’s- that her joyous personality, her infectious enthusiasm and zest for honesty in music, alongside the nature for her to produce good pop-worship music within a sea of endless possible avenues that seemingly sound similar to the one before; is what I reckon will lead her to new heights in the future.

‘Heart of Stone’, standing at a similar length to ‘You Say’ (a tad over 2:50), delivers a unique and fresh perspective of Christian pop music- not your average song you’d hear on radio at the moment, this up and coming singer-songwriter with a lot to give is creating music that is hopeful and encouraging, music that is fast becoming some of my favourites in 2018 thus far. And ‘Heart of Stone’ is no exception. As said by Rachael herself in an Instagram post not too long ago, ‘…this song is based on Ezekiel 36 & 37. It is the story of how our broken hearts can become hard as stone. Sometimes when difficult things happen in our lives our hearts can become hardened towards others/the world and we can then forget how to love. But His love never fails us, even though others will. He can take our heart of stone and breathe new life into the most desperate situations. Praying this speaks to you as you listen…’ Considering that the world in its current state has a lot of bitterness and anger, such a song like this is a breath of fresh air as we realise that we all have things that we hold onto but really shouldn’t, we carry around the burdens and baggages thinking we have to undertake this thing called life on our own. Yet as this song suggests, Rachael is reminding us to ‘…throw away this heart of stone, breathe life into these bones, let my life be Yours and not my own, cast away my fears and failures, I lay them down before You, Saviour…’, a reminder we often need on a daily basis as we navigate issues that may require us to hold onto the very things Christ longs for us to lay down, for fear of hurt or rejection or whatever the case may be. Holding onto things when we need to let go can be hard, yet Rachael and this song in particular can hopefully encourage us all to ask and seek the Lord even if we may not believe or want to throw down our hearts of stone, for whatever reason it could be!

‘…I truly believe the things God calls us to can seem very scary at times, but it’s SO worth it! The enemy would love nothing more than to see you take the “safe” route…. It has been helpful for me to identify the root of those fears when they come up • fear of the unknown, fear of judgement/rejection, fear of making the wrong decision so you don’t make any, fear of failure • Goodbye 👋🏼 😂 Yeah, they come up from time to time, but I choose not to be ruled by them or be held back my them! We’ve only been given one life here on this earth and it is a gift and it also goes by so quickly. Don’t let fear hold you back and keep you from stepping into all that He has for you…’ It is with this quote from a recent Instagram post that I give you ‘Heart of Stone’, a song that may not necessarily win any award, let alone any Dove or K-Love Fan Award. Nevertheless, Rachael and her music need not to be popular for it to impact- which is exactly what ‘Heart of Stone’ is- a song that has impacted me of late when it comes to my own walk with Christ. As catchy as the song is, the lyrics and heart behind it are both grounded in real, biblical truth. You can see Rachael’s heart and passion evidently in not only this song, but all her 3 songs she’s released this year, something that I reckon is lacking in much of the music industry at the moment. You know when you come across something special? That is what it is with Rachael Nemiroff and her music. Loving the three songs she’s dropped in 2018; and looking forward to whatever is in store in the future. And if her new music coming is as poignant and heartfelt as these three releases, just maybe, she’ll become my favourite new artist of 2018!