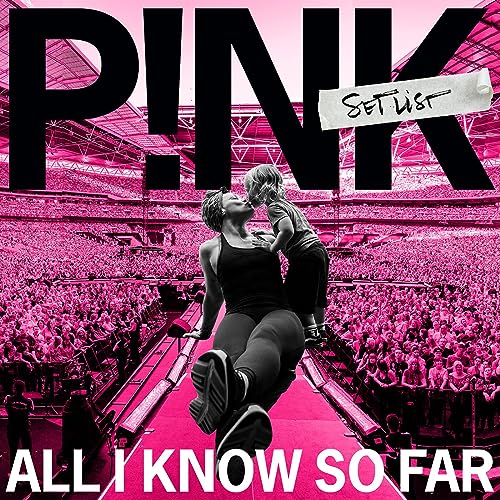 P!NK– All I Know So Far: Setlist (Amazon mp3/iTunes)

With the trend of pop stars being singers of lyrically simple party songs, Pink is a different breed of pop singer. She sings about what she is passionate about, she sings political songs, love songs, break up songs, party songs, introspective deep-thinking spiritual type of songs… Pink is all over the map in the best way possible, and I for one am glad I have blogged about her and I for one and glad I have listened to one of the most influential artists of this generation. A lot of people (I’m not saying all!), like to stay in their lane, not rock the boat and sing what they’re given by the songwriters. But Pink isn’t like the norm, and she challenges the status quo day and night. Is this reason for my assertion of her influence? Maybe, maybe. There have been many, many times in this blog series that I have mentioned that an artists is only as influential as how their life is portrayed outside of the spotlight. For Pink, her time away from the spotlight has been becoming a mother, working on her marriage, recording various guest recordings for other artists, and more and more songwriting. Pink’s legacy and icon status speaks for itself- and all of Pink’s songs are honest, emotional, real and authentic. There’s so many layers to her music- and I’d expect Pink to be recording for a long, long, long while yet.

A couple of years ago, I blogged about pop/rock singer/songwriter Pink, and her sustained influence in the music industry for around about the last 20 years and her impact she’s had on music for that time as well. I also surmised that she’s not done yet, and that there’s many more things coming our way that Pink has cooked and conjured up for us. Well, apart from the latest documentary All I Know So Far which looks extremely vulnerable, personal and emotional (which we all need to check out pronto!), Pink has recently released her latest album this past couple of months, titled All I Know So Far: Setlist. A live album, comprised of greatest hits, covers and all new studio recordings; 16 tracks isn’t enough to accurately cover 20 years of hits and fan favourites. But as perhaps this album is a companion piece to the documentary (and maybe should be listened to in conjunction with viewing the documentary!), quite possibly the songs were chosen because these songs were important to Pink herself. Perhaps I’ll gain a whole lot more from the album if I watch the film first. Regardless, this album… I’d say it’s for the Pink die-hard fans, the ones who know her songs inside and out, and the ones who hang onto her every word as being the absolute truth. Though I’m not there yet (as an avid fan), I am in the unique position of having blogged about her a couple of weeks ago, having listened to her entire discography 3-4 times over within a short time span. I have experienced virtually everything to do with Pink for the first time a mere two weeks ago- and shall I say that All I Know So Far: Setlist is profoundly and powerfully one of the most inspiring and impacting live albums I’ve heard in recent memory? Almost on the same level as TobyMac’s Hits Deep Live and for KING & COUNTRY’s Hope Is What We Crave?

Let me preface this by saying- that live albums are a mixed bag. As I mentioned in a review about Needtobreathe’s latest live album, recording live albums are tricky- and especially more so now because of COVID-19. Thankfully, for this project, the songs and documentary were recorded and filmed on Pink’s Beautiful Trauma Tour (March 1st 2018-November 2nd 2019)… so I guess there wasn’t a need for social distancing. Regardless, you’d also want the band or artists in question to be authentic and include raw audio of a special, unique and magical night (or nights, our tour in this case), yet you don’t want the recording to sound too bootlegish. So some post-production is needed. But you also don’t want the recordings to sound too similar to the studio versions, otherwise why record a live album? And song choice is paramount- and obviously this release isn’t extensive like a greatest hits project. For that you’ll have to check out Greatest Hits…So Far!. So how to accurately describe All I Know So Far: Setlist? I’d say it’s the soundtrack to the documentary film, and a great introduction to a Pink live show- but preferably not someone’s first introduction to Pink. I’d say either The Truth About Love, Funhouse or Beautiful Trauma would be great albums to start off with- and then this album can be listened to when you’re more of a semi-fan… like myself.

As I’m sure you’ve heard the songs already, I won’t bore you with a review. If you really want to read my assessment of these songs, you can check out my blog about Pink here. Hit singles like “So What”, “Who Knew”, “Walk Me Home”, “What About Us”, “Just Give Me A Reason”, “Funhouse” and “Just A Pill” have all stood the test of time and warmed all of our hearts- and Pink has eloquently recorded eclectic, vibrant and emotional live versions. Pink has also delivered worthy covers of “River” (from indie artist Bishop Briggs) and “Time After Time” (Cyndi Lauper), as well as really, really excelling at Queen’s smash hit “Bohemian Rhapsody”. “We Are The Champions” from Queen is also covered. Unfortunately though, Pink includes her MTV Video Vanguard Award Speech as a whole track in this project, and leaves me scratching my head. It’s an inspirational speech, but including it on an album, one track out of sixteen? Plain weird if you ask me. However, even if the album completely stank (which is doesn’t!), All I Really Know So Far: Setlist would be worth it for the two original songs that I would really like to make special mention of. “Cover Me In Sunshine”, a single from early this year featuring Pink’s daughter Willow, is as beautifully sung as it is sweet, as mother and daughter sing about their love and devotion to one another, with Pink earnestly crying out ‘…cover me in sunshine, shower me with good times, tell me that the world’s been spinning since the beginning, and everything’ll be alright…’; while “All I Know So Far”, co-written with Justin Paul and Benj Pasek, is as inspirational as ever, as the powerful single imparts infinite wisdom, and knowledge that your self-worth comes from inside of you, that ‘…you throw your head back and you spit in the wind, let the walls crack, ’cause it lets the light in, let ’em drag you through hell, they can’t tell you to change who you are, that’s all I know so far, and when the storm’s out, you run in the rain, put your sword down, dive right into the pain, stay unfiltered and loud, you’ll be proud of that skin full of scars…’. It’s an important concept to know, that the pain inside of you can subside if you know that anything is possible with determination and belief in yourself- and this track is one of my favourites of this year. There’s a very inventive music video as well… and you should all check that out as well.

In my blog post a couple of weeks ago, I started it by saying that mainstream music didn’t connect with me way back in 2018- now, let me say that I am a Pink fan and it’s because of her mostly that I am becoming more and more receptive to mainstream pop (with a message of course!). Sky’s the limit for Pink– perhaps it’s time to record a Christmas album, an acoustic album or a covers album? Either one of them or all would be great! So as we sit back and wait for Pink to release something new, let’s dive in deeper into Pink’s discography, inclusive of All I Know So Far: Setlist. For there is surely something we might’ve missed, and no doubt God will show me something completely different next time around. Or perhaps we will watch All I Know So Far? Well done Pink, for such a eclectic and vibrant career! I can’t wait to hear what God has in store for you next!

3 songs to listen to: Just Give Me A Reason, All I Know So Far, Bohemian Rhapsody