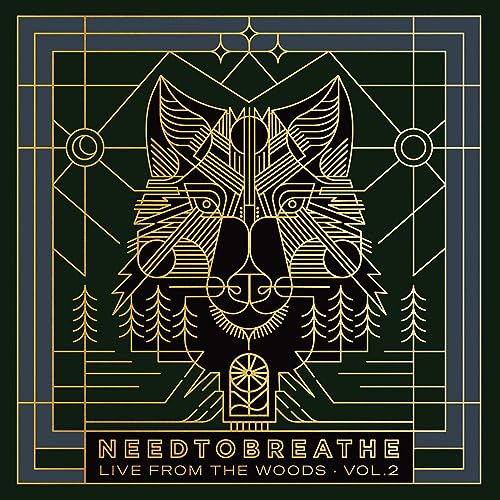 Currently right now one of the most popular and respected bands in both Christian and mainstream media markets (probably according to both listeners and critics; and alongside bands and artists such as Switchfoot, Owl City, Lifehouse, Relient K, for KING & COUNTRY, and Skillet!), Needtobreathe are a band whom I have increasingly been actively following and listening to over the past few years, and have been respecting more and more. Branching out and recording plenty of songs specifically directed to the mainstream media, the South Carolina quartet comprised of brothers Bear and Bo, and good friends Seth and Josh; with the four having wowed us again and again with their honest lyrics, catchy music and southern rock goodness, also providing us with plenty of inspiring and thought-provoking messages to ponder over as well.

With their most successful and critically acclaimed full length studio album HARD LOVE more than four years old (you can read my review here!), the 12 track collection of pop rock goodness showed us once again what a force Bear, Bo, Seth and Josh are right now, and how they’re definitely a band to be reckoned with both now and into the future. Providing us songs that compel us to dwell upon and ponder the deep issues of life, in their last couple of albums alone (Rivers In The Wasteland and HARD LOVE), there were plenty of songs that personally impacted and spoke to me, such as “Wasteland”, “Multiplied”, “Brother”, “Testify”, “Hard Love”, “The Heart”, “Happiness” and “Difference Maker”.. Fast forward to now, and here we are, blessed with another Needtobreathe release. Since that time in 2016, Bear’s brother Bo has left the band, and we’ve also been fortunate to hear new projects from the group, inclusive of Hard Cuts: Songs from the Hard Love Sessions, Forever On Your Side (Niles City Sound Sessions), and Acoustic Live Vol. 1; but now with a label change (from Atlantic to Centricity) and their Centricity Music debut Out Of Body, we are now presented with one of the most impacting Needtobreathe albums yet, and one of my absolute favourite albums of 2020! We reviewed the celebrated and much loved Centricity Music debut (read our review here!); but now it’s time for another live release from these friends and rockers.

As I mentioned in my review in 2015 of Live From The Woods Vol. 1; recording live albums are tricky- and especially more so now because of COVID-19. Given that this concert where the 15 songs were recorded were in socially distant shows in March this year, the need for vigilance in ensuring a safe concert was paramount. You’d also want the band or artists in question to be authentic and include raw audio of a special, unique and magical night (or nights), yet you don’t want the recording to sound too bootlegish. So some post-production is needed. Because this album just released but the concert was a month ago… this means it was a quick turnaround of post production- does this mean corners were cut? But you also don’t want the recordings to sound too similar to the studio versions, otherwise why record a live album? Thankfully, Needtobreathe exquisitely invite us into a near-flawless performance, as we hear the same passion, honesty and emotion previously bared in the studio versions (and also the same passion as Live From The Woods Vol 1 in 2015!), but also the live atmosphere and the emotions of the crowd as well. The result is song after song that I want to listen to again and again.

In my previous review of a Needtobreathe live album (you can view it here!), I went about detailing each song and what the songs were about and what they meant to the band, and how each live version sounded when contrasted to the studio version. Yet this year, as I’ve realised that there are more and more albums that have resonated with me that have released from this year and last year, and as I’ve also realised that reviews aren’t meant to be essays, and that sometimes saying less is actually speaking volumes and saying a lot; I’ll keep this review really brief. Simply said, these songs are exquisitely recorded- but please listen to the studio versions first to gain a better understanding and appreciation of the heart and meaning behind some of these poignant anthems. As Bear, Josh and Seth minister to your soul, let me all remind you that Needtobreathe is one of the most thought-provoking and confronting artists right now- just read Jon’s revealing blog about them as well. And as we let hard hitting songs like “Who Am I?”, “Banks”, “Hang On” and “Survival” speak to the inner most part of ourselves, let us always keep on keeping on and letting our eyes be fixed on Jesus. As the band praise Jesus overtly and covertly, let us remember that music is the universal language of the soul, and as long as the band are creating a space for honest and reflective discussion, then they’ve done their job quite well!

We always try to do different versions of the studio records. There are a lot of new songs we haven’t ever released in a live format. It seemed like a great idea to do it now when people are missing live music more than ever.

Every musician I’ve talk to is struggling with a balance. You want to be healthy in a way where you don’t need affirmations for the things you do. In normal times, when I go out on the road, I don’t need the audience to cheer in order for me to keep doing this and loving it,

But there’s something innate about being a musician—you want other people to hear the songs. It’s been blatantly clear in this time that we miss that feedback. There’s a balance to that: the reason we make music is for other people and to get in front of people and see how they respond. [This has] put some clarity on that.

We’re figuring out a lot of people can [make music] from their house and bedroom. It’s definitely a different kind of world where you can be stuck at home but still get work done and find creativity. I’ve talked to a lot of musician friends who’ve said, ‘Yeah, I’m learning how to use ProTools for the first time.’ And they’ve never wanted to do it, but now they know they have to. That’s exciting. Out of the hardest times in history, creativity comes to the light, and people make beautiful things.

We spent over a decade on the road. We were on the road more than we were at home. Everytime you come home, you’d have to adjust to being a husband and dad. It always took a couple days to switch over. Now, I’m feeling in a similar way. I’ve been home for so long, and I have to switch over to almost putting on this persona. You realize that what you had was so cool and so rare.

So there you have it- Bear, Seth and Josh have done it again, creating a musical and lyrical masterpiece in one of the strongest album lyrically, musically and vocally of 2021 thus far (alongside albums from Demi Lovato, Jon Foreman, Apollo LTD and Pentatonix!); as they examine and dive deep into issues that are relevant across society, while ensuring that their faith in God and testimony of how Jesus is who He says He is, shines through the music and lyrics! With “Hang On”, “Survival”, “Who Am I”, “Banks”, and “Child Again” all being my favourites on a stellar live album; I already can’t wait to listen to whatever NEEDTOBREATHE decide to do next! Well done Bear, Seth and Josh; I will definitely recommend your music to many of my friends and acquaintances! How about a Christmas album next? Or a hymns/covers album?

3 songs to listen to: Who Am I?, Banks, Survival