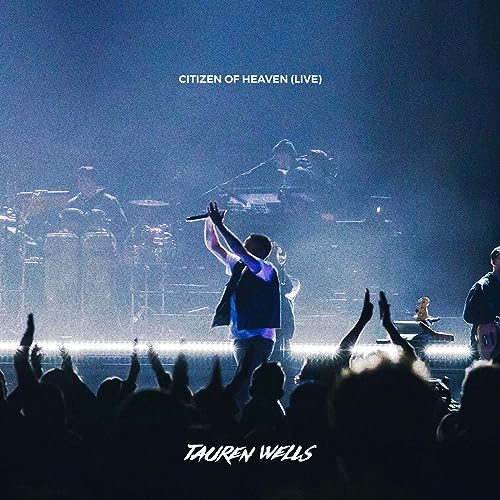 Tauren Wells is no stranger to music. After spending years as being the front-man of the moderately successful CCM quartet Royal Tailor in the early 2010s, a band that delivered powerful songs like ‘Remain’, ‘Ready Set Go’, ‘Making Me New’, ‘Make a Move’ and ‘Hold Me Together’, to name a few; after selling out arenas and going on tours with other artists like Capital Kings, TobyMac, and Building 429; the band decided to ‘go quiet’. They stopped touring. And while no official statement was made about the disbanding of the quartet until Tauren stepped out and released a new single, his first as a solo artist; it was unfortunate to see the band travel their separate ways, even if it meant for them to explore the other avenues that God had in store for their lives. While I reckon Royal Tailor’s best album was still to come, we would never know. Nevertheless; Tauren and his band parted ways, and Tauren Wells is still making music. He released his long-awaited ‘debut’ solo album titled Hills and Valleys in 2017; that produced standout songs like ‘Love is Action’, the title track, alongside poignant numbers ‘Never Gonna Let Me Go’ and ‘When We Pray’. Fastforward to 2020, and Tauren also released his ‘sophomore’ album (not counting the ones where he’s lead singer for Royal Tailor!) in Citizen of Heaven; with the sound of it being much more JT-like or even MJ-esque than ever before. Yes, Tauren’s music borrowed (for Citizen of Heaven at least!) a lot musically and stylistically from his mainstream contemporaries like Justin Timberlake and Michael Jackson, and that isn’t necessarily a bad thing.

With songs like ‘Miracle’, ‘Famous For’, ‘Like You Love Me’ and ‘Until Grace’ being the highlights from Tauren’s latest full-length album; we are reminded through this musical offering, that music is music, and if God can speak through the unlikeliest of heroes in Balaam’s donkey or a burning bush, then He can certainly speak through MJ or JT, or Tauren’s new album as well. Now here we are in April 2021, and Tauren’s new offering is in the form of a live project. And especially now during COVID-19, and live concerts are still on hold at the moment, this album is probably the next best thing. Citizen of Heaven Live was recorded by Tauren and his team at Lakewood Church in January 2020 as a launch event for Citizen of Heaven. Standing at 15 tracks, this album is a great one if you’re a Tauren Wells fan, a Royal Tailor fan, or just a fan of CCM, period!

‘…my favorite thing about creating an album is anticipating what the live versions of the songs will become. Having a song come alive for the first time in the writing room or the studio is a crazy feeling, but there is a different energy and excitement when the song comes alive in a room full of people! We captured all that fire on this new LIVE album, and it is a full-on heatwave! You’re about to dance, cry, laugh, and worship all at the same time so be prepared. The people in the car next to you are going to be really confused!!…’

Citizen of Heaven Live is an album for any Tauren Wells fan, or any fan of CCM that has heard a lot of these songs on this album over the years on radio. Tauren’s music has been circulating for quite some time on the radio, and even if you’re not really a fan of Tauren’s that much, this album I’m sure will still have some familiarity. Songs like ‘Hills & Valleys’ (his most famous solo single), ‘Echo’ (a collaboration with Elevation Worship), ‘All My Hope’ (a collaboration with Crowder), ‘Famous For’ (originally a song back in the day by The Rubyz ex-singer Alexis Slifer, now reworked by Tauren and featuring artists Jenn Johnson and Christine D’Clario), ‘Known’ (one of the most vulnerable and intimate songs Tauren has done), ‘Until Grace’ (a collaboration with Rascal Flatts’ frontman Gary LeVox) and of course the title track, are all present here on Citizen of Heaven Live, and all these songs remind us all that such an album like this, while still removed from the live event, can still nevertheless ignite emotions of joy and hope, that may otherwise not’ve been as dynamic had it not been for Tauren’s album. Citizen of Heaven Live is an album full of enthusiasm and joy, and is certain to be much appreciated if you love both Tauren’s albums Citizen of Heaven and Hills and Valleys– with a lot of the songs in this live format, coming from his studio albums, there’s nothing much more to say about this album release, except read the reviews here from this site about Citizen Of Heaven and Hills and Valleys here and here respectively. And with that, this album is in fact, dynamic and emotive, powerful, and unique.

The album, and then by extension, Tauren’s music, continue to remind us of God’s goodness in trials, and that our citizenship of heaven is just waiting to be claimed by Christians around the world, myself included. The album is a reminder of our own inadequacies and our constant need for grace…and that’s ok. Tauren has done a great job here, and that even though we may never know why or how the band Royal Tailor broke up, that doesn’t mean that the members (or in this case, the lead singer) also disband from music as well. Just like how Peter Furler continued music after his own departure from (and now subsequent return to) the Newsboys, so has Tauren Wells shown us that his time serving the community and ministering to others through music is not done yet. One of my favourite live album’s I’ve heard in the last couple of years; well done Tauren for such a powerful live project and one to listen to if you loved Hills and Valleys and Citizen of Heaven, and want to listen to more of the same in the live format; or if you really miss Royal Tailor and want to see if Tauren’s new album is as stylistically diverse as the band was back in the day.

5 songs to listen to: Until Grace, Famous For, Miracle, When We Pray, Hills & Valleys