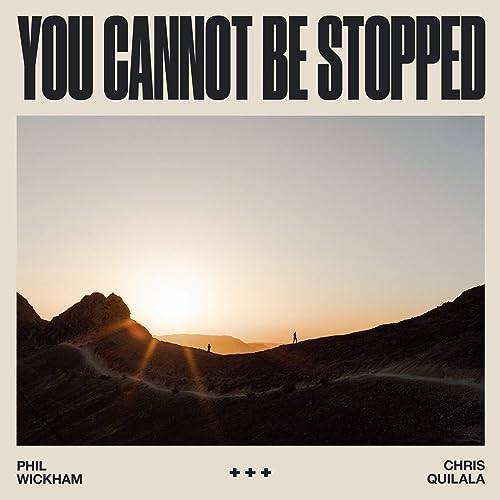 Last year on Good Friday, probably the most worshipful song released. “Living Hope”, co-written with Brian Johnson of Bethel Music, and Phil Wickham; released this time last year- and though you can read my review of the single here– what I concluded was that this vivid account of Jesus’ last days and the subsequent hope that He has give to each of us, was like a breath of fresh air. Normally on Good Friday most of us sing sombre worship songs to reflect the mood of the crucifixion. But “Living Hope”, a celebratory joyous occasion, makes more sense to be sung on the saddest day of the year rather than on the happiest. It’s weird that it’s like that, but maybe once we understand that Good Friday is named as such only because of what we know happens on the Sunday; maybe loudly proclaiming “Living Hope” on Good Friday isn’t weird at all. Now fast forward a year later, and we are no introduced to another Easter themed song. “You Cannot Be Stopped” is sung by… yep, you guessed it! Phil Wickham of course- and this time he’s invited good friend Chris Quilala (of Jesus Culture) to sing with him. Now that I’ve gotten introductions out of the way, let the comparisons with “Living Hope” begin!

Billed as a joint track but also released on Jesus Culture Music, both Phil and Chris sing together in perfect harmony, and create a worship song for the ages. It’s not at the same calibre of “Living Hope” (not yet anyway!) but still comes mighty close. Again sung in a celebratory mood, “You Cannot Be Stopped” recounts the unbelievable and true fact of Jesus rising up from the grave and saving us all from condemnation. With the two worship leaders proclaiming that Jesus is the ‘…mover of mountains, breaker of chains, Jesus has triumphed over the grave, sing hallelujah, the battle is won, nothing can stand against our God…’, we are met with one of the most inspiring worship songs I’ve heard all year, and a track that needs to be heard and experienced right now! Quickly, pronto, that’s how good it is!

Is this song a single for a future Jesus Culture album or a future Chris Quilala album or a future Phil Wickham album? Or maybe none of the above? I reckon it doesn’t really matter and we shouldn’t be worried about songs and singles leading to potential albums and the length of time an artist takes to record albums. That kind of scrutiny does an artist no good when they’re trying to create at their own pace… so let’s just sit and worship Jesus and marvel at this song that has the potential to be big in churches, and then that’s all! Sing “You Cannot Be Stopped” out loud everywhere! Today we can do so because He has risen! And every day afterwards because Jesus is still risen! The perfect anthem (aside from “Living Hope”!) for the best day ever!