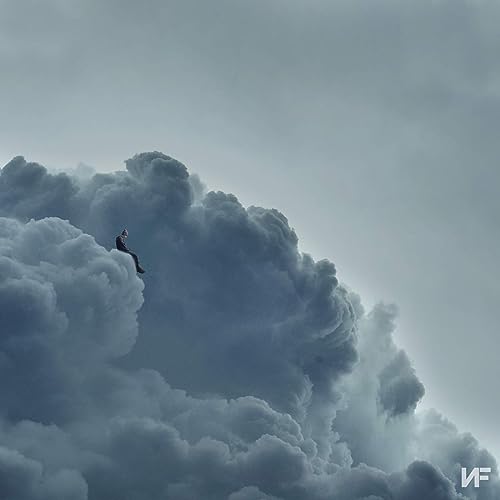 Rap music… hasn’t been my cup of tea, probably all throughout my life I think. When I was younger, I only listened to Carman and Delirious?, with me branching out to other CCM music in 2006, and mainstream music in 2018. But throughout everything that I have reviewed on this site (read them here!) and throughout everything that we’ve blogged about; rap music hasn’t been high on our list to cover. It’s not that Jon and I don’t appreciate such music. We do. I’m constantly in awe of Lecrae and his contemporaries, artists like KB, Andy Mineo, Social Club Misfits and Derek Minor, at how they can spit bars and run lines extremely well, and point people to Jesus at the same time. On the flipside, artists like Eminem, Kanye West, Kendrick Lamar and Jay-Z do nothing for me, and I don’t have an inkling to listen to any type of music that doesn’t draw me closer to Jesus, mainstream rap included. Yet with the release of crossover artist NF’s Clouds, his 1st official mixtape, but essentially his 5th album; I thought that the time was right to voice my thoughts on these 11 tracks. While Jon has blogged about Lecrae, and I about NF (Nate Feuerstein)… there hasn’t been much more coverage of rap over the past few years. Hence I’ve come forth with an open mind into Clouds… and let me tell you that objectively this project is good, but rap in large doses still gives me a headache, and still reaffirms my assertion that this type of music isn’t really my favourite type of music when I need to listen to some inspiration or even for background music.

There’s nothing objectively wrong with rap music. It takes a certain type of skill to be vulnerable and voice your inner most thoughts and say them all out at a quick pace and still be coherent enough for listeners to understand everything that’s being said and conveyed. But for me, listening to a rap album means I need to concentrate, and to be frank, when we are all busy and fill our day up with lots and lots and lots of things, listening to and reviewing a rap album isn’t a priority. Actually making it through listening to Clouds, to be honest, took a very long time, given that this album isn’t in my preferred genre of what I would normally listen to, and what I would consider to be a safe option. However, as this year is the year that I’ve felt that I have grown the most with regard to music and what I listen to; let me say that there are still some tracks on Clouds that are compelling and inspiring. Album opener and the title track (and the second single!) kicks things off with an intense and compelling monologue which essentially recounts Nate’s reasons for releasing a mixtape, and why he isn’t fazed with success nor people’s opinions of him. It’s a hard-hitting track, and a favourite of mine on the album, as Nate passionately recounts that every time he’s successful, people still criticise him, but ‘…I always advance, say how I feel, you know where I stand, raisin’ the bar, I gotta expand, top of the charts, I’m settin’ up camp, pound in my stakes, I put up my tent, shoot for the stars, they fall in my hand, stick to my guns, I don’t even flinch, can push all you want, ain’t movin’ an inch, I rarely miss, you know I’m relentless, ain’t got a choice, no way to prevent it, just who I am, and I don’t regret it, see what I want and then I go get it, followed my gut, I’m happy I did it, beat all the odds, I ain’t got no limits, cannot be stopped, you payin’ attention?…’.

The rest of the ‘album’ offers up to us explosive and meaningful ‘songs’; and even though this album took a while for me to listen to and to review, I don’t regret taking the plunge and being challenged by something I wouldn’t normally listen to. “That’s A Joke” is a hard hitting commentary of sorts, and as Nate reminds the haters that he is a skilful rapper, he also lets us know in this track that he’s always been considered less than other established rappers like Eminem and Kanye… simply because he’s not that edgy nor present much on social media and interviews. But quality speaks for itself, and “That’s A Joke” speaks volumes about the brilliance of NF. “Just Like You”, a rare slower tempoed piano led ballad of sorts, is a standout on Clouds, as Nate earnest and fervently encourages us all that we don’t have to walk our lives alone, and that if we’re hurting in whatever way, we can call on God, our friends and family to help us and stand right beside us, that ‘…just in case my car goes off the highway, or the plane that I get on decides that it’s my last day, I want you to know when you’re alone and you feel afraid, you’re not the only person in the world that isn’t okay, there’s millions of us just like you…’; while “Story” is a cinematic masterpiece, and tells a story that is intense and profound and emotional. It’s the type of track that elevates Nate’s music to an 11, and there’s nothing much I need to say about this track, than… watch the music video and be amazed!

“Prideful”, a heartbreaking and emotional track, is a diss to Nate’s ex or maybe even a friend he used to know, as he describes them becoming extremely jealous because of his success; while the hard-hitting and eloquently rapped “Lost”- the project’s third single, features Hopsin, and is the spiritual sequel to “The Search” (evident in the music video with the black balloons!), as the duo speak about the feelings we get sometimes when we feel alone, and then promptly encourage us that we’re all in this journey of life together, that ‘…failing’s how you grow and learn your lessons, kids, take the worst and try to make the best of it, ’cause when you fail, just know that it’s a test and if you can learn to pick yourself back up again, and train your brain to not be such a pessimist, it’s okay to make mistakes…’. “Layers”, an impressive freestyle rap, has Nate relaying to us all that he’s a complicated person and he has layers, and by extension so do everyone else; whereas the track “Drifting” has NF contemplating his self-worth, and relays that he’s drifting and wandering aimless in life.

However “Drifting” also provides us hope that our worth isn’t in ourselves nor in other people, but in God, as Nate prays to God and asks Him to ‘…give me the faith to rise and help me diversify to take a step forward, immersed in my belligerence, amplified, the feelings and words collide, intensified by living a life deprived, I’d rather be burned alive than go back to thinkin’ I’m insignificant (Insignificant), every impotent moment debated can trigger it, God is my witness definitive, holdin’ my head up, there isn’t an innocent bone in my body, but that’s what gives me the energy lacked to renovate…’. “Trust”, a track where both Nate and guest rapper Tech N9ne spit bars and an incredibly fast speed (probably the fastest I’ve heard Nate rap!), delves into the concept of trust and how Nate hardly trusts anyone, because everyone around him always want something from him and are not genuine. While Clouds ends with the first single “Paid My Dues” (apart from a radio edit of “Clouds”!). This is the first song that has peaked at #1 on the US iTunes charts (yes this song even beat “Let You Down” and “The Search”!), and delves into the heart of the album- critics writing ‘trash’ about him for no apparent reason. And as Nate countlessly defends himself in this song, and relays that he pays his dues and that he’s hustling and working hard, and that reviewers get paid for writing critical reviews that don’t offer up any constructive criticism; this song to end the album is a dig at the critics of the music industry in general. How about we as lovers of music appreciate music for what it is- different genres that speak different to different people? If it doesn’t resonate with us… so what? Maybe it will for someone else!

And with that, I’ll leave this review of sorts by saying- it’s true that I do appreciate NF for what a talented rapper he is. But let me say that I’m not a fanatical fan of his like other listeners… and that’s ok. I still don’t think I can sit through an album of full on rap (I think it took me over 2 hours to write this review and listen to these tracks!), and that’s ok. Clouds is a compelling and moving album- but I wouldn’t listen to it in one sitting again. And that’s ok. Can’t we appreciate something as great art without fully resonating with it? So let me spin some Phil Wickham now, get back into my preferred genre… So NF, what about a Christmas album?