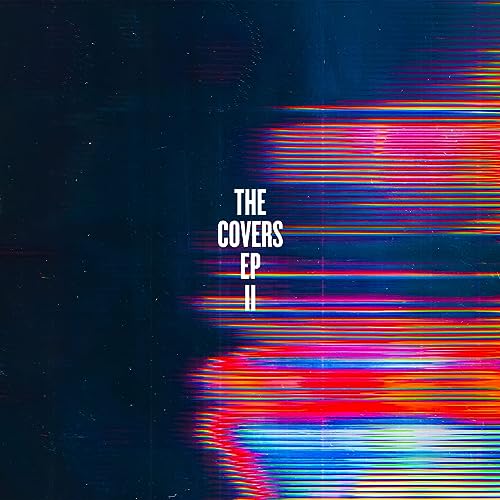 It’s been long been debated since the dawn of music; I reckon. CCM (and even extending to the whole realm of Christian music) v mainstream music. And that is the conundreum if you will. Because as Christians, this question still remains- are we to listen to ‘mainstream’ music, and music that isn’t explicitly about Jesus and the Gospel? Is all ‘mainstream’ music inherently ‘evil’, or is some music even redeemable for the gospel itself? These are questions that have been debated for years upon years, and I don’t necessarily need to say my own two cents, but I will say this- I’ve enjoyed my fair share of mainstream music over the years, and it’s not as ‘evil’ as I was even led to believe myself. And so, as I realised that this EP full of covers of mainstream songs by people within the CCM community released not too long ago, I was intrigued. With virtually no promotion (and still none), we see 7 songs of varying degrees of success be presented in this EP package- and a reminder that songs, be it mainstream or CCM, can still impact and encourage, regardless of who is singing. While this EP has virtually flown under the radar since it’s release, I am of firm belief that some of these covers are some of the most expertly covered songs I’ve heard, in some cases, maybe even better than the originals. But who am I to judge, I’m just a reviewer, right? This EP is a must-have for anyone who loves mainstream, CCM or both, and wants to see something unique and different, something that is as compelling as it is fun filled.

‘…never before has there been a project like this. Sure, there’s been albums by individual artists within the Christian industry where one or two songs on such album are covers of famous mainstream tracks. But to release a full length album of sorts (8 tracks) where every track, except for ‘Holy Spirit’, is in fact a ‘mainstream’ track is a feat in and of itself. There seems to be a stigma surrounding the notion and perception of Christians who sing and perform music that was originally focused towards the mainstream industry. There’s the people that downright oppose that there are some Christians who sing mainstream music, and claim that Satan has come to twist and reshape, that what these artists are doing is in fact immoral. Then there’s others, like myself, who are of a different viewpoint- that whatever music we sing and we hear, God can use anything to bring people closer to Himself, and if someone is impacted by a mainstream song such as any from the track list to this compilation, then so be it. Still, regardless of what view you all hold of mainstream music in general, we cannot deny the fact that these renditions of some of today’s most popular songs are in fact, near-flawless, often at times catchier and musically more balanced and refined than the original…’ This above quote is from the first paragraph of my Re-Covered EP review- where the artsits Carrolton, Grayson Reed and Jordan Feliz, delivered some exquisite covers of songs like ‘Hollow’ (Tori Kelly), ‘Brand New’ (Ben Rector), ‘I Lived’ (OneRepublic) and ‘If I Ain’t Got You’ (Alicia Keys), and what I wrote about the songs on that album, I still stand by them when discussing these 7 tracks. Track #1 of The Covers EP (II) starts off with ‘Everday’ by an indie rock band called Ruth. Now I don’t know who Ruth is, but I do know a band that sounds like Reliant K if ever anyone sounded like one, and Ruth does…a lot. This song was a cover of an original by Buddy Holly, and while I have no idea who that artist is, the song does feel like something I had heard before. Regardless, ‘Everyday’, a song from the 1950s/60s, is redone pop-punk- and with a unique result as well. Standing at only  1:32; this song ends as quickly as it begins (something that wasn’t uncommon back then)…and yet this song still feels complete. While this style of song wouldn’t necessarily be my go-to song or even my song style, I still have come to appreciate music as it was back then, and Ruth’s cover of a song that is as timeless as ‘Everyday’ is something different and unique.

‘Bridge Over Troubled Water’ comes next, and I guess, everyone knows this song, so I don’t really need to say much about it. Quite possibly one of the most famous songs from the discography of Simon and Garfunkel, new artist Stephen Stanley does a great job with this cover, evoking great emotion as he prayerfully sings that he will be there for his friends, if ever they need him near. ‘Love is All Around’ the song is one that I first heard in the 2003 movie Love Actually, and that’s the only place where I heard it for a long time. Bill Nighy sung it in the movie, and I’ve since heard the original track by Wet, Wet, Wet not that long ago. Northern Irish band Rend Collective have made this song theirs, and if you didn’t know Wet, Wet, Wet or even that song, you may not have guessed that this song was a cover- that’s how cleverly disguised this song is- Chris Llewellyn declares this song so fervently and passionately, that we see this song take on a whole new level- and yes, the cover is better than the original, by a mile. A EDM original of ‘In the Name of Love’ (featuring Bebe Rexha and Dutch DJ Martin Garrix) is given the acoustical treatment, with light acoustic guitar and looping keyboards, as worship artist Kari Jobe gives her interpretation of this quasi-spiritual song. I’ve always felt that ‘In the Name of Love’ has a lot of religious connotations, and here with Kari declaring the words, I can imagine God using this song as a way of speaking truth over us, asking us if we’d take risks and follow into the unknown wherever He leads, in the name of love. ‘Signed Sealed Delivered’ is a song that I may have heard only once (or twice), and while I don’t know Evvie and her music, I am familiar with Stevie Wonder and his trademark saxophone undertone in a lot of his music. So for this rendition to closely follow the instruemtation of the original, is something interesting. This song may not compare to the original soulful Stevie Wonder track, but Evvie’s passion comes pretty close.

The album then rounds out with the songs ‘Have a Little Faith in Me’ and ‘Unwritten’, quite possibly the two most impressive covers in this set of 7- ‘Have a Little Faith in Me’ is covered by one of CCM’s most promising stars, Riley Clemmons, and ‘Unwritten’, by another promising CCM act, the young escape. ‘Have a Little Faith in Me’ is a song that I’m sure a lot of people know, if you don’t know, then I guess check out google and then come back to this review. Now that you all have found yourself familiar with this track, lemme just say that this rendition is arguably by far one of my favourites (as well as Mandy Moore’s as well). Riley just has a passion and an unbridled fervent honesty that isn’t necessarily shown that much in CCM, and it is delivered here passionately in this track. ‘Unwritten’ is therefore the remaining track on this album, covered expertly as we get lost in the track, and forget that it was originally Natasha Bedingfield’s, and not the young escape’s. ‘Unwritten’ is a classic song of the 2000s, and to see it being covered by quite possibly one of the most underrated new bands in recent years, ‘Unwritten’ is the song to listen to, if ever there is one song to check out!

So what can I say about this covers EP that I haven’t already? That this EP is one where we can hear and be inspired, even though most of the songs weren’t really written with a ‘faith’ outlook in mind? This EP is one that’ll hopefully encourage us all to branch out of the Christian music that I myself, as with everyone else, often listen to on a regular basis, as this EP reminds myself that there is still mainstream music out there that is encouraging and impacting, as much as the current Christian radio hits on K-Love and Air1 currently. Songs like “Unwritten”, “Bridge Over Troubled Water” and “In the Name of Love” are just some of the songs that are standouts on the EP, and songs that’ll continue to be in my Spotify playlists in the near future. Should another Christian label, say, Provident Label Group, get in on the act at a later date and release their own EP/album full of mainstream covers? Maybe, maybe not, but what I do know is this- this stigma around mainstream and CCM and the blurry lines between them unfortunately has been going on longer than it should be. Music, mainstream or CCM, can be used by God to bring people closer to each other and closer to Him, and if it takes a song like ‘Unwritten’ for someone to act differently with their lives, then who am I to judge God’s methods? This is a great EP if you love CCM, mainstream or maybe both…or maybe, this is just a good EP, period. With timeless tracks like ‘Have A Little Faith in Me’, ‘Love is All Around’ and ‘Signed Sealed Delivered’ sung in a different light, we are reminded that songs of all time periods have their place, and that classic tracks can be redone to bring about a certain uniqueness and magic that’ll draw a younger generation into music like this. Maybe a Covers EP (III) in the future? And do we even know if there was a Covers EP (I)? Whatever the case, this further proves the point, that mainstream music is ok- my blog post series over the last few years is evidence of this!

3 songs to listen to: Unwritten, Have a Little Faith in Me, Love is All Around