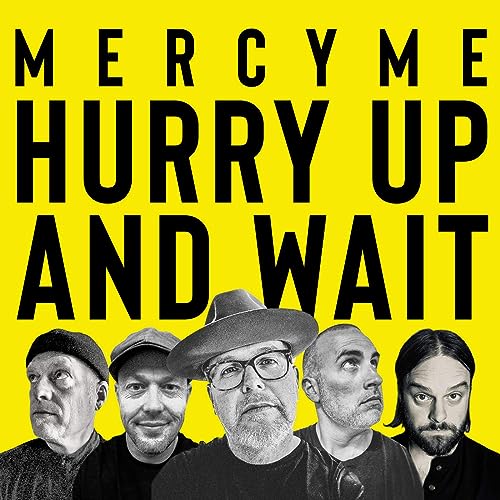 “…that’s the beauty of the next chapter. It’s unwritten. It’s whatever the band want it to be, and whatever God wants it to be. If the band split up, then so be it, because it’s probably in God’s timing. But I think…that if MercyMe release another album in the future, whenever that is, that they should treat it as another ‘debut’ album. That’s the way to go- reinvent their sound; and see where God takes them. It may be to another untapped market to go out and spread the gospel. Until then…you can recommend [I Can Only Imagine – The Very Best of MercyMe (Deluxe)] to all of your friends, family, your enemies, your pets, even the neighbours dog. That’s how important I reckon this album will be. And timeless, and relevant and revolutionary. Oh, and go watch the film in a month’s time. I guarantee it will be worth it! Well done guys for doing what probably no other CCM band or artist has done before, and that’s release a greatest hits album, that actually is a greatest hits album!…”

Having emphatically declared with certainty the above quote in my review for MercyMe latest greatest hits album which released in 2018 (the same year as their movie I Can Only Imagine– a drama about lead singer Bart Millard’s life and how he forgave his father for beating and physically abusing him!); I used to think that these guys may have reached their peak. Welcome To The New and Lifer were two of the band’s best albums yet, and with the discography that they have had, as well as the movie that released inspired by lead singer Bart Millard’s life; I along with everyone else assumed that they were winding down. Not that there’s anything wrong with retiring from the music business, but generally it is common practice for musicians to keep going and going and going…until they die. But thankfully the day that MercyMe retire is not yet. Because here we are, in 2020; with a never-before-heard brand-new song “Hurry Up And Wait”- the follow-up to the smash hit single “Almost Home”- also present in another movie- this time I Still Believe about CCM singer Jeremy Camp. “Hurry Up And Wait” debuted on a facebook livestream and with the music video and lyric video having debuted as well- I reckon such a song like this having dropped while we are all in the middle of quarantining at home due to COVID-19… this is a very unique track indeed. Albums and music release dates are now in flux due to the pandemic sweeping the globe right now- and quite a lot of artists are pressing pause and pushing their release back to the end of the year or next year, timing them with concert tours when these are readily able to happen. But other artists- like MercyMe– are forging ahead, acknowledging that yes, we are in crazy times right now, but also that we all need new music now more than ever, to encourage, to uplift, to inspire, and to remind us that we are not alone in the universe. Catchy to its core, the message is simple while we all are uncertain. And that’s to hurry up. And to wait.

The music video for this song is actually very ingenious. Bart’s alone in his house (maybe his wife and kids are at the shopping centre?) and he’s bored. He’s at a lose end. Then he gets an idea to completely overhaul his living space into a band practice area- complete with video projections of his band mates from remote parts of the country. A fun-filled and jovial melody, and a happy-go-lucky tune by nature, it seems like people right now are hurrying up trying to end this quarantine by any means necessary, or are just waiting in fear at home, not really living; but MercyMe encourage us to do both. Yes to hurrying up in the sense of keeping busy at home, but also waiting on Jesus, realising that the things that He accomplishes are in His timing, and not ours. I used to think that “Almost Home” would be the band’s crowning achievement of late, in terms of possibly the most impacting hit from their yet to be released new album The Spaceman. Now I know that that is not the case. Because “Hurry Up And Wait” gives new meaning to how we live each day, and new meaning to the Bible verse Isaiah 40:31.

MercyMe are one of my favourite bands period. Their passion for Jesus and their infectious joy no doubt part of a package that I’m glad exists- the world is all the better for Bart, Robbie, Nathan, Mike and Barry to be playing music together. While we don’t know what the future holds yet (and I mean that in the literal sense!), let me tell you that it will be a ride, that’s for sure. “Hurry Up And Wait” is the perfect continuation to “Almost Home” and their new chapter of MercyMe, and hopefully their new album whenever it arises, will be a treat to listen to. Until then everyone, let us remember to hurry up and be active at home, and also to wait on the Lord. Well done MercyMe, I can’t wait to hear what God has in store for each of you!