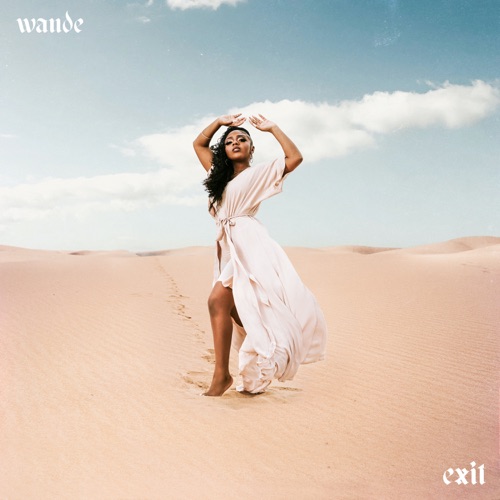 Let me be honest with you here. Rap isn’t my forte, nor my first preference in terms of my favourite genre of listening to music. Yep, seriously. If you were to ask me of my music preference, you’d find me saying ‘CCM, or pop, or worship, or more recently country’. Although objectively I admire guys and girls who bust rhymes and beats to create skillful works of art and thoughtful pieces of reflective introspection, I personally wouldn’t actively seek out an artist of rap to listen to from start to finish, just for fun. I’d be cool with listening to a few songs here and there- and this is how I have approached artists like Lecrae, NF, KB, Derek Minor, Trip Lee, Tedashii, PEABOD and others; however a full album of rap probably isn’t my cup of tea. Yet for new up and coming latest signee to Reach Records Wande’s debut project EXIT, I thought to myself ‘why not? It’s her first album, how bad could it be?’. The result is 10 inspiring, highly energetic and thought-provoking tunes, that have me bopping my head from start to finish. This release doesn’t have me fully sold on rap music, however Wande’s album does a brilliant job at keeping me interested and quietly confident for rap’s future- and that is a good thing indeed.

Driven by the piano and heavy electronics, “Be Yourself” is as encouraging as rap songs come, as Wande passionately reiterates that in order to lived life as God intended, we should try to live our lives as the people we are- and not wish that we are someone else. Even though sometimes we wish and hope that we are living someone else’s life, “Be Yourself” reassures us that God indeed has a purpose for each one of us, thus we needn’t worry about not living up to our potential. The sheer intensity is ratcheted up a notch, as Wande is joined by nobigdyl and WHATUPRG on “Been Up”, another inspirational and testimony like track- the trio each relaying to us how God has inspired and blessed them in their lives, hence the reason for them ‘being up’; while Wande brings the joy and positivity with her debut single “HAPPY”, powerfully exclaiming that she longs to be happy and wants God to fill her with His presence so that His joy can flow through her to everyone she meets.

The rest of the album serves as sort of an extended introduction into who Wande is as a person and as a believer in Christ. “WAKANDE” is a tribute to Wande’s heritage in Africa, and features Wande singing in Yoruba- her native language from Nigeria, as she vibrantly and fervently relays to us that her upbringing in Africa had a great influence on who she is as a person; while the musically experimental “ICONIC” dives further into her life and highlights the ever true notion of God being in control of Wande’s life since the very beginning. The 2 minute high-octane and musically intense duet with Taylor Hill called “Nice Things” is next, as the two singers present to us the confronting yet comforting realisation that ‘nice’ or materialistic tangible things aren’t enough for us to feel happy and satisfied- only Jesus’ love is enough for us; while Wande joins forces with Steve Rizo to deliver what is closest to a worship anthem as can be, as both vocalists emphatically praise Jesus and declare that all we want to do is to find a million ways to praise His name.

The subdued, contemplative guitar led ballad “More To Me” is a slower tempo lullaby-ish type track that ardently details how much Jesus cares for her and how much He means to her, that ‘…through the fright, [You] hold me tight, I need Yahweh, ayy, through the night, I need light, show me Your way, I need life all the time, yeah, that’s always…’; while the penultimate track “No Further” is Wande’s most personal track, and “…It’s one of my personal favorites in terms of talking about my life. The song speaks about how God truly sees us who we are under all the layers. We don’t have to pretend with Him. God’s seen all we’ve been through and experienced including all of our pain. All he wants us to do is look no further and lean on him. To trust Him and not rely solely on our own abilities…”. Exit then ends with the next radio single called “Be The Light”, featuring Evan and Eris. This track is also one of Wande’s favourites, as she reminds us that “…the track portrays one of my main missions in life; to be the light of the world. The concept behind the song feeds into the entire theme for the album–to live out the life God calls us to lead. One with Him and for Him. The track immediately points you back to God and feeds into the main mission for Christians–to be a light to the world and to reflect God while sharing His love with all…”. And for me, “Be The Light” is also a personal standout, as Evan and Eris beautifully harmonise with Wande, and remind us of the hope and certainty that we have in Jesus, and the mission that we are called to- to show God’s love to everywhere we go.

As far as rap albums, Wande’s effort isn’t as flash as other rap artists, nor does she rap with the same intensity as artists like Lecrae or NF. Yet her passion and heart for Jesus cannot be denied, as Exit proves to be a stirring and poignant debut. One of the most underrated artists of this year thus far, I reckon you won’t go wrong with checking out Wande’s original material- you’ll definitely be surprised and pleased with what you hear. Well done Wande, may God bless you heaps in your future endeavours!

3 songs to listen to: HAPPY, A Million Ways, Be The Light