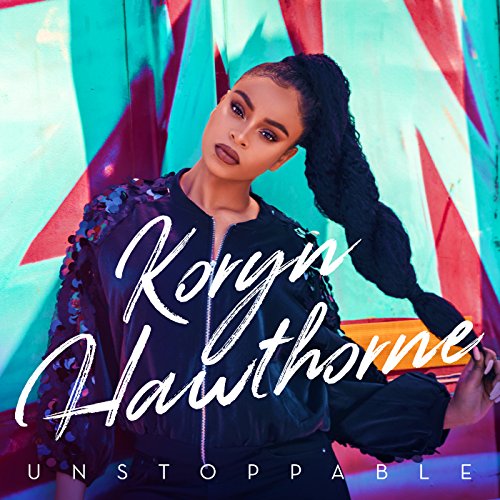 Have you ever heard a debut album that has just take you by surprise (in a good way!) that has you left in wonder and asking the question of ‘where did this person come from?’ (in a good way as well)? Enter in 20-year-old gospel/soul/pop/CCM/worship artist Koryn Hawthorne, formerly a contestant on The Voice. With powerful vocals akin to Nicole C. Mullen, Mandisa, Mary Mary, Tasha Cobbs-Leonard, Kierra Sheard and Tamela Mann; Koryn’s label debut Unstoppable on Provident Label Group, which released in July this year; is nothing short of remarkable, as I am completely blown away- I am sure you all will be too. Despite the ‘shortness’ of all the 10 tracks- clocking in at 37 minutes- as well as 4 songs being double-ups from her 2017 EP; there’s still no denying how on fire Koryn is for Jesus, which shows definitely in these energetic and passionate worship anthems. A must listen if you’re a fan of gospel music, worship music, or even just music in general; Koryn will touch your soul, and you’ll definitely never be the same again.

Frenetic guitar led rock anthem “Warriors” kicks starts of proceedings, and is as powerful an opener as I have heard in a long time. With Koryn declaring powerfully that as believers we are warriors because of Jesus in our lives, and that nothing others can say or do should bring us down because of who is with us in our corner; the hopeful inspirational tune can also double up as a positive mainstream inspirational song as well, given that Jesus’ name isn’t explicitly stated at all throughout the track. That’s not necessarily a bad thing, and we are blessed to hear Koryn actively reminding us even in this heartfelt melody, that we can rise above adversity. Without stating how we actually rise above adversity may leave listeners a bit wanting, especially if they are believers like myself; however ambiguity on this track means that the song can reach a lot of people from a lot of different world view backgrounds, which is indeed a plus in my book.

But if you prefer Koryn explicitly praising Jesus, then you are in luck, as other songs on the album are more overt in singing His praises. The groovy EDM infused title track unashamedly declares that we are unstoppable ‘…cause I can be what I want, try it if I want, powered by the King and He won’t let me fall, cause I’m unstoppable, nah, nah, He won’t let me fall…’, and is a high paced track fit for dancing too, as Koryn majestically reiterates (through song and gospel infused-rap!) that adversity means nothing to her with Jesus on her side; while hard-hitting piano prominent confronting yet also comforting “Stay Away” highlights Koryn’s relationship with a toxic person, ultimately concluding that we all should stay away from those kind of people as ‘…any love that ain’t from above, that ain’t from above…’. Debut single and album highlight “Won’t He Do It” is remixed here and is a different version from Koryn’s 2017 EP, and sounds like a song that could’ve been featured on movies like Sister Act 1 and 2 if it was written during the 90’s when the films were made- though “Won’t He Do It” was indeed recorded initially for the OWN TV shows Greenleaf; as Koryn ardently and passionately relays to us that God can do everything that we ask for, and in time we’re going to look back at our hard times and be amazed and grateful at Jesus’ faithfulness and providence in our lives.

While “Bless Up”, a laid-back jazz inspired relationship style song, has Koryn captivating us with her explosive vocals, and has her mentioning that she will always stay true to her future spouse; we all need to know that this track is only a fraction of the way God feels about us. He is the One who will always keep pursuing us even when we outright deny Him- so for God to go to the lengths He does just so we can have the option to choose Him, is true love right there. Gospel infused 2 minute tune “For The Truth” is led by keys and has a jazz and a gospel undertone at the same time, where Koryn prayerfully highlights to us that she is running, from the devil and towards Jesus in pursuit of the Truth that is His presence; while the toe-tapping rap/gospel infused “Reasons” is simple lyrically, yet nonetheless poignant and honest with Koryn relaying to us that she has a reason to dance, to smile, to praise, to live; and that reason is Jesus.

The album ends with the declaratory and high-octane “Down Goes Rome”, which is a song that is so high-concept and multi-faceted in my opinion, that it could actually succeed on mainstream radio or in theatre productions or in movie soundtracks- Rome in this case is a metaphor for the temptations and seductions of this world, and Koryn here inspires us all in her eloquently delivery of such a multi-layered melody, as she declares to us that she longs for ‘Rome’ aka our old sinful lives, to fall. Of course, Rome could mean any variety of things if you ask different people, and that is what makes this song so special. Like the album opener “Warriors”, Koryn once again includes a track that doesn’t allude to Jesus at all- and I’m positive that if the world gets hooked on songs like the opener and the closer, then I’m sure that little by little, Jesus will invade the earth and souls will be won for the Kingdom.

Yet it is the pair of worship numbers “You Still Love Me” and “Speak The Name” that are THE songs to listen to in my opinion, if you were to listen to just two. There’s nothing that I can say about these tracks without going into a lengthy essay or a thesis as to why these melodies are perhaps a couple of my favourites of the year (or even the past few years!); and with this review this long already, I reckon you should listen to both the tracks (on iTunes or Spotify or Youtube, or whatever platform you prefer!) and then be amazed. With “You Still Love Me” being a slower tempo piano led worship anthem pointing out that Jesus still loves us despite everything we have done and despite the numerous times we have rejected Him; “Speak The Name” features Natalie Grant on guest vocals, and both artists sing perfectly in harmony, crying out fervently that ‘…Your Name is healing, Your Name is power, Your Name is holy, my strong, strong tower, wonderful Name, glorious Name, powerful Name of Jesus, Jesus…’.

Koryn Hawthorne’s debut project Unstoppable is, in a word… well, unstoppable I guess. A surprise left-field favourite album of mine, Koryn already has been nominated for two Stellar Awards this year (New Artist and Female Vocalist), and has also been nominated for a Dove Award (New Artist) for this year also. And from her album, I reckon sky’s the limit here, as it’s literally a near-flawless album, and one that will be on my rotation on iTunes for a long, long time. I’m usually not a fan of straight up gospel, but Koryn has won me over. Well done Koryn, I am definitely eagerly anticipating what God has in store next! Every other listener out there- what are you waiting for? Spend the next 37 minutes immersed in all things Koryn, and then we can compare notes on how awesome the album is, shall we?

3 songs to listen to: Won’t He Do It, You Still Love Me, Speak The Name