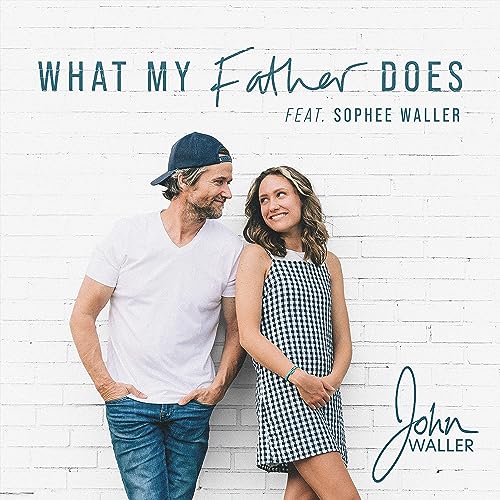 John Waller has had his time in the spotlight. In some ways far more than an average CCM artist. Being touted way back in the day as following in the footsteps of Casting Crowns (who was the artist/band that discovered John and had a hand in the unveiling of John’s label debut, The Blessing), John has been since known for his chart-topping songs like ‘Crazy Faith’ (featured in the powerful movie War Room), ‘While I’m Waiting’ (from the Kirk Cameron movie Fireproof), ‘As For Me And My House’, ‘Still Calls Me Son’, and many, many more. And while John departed Reunion Records mid-way through his career, his message still stayed the same- Christ focused, as we’re reminded to live with abandon, putting into practice the faith we have as a result of what Christ has undertaken on our behalf. John’s passion for the church and delivering songs that can bring listeners hope and a closeness with God has been evident in his music- and together with songs like the ones aforementioned above, comes a heart John has for adoption and taking care of children who don’t have a home for themselves. John has been able to minister to others for years, and his most recent full-length studio album, Explosions of Light, that was released in 2019, was one of my favourite albums of that particular year, with standout songs consisting of tracks like ‘Awakening’, ‘Epic’, ‘Comeback’ and ‘When God Says No’. Now here we are in 2021, and John is at it again, this time, a follow-up to his anticipated ‘comeback’ single ‘But God’- a duet with his sixteen y.o. daughter Sophee, ‘What My Father Does’.

John’s comeback song ‘But God’ was inspired inspired by the Scriptures of 1 Corinthians 1:27 (But God chose the foolish things of the world to shame the wise; God chose the weak things of the world to shame the strong.), and is a song written for a time, space and place of now, where people can cling onto the hope that God still is working, even if and when we can’t see it. ‘What My Father Does’, a duet with his daughter, follows on from ‘But God’, and delves deeper into the theme of expecting the unexpected with our Heavenly Father, to understand that what our Father does, may not always make sense to us at the time, and that’s ok. The song and corresponding music video debuted on both Parade and American Songwriter, and on the weekend leading up to Father’s Day (in America), this song, to be featured on John Waller’s upcoming album A Family Thing, to be unveiled in fall (as per the Northern Hemisphere) 2021, is a great reminder of God’s unending love for His creation. As John himself divulges, ‘…my sins don’t dismiss it, and my achievements don’t warrant it. I see that more clearly today than ever, and the freedom in that is overwhelming. It’s how I love my children and it’s how God loves His. It’s what my Father does…’ With practically radio silence between the release of Explosions of Light and now, John himself initially thought that he wasn’t going to make music ever again. And then he did- he had his ‘but God’ moment (which led to ‘But God’ being created), where God knew that He wasn’t finished with John yet. ‘But God’ challenges us all to continue to place our trust in God, always being reminded that regardless of the situation, He is still working, even if it’s not in the ways that we perceive Him to work. ‘What My Father Does’ carries on from that, and allows us to give thanks and praise to the Lord for the things He does, and the work He’s continuing in us as we become much more at peace with the world around us, and much more receptive of what God is doing in our lives, and those around us.

John Waller’s second song release within a couple of years is one of the most pleasant surprises of the year so far. Even though John started off as signed to a label, he is now currently one of my favourite indie artists, alongside others like Kerrie Roberts. With heartfelt lyrics and a vertical praise atmosphere to bring about congregational worship, John’s heart for worship, family, adoption, hope and Christ is all evident within not only this song, but throughout his whole career thus far. Well done John for such an inspired and stirring melody, one that’ll hopefully encourage us all to live a life knowing full well that whatever God does is for our good and His glory, and that we ought to give thanks for that, however that may look in our lives at the moment. Well done John for this unique duet, maybe more music opportunities from Sophee Waller in the future?