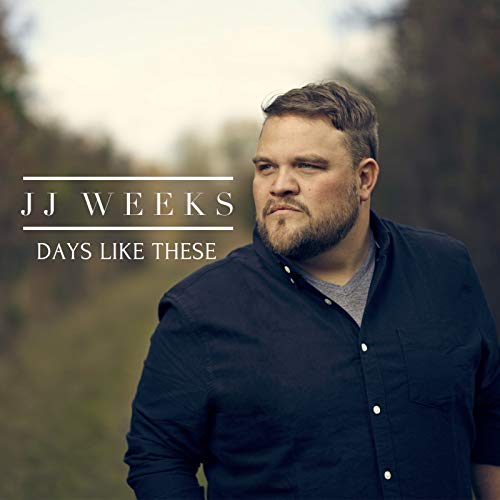 ‘…A track that hasn’t quite grabbed me yet, JJ Weeks Band are probably releasing a new album later on in 2018, so while you all are keeping an eye out for that, then I guess “Fool’s Gold” is the track for you to jam to, and ponder over as you wait. A must for buying digitally or physically for people who want to be encouraged and uplifted, and who lover jazz/soul/pop/gospel infusion; JJ Weeks Band’s “Fool’s Gold” is sure to to provide buzz and coverage for the band. Well done JJ Weeks Band– I am definitely anticipating your third album in the future! …’ The quote above refers to the review of ‘Fools Gold’ that we wrote earlier on during the year, and how we thought that such a song that was released was going to be part of a new JJ Weeks Band album that is coming…alas, here we are in November, and JJ Weeks (yes, JJ Weeks, not JJ Weeks Band) released a new song, titled ‘Days Like These’. There’s even a behind the scenes video, along with the song itself which is just a piano only track and his powerful vocals. And so what is becoming of the elusive JJ Weeks Band album in the future? Is JJ Weeks Band still operational or is it just JJ Weeks just by himself? I don’t really know, but what I do know is this- this song ‘Days Like These’ is perhaps one of the most vulnerable songs I’ve heard this year. Ever. And while I know that bands come and go, and considering that the last time JJ and his band released a full length record was in 2016 with As Long as We Can Breathe and here we are in November 2018, it’s not looking any more promising; what I do know that even if band’s split up and still go their separate ways, God will still have His hand in everything, and that is very much true of JJ and his own story that God is writing. ‘Days Like These’ is unexpected, and maybe, that is just what we need for us to understand that on days like these, God is there, working everything for our good and His glory.

A long time between releases (‘Fools Gold’ released earlier on during the year), JJ Weeks (is JJ Weeks part of a band now or is it just himself?) unveiled ‘Days Like These’ this past Black Friday, and with an emotional behind the scenes video, we see a side of JJ that perhaps was not even unveiled to the camera…until now of course. In the video, JJ explains in a roundabout way his story of feeling like there’s nothing left for him to give, sort of like a depression cycle that he was experiencing over the last few years. And so what was borne out of a season of not knowing whether or not the Lord still wants JJ on the path he has served so faithfully upon, ‘Days Like These’ is not only therapeutic for himself but also for people whom are hearing the song as well. With just the piano and his raspy and equally powerful voice; JJ vulnerably declares that ‘…on days like these, I know that You’re still faithful, on days like these, You’re not finished with me yet, when my heart is weak, and my will is gone, still You remain, steady and strong, and I know that You’re still holding onto me on days like these…’ Whether or not JJ Weeks will re-commence the band or not is, in some way, immaterial, a conversation between JJ and God if you will. What I do know that sometimes things happen only for a season, and ‘Days Like These’ is a song that will certainly transform and impact lives in the upcoming weeks and months ahead. A song that has quietly and silently shot up to become one of my favourites of the last quarter of 2018 thus far, ‘Days Like These’ is a must-listen if you enjoy reflective ballads, or if you just want something inspiring and vulnerable this Christmas holiday season!

So there you have it, JJ Weeks has just dropped quite possibly his most vulnerable song since JJ’s ‘Let Them See You’ (which, ironically, is actually a cover of Colton Dixon’s song of the same name!). And as we enter into this December month full of hope, wonder and awe, but also full of uncertainty, disappointment and upset moments as some people may experience this holiday, let this song be a comfort and a declaration that even on days like these, God is still working for our good. He is right there, and JJ’s testimony of God’s sovereign power in his own life, ought to be a claim for us to run with and take as our own, knowing full well that God can and will use whatever circumstance to bring His children closer and back to Him. Well done JJ for such a powerful song, can’t wait for what the Lord has in store for you in the upcoming months ahead!