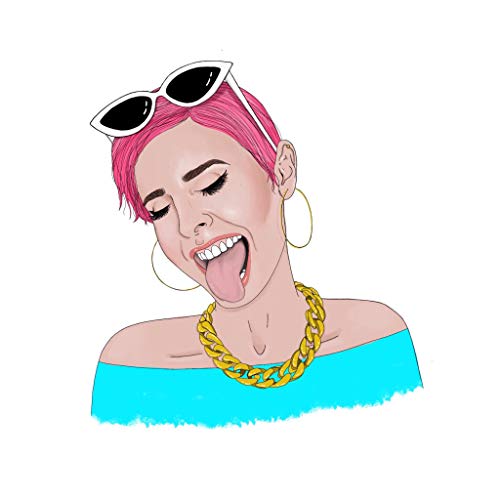 Cimorelli is perhaps one of youtube’s biggest sensations, a group of 6 sisters that are using their platform on the internet to spread hope, positivity, faith, and everything else in between. They are role models, not just to young people and young girls in particular, but I’m sure to anyone who has listened to their music. If by some unknown reason you have frequented our site from time to time and haven’t heard of Cimorelli, I suggest this one thing- go check out all things Cimorelli here (reviews, interviews etc.) and check out what I reckon is one of my all time favourite bands…ever. Now that you’ve done that, let’s move on. A little while back, Lisa Cimorelli decided to upload a side project, starting off with ‘Unloved’ in September 2018. We reviewed the single, and now a couple of months later, we see yet another gifting to us in the form of ‘Goodbye’. While many have speculated as to whether Lisa would just leave the band and go the solo route, we saw from Lisa’s explanation on Instagram that this was not the case- ‘…first off, it’s not a “solo project”. This is a side project that I am very excited to share with you. I am not leaving my sisters or going anywhere. This is for anyone who wants to hear more music from me in addition to what I’m already doing with my band. We are in an excellent place as a group and that’s why I’m finally ready to put this out and enjoy it with my family and all of you. I’m very excited to dive into this with you guys. So now, let us begin…’ So there you have it- Lisa is not leaving the band, yet she’s still releasing vulnerable and heartfelt material that can resonate and impact whomever hears it, while still contributing to Cimorelli as they themselves continue as a band to stretch the boundaries of what good pop music with an inspirational edge can and should sound like. Lisa has long been praised for her own voice, and through both ‘Unloved’ and ‘Goodbye’, Lisa’s vocals are on display. From an objective standpoint, Lisa’s vocals alone ought to be why anyone should listen to the band- they are that good, and while Lisa has said multiple times that she’s not leaving the band, I do often wonder- that if she were to leave, will she still have a similar following? Maybe, maybe not, but what I will say is this- Lisa is extremely talented and it shows, not just through both ‘Goodbye’ or ‘Unloved’, but throughout her whole Cimorelli career as well.

As Lisa herself vulnerably relays her own thoughts of the song via Instagram; ‘…on a more upbeat note than Unloved, #Goodbye is an anthem of honesty, self respect and courage for that moment when you finally decide to move on. It’s a nice mix of vulnerable and strong, exciting and honest. I personally have listened to this song many times when I needed to leave someone or something behind, whenever I get to that point where enough is finally enough and it’s time to be strong. I am SO PROUD OF THIS SONG and I cannot WAIT for you guys to hear it. It is truly a bop among bops if I do say so myself and I am ecstatic to share it with y’all. thank you guys SO MUCH for all the amazing support on the music I’ve been making and releasing, I’m so happy you guys have been liking it. I just have so much to say and so many melodies in my head, it is an honor and a privilege to get to share them with you all and be so connected from my heart straight to yours. I will always be grateful for that…’ ‘Goodbye’, for the most part, is a song about just that- saying goodbye, either to someone or a bad habit we have been holding onto for years, because, well, it’s a bad habit. A song that is about letting things go that have a stronghold upon us for whatever reason, ‘Goodbye’ is much more upbeat and therefore much more relatable in style to people (because frankly, who really wants to hear a song that is in a reflective mood- we’d rather hear the upbeat song any day!).

The message- being rid of things in our lives that drag us down rather than build us up. While at first glance this song is about a failed relationship that ended on her part, the song holds a deeper meaning, and is just as about an addiction we want to say enough is enough, as it is about boy or girl trouble. We can be and should stand up for ourselves if relationships we are in aren’t benefiting both involved, and if we feel like such relationships are soul-sucking, then something needs to be undertaken. ‘Goodbye’ can hopefully give us confidence and courage to take such measures so that we can walk away from scenarios that are unhealthy for us. A song that will hopefully allow us to cross our fear and undertake things that may hurt in the short term but will succeed as the years go by, this melody, though a pop anthem at its best, is one to reflect upon also as we see if there’s a bit of ourselves in Lisa and the song in general!

‘Pretty Pink’, ‘You’re Worth It’, ‘Good Enough’, ‘Wrong’, ‘The Love of a Man’, ‘Headlights’… what do these songs all have in common? Yes, all written, in part or full, by Lisa Cimorelli. All of these songs aforementioned have been some of my own favourite songs by the band Cimorelli over the last few years. Add ‘Goodbye’ (as well as Lisa’s earlier solo song ‘Unloved’) to that list also. Let’s just say that Lisa herself is a talented singer-songwriter, yet to unveil something as vulnerable and personable as ‘Goodbye’ takes heart, passion and courage. It is in these moments that I understand why I love the band- because of their authenticity and portrayal of real life, no matter how messy it is. For Cimorelli and their commitment to delivering quality music, be it covers or originals, has taught me that there is a wide variety of music out there at my grasp, and ‘mainstream’ music isn’t that ‘bad’ or ‘inferior’ to Christian music. In fact, God can indeed speak through anything, even a song that wasn’t necessarily written with Jesus at the forefront. ‘Goodbye’ and ‘Unloved’ are both songs that have inspired and impacted be of late.

Though ‘Goodbye’ is just Lisa, it doesn’t make the song itself any less emotive or poignant. Lisa has a knack for delivering great vocal moments, and ‘Goodbye’ has tons of them. But the song is much more than vocal moments, or quality of electronics employed in the song. The message of saying goodbye to things and people that have dragged us down, is something we all need to consider moving forward in our own lives. ‘Unloved’ is not just for anyone who loves EDM-pop music. It is for people who love music, full stop. Well done Lisa for such a heart-warming yet equally confronting song in ‘Goodbye’. Here’s to the song impacting lives, as we’re to hopefully say goodbye to a lot of things that weigh us from what we believe God is calling us to overcome and achieve, in the upcoming months and years ahead!