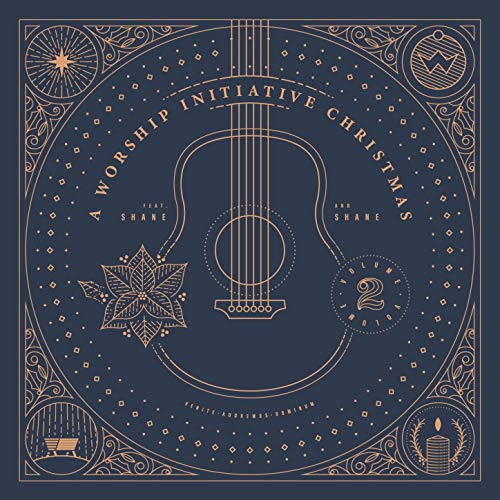 Shane and Shane don’t need any introduction. The duo have been creating music and a name for themselves over the years, yet it was from 2014 onward where the duo started making their mark on the worship music industry- since 2014 onward as they launched the Worship Initiative Website, online toolkit and worship resource program alongside various albums of cover worship songs (songs that are popular in churches around the world) that have released at periodic times throughout the last few years. Often at times Shane and Shane record the worship songs in a much better structure and atmosphere compared to the original recordings…and that is ok. Shane Bernard and Shane Everett; both of whom make up this duo, have been undertaking this ministry for a while now (since 2014) and have since amassed 16 volumes (13 full length albums and 3 EPs) full of worship covers. Let’s just say that every worship song you could think of, they would’ve done a worship cover of it within one of their 15 volumes. And most, if not all of them, are comparable to the original.

Shane & Shane also unveiled yet another series aside from their worshipful covers, titled A Worship Initiative Christmas, their first volume releasing in 2014, and now the second volume, being unveiled just this past week or so. And so, we see this duo boldly declaring hymns and Christmas carols, both on their first Christmas album and now this one, as we’re reminded in this collection of 10 songs that impactful and encouraging melodies need not to just be modern worship songs, but rather, what this Christmas carol album by the Shanes gives a reminder of is this- that songs of yesteryear, songs that are ‘only’ sung when Christmas comes around, can still be and are, very powerful and emotive, maybe even as much or more so than modern worship songs we sing for the other 11 months of the year! Let’s just say that Shane Everett and Shane Barnard have unveiled to us a Christmas album we want to play on repeat again and again and again- sure these renditions aren’t as anthemic and orchestral as songs from Michael W. Smith, or as ingenious as songs from Pentatonix, but the fact of the matter still stands- Christmas carols still have their place in modern day society, and if this album from Shane & Shane gives us a glimpse into such a resonant fact, then the album and its execution has done its job!

Looking through the song list and we see a vast majority of them are covers of Christmas carols we all know- as well as a few hymns thrown in for good measure. ‘Come Thou Long Expected Jesus’ is the lone hymn present on this 10 song tracklist, while songs like ‘Hark The Herald Angels Sing’, ‘O Little Town of Bethlehem’, ‘What Child is This’, ‘Away in a Manger’ and ‘It Came Upon a Midnight Clear’ are all songs that we have sung at one point or another during the Christmas holiday season, and all are present on this Christmas unveiling by the duo. It is also known throughout the duo’s Worship Initiative volumes that both Shane’s love to collaborate, so it is no secret that upon this album release, there’s a bunch of collaborations. Bethany Barnard, formally known as Bethany Dillion (who once was a driving force in the CCM industry), contributes on ‘Breath of Heaven’, originally recorded and written by Amy Grant, and then reimagined by Hannah Kerr on her most recent album Christmas Eve in Bethlehem, while ‘Joy To the World’ and ‘Joyful, Joyful’ are collided together to create a seamless medley that is gifted to us by Phil Wickham, arguably one of today’s most honest and inspired worship leaders around.

Dinah Wright (originally named Dinah Smith, having contributed songs to the Shane and Shane catalogue like ‘Tremble’, ‘Let it Be Jesus’ and ‘Who You Say I Am’) lends her voice to ‘Winter Snow’, originally penned and sung by Catholic artist and CCM icon Audrey Assad, and though it isn’t necessarily the most famous originally written song (not a carol) written by the singer-songwriters of today; the song does have it’s place on this album by Shane and Shane, as this sombre and piano prominent melody gives rise to the lyrics a little more as we reflect on what it means for God to come incarnate like a winter snow. The last remaining collaboration is originally written song ‘Face of God’, again featuring Phil Wickham’s vocals as both Shane Barnard and Phil Wickham trade the verses and choruses to create a song that, perhaps, one of the most emotive originally written Christmas songs since Casting Crowns’ ‘Somewhere in Your Silent Night’. A song about what could’ve been the response of Mary, the wisemen and the shepherds as they stared and witnessed the face of God being brought into humanity; Shane and Shane have recorded something special in this song- dare I say that Phil could even record the track- without the Christmas influence- and release it on his own at a later date?

A Worship Initiative Christmas, Vol. 2 is a must have for anyone who appreciates and enjoys worship music and Christmas music- both the Christ-centred and the holiday kind. Dare I say that Shane and Shane are even about to rival Phillips, Craig and Dean as the group of all groups who create great worship covers? Because maybe, just maybe, Shane and Shane have the edge. In fact, they do. With currently now 14 albums and 3 EPs full of popular worship songs under their belt, alongside now two volumes of Christmas melodies to share with us, Shane and Shane and their ministry at equipping churches around the world with songs that encourage and impact, show us just how committed they are to their ministry. While the duo may not be publicised in radio as much as before, their passion and heart are still present and infectious, as every song on this Christmas album oozes over enthusiasm and encouragement, as some, if not most, of these songs on this album are some of my favourite Christmas carols, ever! Well done Shane and Shane for these songs, can’t wait for The Worship Initiative Vol. 17, whenever it comes!

3 songs to listen to: Face of God, Breath of Heaven, Winter Snow