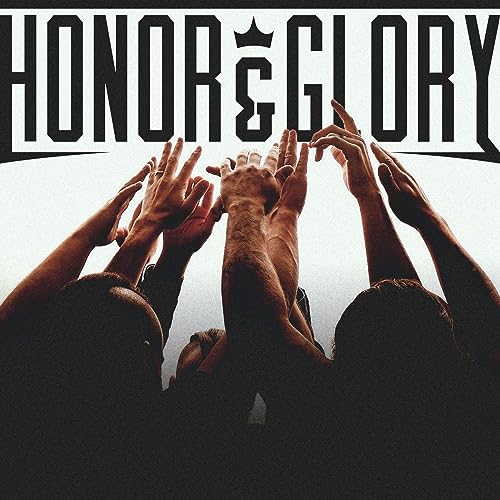 One of the most earnest, authentic, vulnerable, honest and inspiring worship bands to originate within the past few years, is rock band Honor & Glory. I know, I know; we all might be at worship saturation at the moment. Bands like Hillsong (all formats), Elevation Worship, Passion, Bethel Music, Jesus Culture, Vertical Worship, North Point Worship and Planetshakers; have all garnered varying degrees of success. And that’s not including the solo worship artists that have been topping the charts and wowing the hearts of many- artists like Kari Jobe, Phil Wickham, Chris Tomlin, Crowder, Matt Maher, Matt Redman, Martin Smith (formerly from Delirious?), Mack Brock, Tasha Layton, London Gatch, David Leonard, Meredith Andrews, Laura Story, Rebecca St. James, Jeremy Camp, Darlene Zschech, Paul Baloche and Lincoln Brewster. Yes, it probably is accurate that we all are suffering from worship saturation and fatigue. Yet, when I first heard of Honor & Glory, I was intrigued. And this was simply because of the fact that they were w new band who covered Phil Wickham’s “Battle Belongs” as their first single.

Now “Battle Belongs” is one of the most inspiring, moving, confronting, comforting and worshipful songs over the past year, at least to me. A rousing, declaratory, in-your-face, powerful anthem that essentially sings out that Jesus is powerful enough to fight our battles for us, as Phil eloquently and emphatically declares that ‘…when all I see is the battle, You see my victory, when all I see is the mountain, You see a mountain moved, and as I walk through the shadow, Your love surrounds me, there’s nothing to fear now for I am safe with You…’, we are met with one of Phil’s best and a song that I’d encourage you all to listen to at least once, just so that you all can experience the awesomeness that is this track. Honor & Glory, comprising of a few members from the rock band Disciple, released their rock rendition of the worship song as their lead single last year to their new album (which just released within the past few weeks). And I’m a fan of this song- not such much of Disciple… so I checked it out. It was… ok-ish (more on that later on in this review!), and thus as the group ready their debut album… what do I make of these 10 songs of vertical worship to our Father and Saviour; all with a rock twist? Does this mean that Disciple is disbanding and following in the footsteps of Kutless and Seventh Day Slumber in releasing worship albums?

First things first, let’s talk about the lead single first, shall we? Can I just say that nothing can compare to Phil’s original version of the track? Phil’s version is more sublime, eloquent, hoenst, vulnerable and impacting (to me, at least); yet once we acknowledge this rock version as a competent cover, and then to try to not compare it to Phil’s song at all; that’s when we can see that this rendition is solid as well. It’s moving, powerful and every other positive adjective underneath the sun. Honor & Glory knock this out of the park, so to speak. Lead singer Kevin Young is extremely passionate and compelling; and I’d say this version will bring “Battle Belongs” into a brand-new market that even Phil wouldn’t have envisioned it would move into. Isn’t that what we all want to hear? Songs going out into the world and permeating all markets, and becoming bigger than the original artists? Honor & Glory have reminded us in this cover that a song can undoubtedly be bigger than its original artist- and “Battle Belongs” is one of those songs. And so as we dive deep into the rest of the explosive and hard-hitting album, let us thank God for Phil Wickham. His song will undoubtedly live on in the hearts and souls of many- and hopefully this cover of “Battle Belongs” is the first and not the last.

The rest of the 9 songs carries on in theme and in music from “Battle Belongs”- rock infused worship focused songs giving praise to Jesus. The album opener “Victory” is a straightforward worshipful rock song whereby Kevin powerfully and compellingly declares victory over the enemy because we have Jesus on our side. It’s a song we could expect from Elevation Worship or Bethel Music; and works for an inclusion in a Sunday morning setlist at church. “Victory” isn’t a song that makes me go ‘wow’, but it is solid and you can’t deny Kevin’s unwavering passion and love for Jesus. “Fear Of Missing Out” (weird title) is a song that doesn’t feel like a worship song, yet still features introspection, reflection and an admission that we need Jesus. As Kevin ardently relays that there was indeed a time where he felt like he was missing out on the temporary pleasures of the world, the conclusion he comes to in this song is that ‘…I don’t want to miss out on You, don’t let this pass me by, I don’t want to miss out on You, don’t let Your love pass me by, I don’t want to miss out on Your glory, Your anointing, Your power on display, I don’t want to miss out on Your goodness, Your kindness, Your mercy covering me…’– a melody that has tension, but I feel is too easily resolved. Granted, it is a worship song, so I guess the idea of struggling and doubt (and in this case- FOMO) must be resolved in the middle of the song so as the congregation can sing it boldly and loudly. “You Are God (When The World Is On Fire)” is a poignant, heart-warming worship melody that is as energetic as it is intense, with Kevin fervently declaring that Jesus is God all the time and especially in our times of trouble and need; while the first half of the album ends with the album highlight “God Of My Story”. Jon previously reviewed this song here, and I could never succinctly sum it up better than he did, so go ahead and read that review for a more in depth analysis. Or if you want a snapshot of the review, can I just say that ‘…‘God of My Story’…is still a song that is catchy and powerful, emotive and heartfelt, as Kevin Young tries to emulate the power-pop vocalists of yesteryear- namely others like Jon Steingard and Adam Agee, to create a sense of nostalgia when I hear this track, one that has made this song feel as though it’s familiar, even when it’s not. This is what has gravitated me towards this new song by the band- of its similarity to the Jon Steingard-era of Hawk Nelson, as well as the 2009/2010 Everything is Different Now phase of Stellar Kart- both of which I firmly believe, are eras of CCM that are some of the most emotive, vulnerable, heartfelt, and poignant, which is why I quietly have high hopes for this new side-project, from Disciple. I mean, Stars Go Dim were initially a side-project from Pillar, and look at them now, right? Maybe that can happen with Honor & Glory? ‘God of My Story’ and its lyrics deliver a compelling reminder of God’s faithfulness and sovereignty, as Kevin relays, ‘…when I look back on my life, the successes and failures and everything in between, I can see the handwriting of God through it all, and a constant reminder of his overwhelming faithfulness…’…’

“Come Alive”, an earnest and pulsating rock/worship song, features Kevin ardently giving God the praise,- with the song feeling like it’s a track from Disciple (can be read as a good or bad thing!); while “Glory Of God”, another album highlight for me, passionately speaks about giving glory to God simply because of who He is. With the chorus actually being the bridge of the song “Radical” by Disciple, this creative and inventive melody proves to us that Honor & Glory aren’t just another hip worship band that will fade quickly- I reckon they’re here to stay. And as we sing out that words that ‘…so I wanna tell the world that Jesus is alive and His mercy is unfailing, His love is everlasting, I wanna tell the world that Jesus is alive, so here I am, take all of me, not just my mouth but let my hands speak the glory of God…let me be Your hands, let me be Your feet, let me be Your voice inside of me…’; why wouldn’t we be as joyous and passionate as Kevin and co.? “Greater”, a track similar in theme and style to Hillsong Worship or Casting Crowns, is a relative subdued track that powerfully expresses that Jesus Christ is greater than any other love on this year; while “Won’t Start Now” is a piano led ballad and a thought-provoking track about Jesus never failing us and not starting now (similar in theme to “Do It Again” from Elevation Worship). Honor & Glory ends with the 8 minute slower-paced worship track “Jesus We Love You”- a cover from Bethel Music from their 2015 album We Will Not Be Shaken. It’s a stirring cover and a worthy rendition- and together with an epically awesome guitar solo midway through the track; it’s a beautiful way to end an already brilliant album.

The question, after me listening to Honor & Glory’s debut album, is this: will Honor & Glory as an artist be respected in the CCM industry and in the rock music industry? Should Disciple fans be worried about their band possibly breaking up? And the answer is… well I guess those two answers cannot be given straight away. Sure, this release is a solid, rock/worship album. But it may be a one-off. Disciple fans can breathe easy for now… and it’s also still early days to know if the band will truly take off in the CCM industry. Whatever the case, we have a solid worship album that is biblically focused and pointing to Jesus. It’s an album we all should listen to, and as such, I’d say listen to it even if you aren’t a fan of rock music or worship music. Who knows, these guys may surprise you. It’s not the post polished album and not my favourite of this year thus far (that award goes to Ben Rector!), but Honor & Glory deserve 10/10 for effort, and that’s all that counts, am I right? Well done guys, I can’t wait to hear what God has in store for you in the future!

3 songs to listen to: God Of My Story, Glory of God, Jesus We Love You