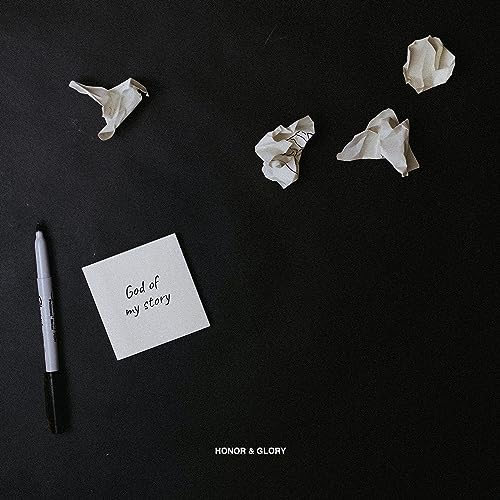 One of the newest signings to BEC Recordings, and sharing an artist roster with David Dunn, Tasha Layton, Lion & Bear, 7eventh Time Down, Brian Ortize, Kutless and London Gatch (to name a few), Honor & Glory has presented their new song ‘God of My Story’, following their release of their cover of Phil Wickam’s standout song ‘Battle Belongs’. Honor & Glory has come as a side project of Kevin Young’s main band Disciple, and while most of the Disciple current lineup are a part of this worship collective now, the difference between Disciple and Honor & Glory, is the focus of the lyrical content. As lead singer Kevin Young describes himself, ‘…the only way you can lead anybody to do anything is by you doing it first. We’re not performing. I’m not trying to be the lead singer of a band. We’re just worshipping…’ There is a sense of humility when it comes from delivering worship music, and as I listen to both ‘Battle Belongs’ and this new one from this quasi-Disciple worship band, I can definitely see some humble moments in these recordings. While for me I found Phil Wickham’s original version of ‘Battle Belongs’ to be one of my favourite worship songs of 2020, Honor & Glory’s new song ‘God of My Story’ is one of this year’s best, original worship songs, and a great listen to if you love similar artists, like Stephen Christian, Hawk Nelson, Tenth Avenue North, or the Newsboys.

One listen to the song and you can see an anthem being sung in the church, waiting to happen, as ‘God of My Story’ is as emotive, anthemic, joyous and upbeat as I can see from other CCM bands like Hawk Nelson, Stellar Kart and Tenth Avenue North- three bands that have recently disbanded…so I guess Honor & Glory can fill in the void left by those three, right? ‘God of My Story’, though I felt as if I’ve heard this song before- just sung by a different artist (‘God of Every Story’, by inspirational CCM singer-songwriter Laura Story, seems thematically similar to this new song by Honor & Glory), is still a song that is catchy and powerful, emotive and heartfelt, as Kevin Young tries to emulate the power-pop vocalists of yesteryear- namely others like Jon Steingard and Adam Agee, to create a sense of nostalgia when I hear this track, one that has made this song feel as though it’s familiar, even when it’s not. This is what has gravitated me towards this new song by the band- of its similarity to the Jon Steingard-era of Hawk Nelson, as well as the 2009/2010 Everything is Different Now phase of Stellar Kart- both of which I firmly believe, are eras of CCM that are some of the most emotive, vulnerable, heartfelt, and poignant, which is why I quietly have high hopes for this new side-project, from Disciple. I mean, Stars Go Dim were initially a side-project from Pillar, and look at them now, right? Maybe that can happen with Honor & Glory? ‘God of My Story’ and its lyrics deliver a compelling reminder of God’s faithfulness and sovereignty. As Kevin relays, ‘…when I look back on my life, the successes and failures and everything in between, I can see the handwriting of God through it all, and a constant reminder of his overwhelming faithfulness…’ One of the worship songs of 2021 that’ll be on repeat on Spotify for quite some time yet, here’s hoping that the ‘debut’ album from Honor & Glory isn’t just a ‘one and done’ album, but an album that can hopefully catapult rock and worship music together in such a way where we become excited for rock renditions of worship classics, and look forward to original worshipful songs from musicians whose rock genre slant can make worship music excitable again. Well done Honor & Glory, for a good follow-up to ‘Battle Belongs’. Looking forward to a full-length album, whenever that arises.