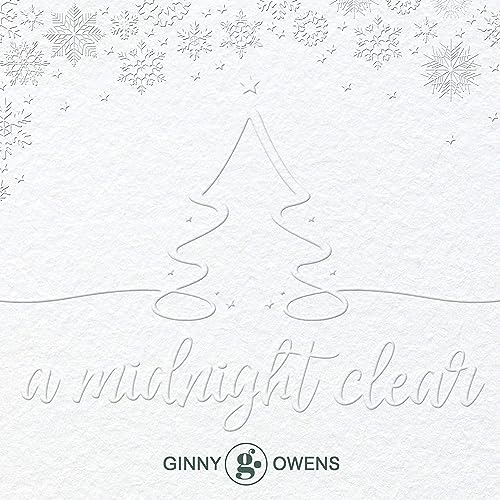 Ginny Owens is one of today’s most respected and prolific Christian songwriters and singers, yet if any of you aren’t familiar with how Ginny’s story can be such an inspiration to each one of us; then let me point you all to my review of the 2016 album Love Be The Loudest where I outlined in the introduction, about Ginny’s hardships. Ginny is blind- has been since birth- which obviously makes our ‘hardships’ sound like nothing; yet this ‘setback’ hasn’t stopped her from creating inspiring and thought-provoking songs for us to be blessed by- doing what God has called her to do. Losing her sight at a very young age is probably a very scary thing to go through; yet you couldn’t and wouldn’t know the hardships she faces just from listening to her heartfelt and personal songs. But as you watch her videos about how she sees the world and how she does everyday things, then your admiration for Ginny will undoubtedly increase. She has determination and tenacity beyond any other person I know of, and as Ginny makes lemonades out of the sourest lemon possible; she has also has decided that every time she releases a stellar and poignant album, not to let the devil win, and she has proved that God can turn adversity around for His glory.

Ginny released a couple of new singles last year in “Remind Me” and “Stand With Me” which speak about asking God to remind us of His goodness and faithfulness every time we forget and lose our way (“Remind Me”) and also about standing together as believers and supporting each other in whatever issues we face (“Stand With Me”). Ginny also unveiled yet another single in “Echo” (which could actually be the third song of a yet to be named new studio album to be released in the near future); where we are met with a poppy 3 and a half minute uplifter, as Ginny passionately relays to us that this song is for anyone who feels like their own story isn’t worthy to tell. Ginny dispels this rumour and lets us know that our story is indeed valid, and that we can and should say our story out loud, so that others can be blessed and inspired. The single “Magnified” followed. And now it’s time to come to Ginny’s latest release- a Christmas EP in A Midnight Clear. Now that we’re less than a week out from Christmas, it’s time to check out this release, don’t you think?

Of an EP of 5 songs, sometimes it’s hard to choose songs out of thousands, and still have the message of Jesus’ birth be intact, and the project to flow well and be impacting and inspiring. Ginny has done this to perfectionism and chosen to take the angle of Jesus’ birth during this Christmas EP rather than the holiday season and the holiday classics that seem to flood our ears around this time. Thus there are no ‘Silver Bells’ or ‘Have Yourself A Merry Little Christmas’ here. Instead you will find two carols (“Hark The Herald Angels Sing” and “It Came Upon A Midnight Clear”- a popular carol and an obscure one!) as well as three original songs. And while I can talk and talk and talk about the two carols, I won’t. Reimagining’s and different compositions of songs we’ve heard before is good and all; yet for me artists generally really impact me with their Christmas originals- it means that songs they’ve written mean something to them. And that is certainly the case with Ginny’s three original compositions.

“The Greatest Gift”, already released on the Christmas EP of the same name in 2015, is an acoustic guitar and piano led ballad, whereby Ginny passionately recounts that the absolutely greatest gift of all that we could receive on Christmas is Jesus born to us and born to save the world. Doubling up as a worship song, “The Greatest Gift” hardly gets off the ground musically, but to me that doesn’t even matter, as lyrically we are presented with a near-flawless offering, and Ginny also proves to be a force to be reckoned with, with her pristine and serene vocals. “Jesus We Adore You”, another slow-tempoed acoustic guitar led reflective ballad and worship anthem, could possibly be sung at other times of the years besides Christmas, as Ginny once again delivers a standout track and personal highlight, declaring that Jesus is the One we need to be praising and the one that we need to be devoting our entire being to. The final original track is “Strangers No More”, sung about Mary and Joseph, and the fact that they were strangers to the whole world until Jesus was born. Then suddenly they were known as Jesus’ earthly parents. Though not as powerful and compelling as Ginny’s previous two original songs on this EP, this track is nonetheless inspiring and hopeful, as Ginny once again reiterates the importance of Jesus’ birth.

Ginny Owens’ latest EP A Midnight Clear, possibly one of the most honest and inspiring Christmas EP’s of 2019 thus far; is bountiful in passion and lyrical genius, as Ginny encourages us to not keep quiet about everything we know in this life, inclusive of our faith in Jesus if we do believe! Reminding me vocally of artists like Nicole C Mullen, Dara Maclean and Plumb; Ginny’s Christmas melodies are made for reflection and personal mediation, as we continue to grasp and understand that the King of the world was born 2000+ years ago, hence making Christmas the most important holiday in human history. Well done Ginny for such a personal, emotional, and refreshing set of songs that has me excited for what you have in store next! How about the rest of you guys? Are you a Ginny Owens fan like myself? Who’s counting down the days until the next Ginny Owens’ song/EP/album?

3 songs to listen to: The Greatest Gift, Jesus We Adore You, Strangers No More