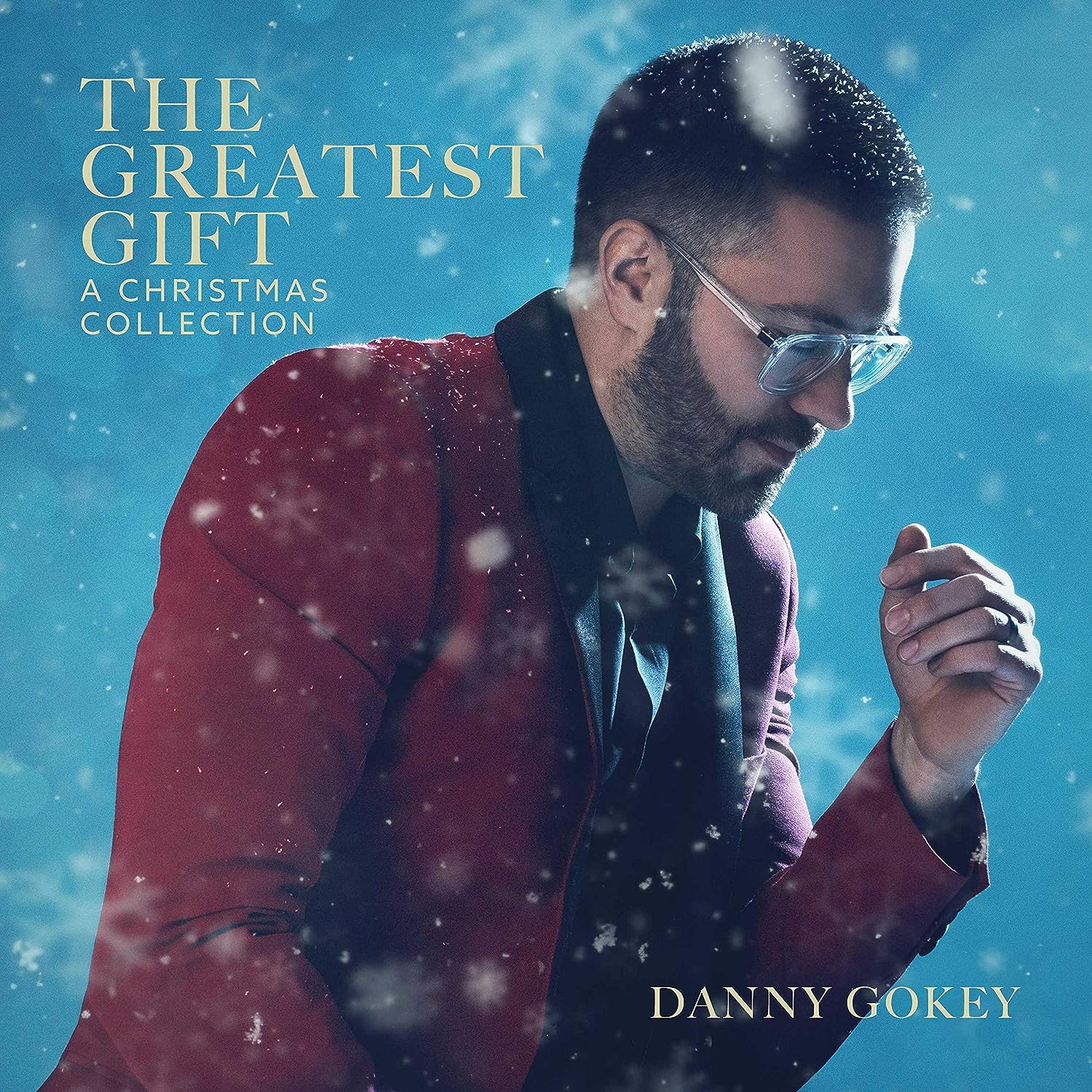 Danny Gokey’s story is one for the ages. If you don’t believe me, read the introductions of our reviews of his albums Hope In Front Of Me, Rise, and Tell Your Heart To Beat Again EP (or even the conclusions, or the whole reviews!); as the in depth description on what Danny went through is covered much more in depth over there that it doesn’t need to be repeated here. Although if you’re the lazy type, I’ll just recap- Danny auditioned for American Idol way back in 2008 but a couple of weeks before he was supposed to go in to sing in front of the judges, his first wife Sophia passed away. Now Danny didn’t win the competition- he was placed third, however his story of loss, and subsequent determination to create uplifting, hopeful and impacting music to honour his wife; has resonated with people all over the globe; and has given him a platform to share the good news of Jesus Christ to as many people as he can. The hit single “Hope In Front Of Me” in 2014 started his meteoric rise to popularity in both Christian and mainstream circles (as his first album in 2010 was an unfortunate failed attempt at breaking into the country genre!); yet fast forward to now, and we see the release of another smash hit. “Haven’t Seen It Yet” is Danny’s first release on Sparrow Records- and from the lyrical content of this single alone- about waiting for God’s promises and believing that everything will come together in His timing; the album of the same name I reckon is Danny’s most relevant and strongest musically and lyrically to date. Don’t believe me? Take a read of Jon’s review and let me know what you think of Danny’s latest!

Still feel inspired and ready to take on the world, courtesy of Danny’s uplifting and grandiose message of hope and security in Jesus? Good. Because this Christmas we’re going to be introduced to a whole lot more hope, joy, love, peace and happiness. And that’s because on top of his 2015 album Christmas Is Here, Danny is back with a brand new Christmas album- this time titled The Greatest Gift: A Christmas Collection. Only standing tall at 10 tracks, Danny provides to us an experience for the ages, and one that will certainly make you feel closer to God, as we worship Him as being the real reason for the season. With audiences having connected with the raw, honest music, and Danny’s profile now exponentially rising due to his step of faith when he was at his lowest point in his life, many songs, even on this Christmas album, are in fact a testimony of God’s goodness and faithfulness and the fact that Jesus keeps his promises; this 3rd place finalist in the 8th season of the A.I. holds nothing back in the holiday seasonal offering! With both well-known carols and original melodies coming together for an inspiring and powerful batch of ten tracks (as well as a few guest vocalists as well!), these melodies are what we all can listen to as we worship Jesus and reflect upon His birth. Probably one of my favourite Christmas albums this year, this album is one for fans of artists like Mark Schultz, Matthew West, or Brandon Heath.

Immediately my eyes gloss over “The Prayer” as a cover of Celine Dion and Andrea Bocelli. So let me start by just saying one thing. And that is this- if you haven’t heard of “The Prayer”, then I think you probably should look at yourself in the mirror and ask yourself why. Because there really isn’t a reason why you shouldn’t be familiar with probably the most iconic and popular song there ever has been. So, I’d say it’s time to rectify that situation. If it sounds like I’m harsh or overreacting, well then I’m sorry. But “The Prayer” is one in a million, and even if you do not like music in general, even if you do not like classical music, and even if you do not like the music of Celine Dion and Andrea Bocelli; I guarantee you will love this song. Even if you aren’t a Christian, and even if you aren’t a fan of Italian music- Andrea sings his parts in Italian; I’d still say that “The Prayer” will offer something of value to you. The song has been covered plenty of times, and I am sure will be many more times as well. As far as Danny and Natalie’s version on The Greatest Gift, Danny and Natalie eloquently deliver all of the lyrics with passion and zeal, while singing together beautifully in harmony also. There’s nothing wrong with this track per se, aside from the quickened pace of the song and the fact that Andrea’s parts are mostly transformed to English rather than kept as Italian; but both vocalists nonetheless sound sublime and I can still say that I enjoy this song. As I am transported to a magical place where nothing else in this world matter except for the out-of-this-world and heavenly vocals declaring ‘…let this be our prayer, when we lose our way, lead us to a place, guide us with Your grace, to a place where we’ll be safe…’; “The Prayer” is a song that I will hold in my heart forever, much like Josh Groban’s “You Raise Me Up”.

The rest of the track list contains traditional Christmas classics, newly penned tracks that could become fan favourites and classics; as well as songs that could double up as worship anthems. “Angels We Have Heard On High” has been covered so many times, yet Danny’s piano prominent pop version makes the song feel fresh and brand-new, as he adds a worshipful chorus instead of the usual ‘gloria, in exelsis deo’- alluding to the fact that this rendition could find its way into churches on Sunday morning this holiday season as opposed to the traditional carol with no alterations. “Silent Night”, driven by heavenly and ethereal keys, is almost like a lullaby, as Danny enlists the help of fellow labelmate Kari Jobe on guest vocals, presenting to us an exquisite version of such an underrated carol with a portion of the song being spontaneous free worship. The track sounds like a hot mess from me describing it, but surprisingly it works and is a standout of mine, as does the Spanish version “Noche De Paz” with David Archuleta. “Joy To The World” has also been covered many, many times, of which some versions work, and some don’t; yet Danny’s orchestral anthemic version is one of the best versions I’ve heard in recent memory, due to the arrangements of the instruments and Danny’s passion for the holiday season. “O Come Let Us Adore Him” and “Have Yourself A Merry Little Christmas” are the remaining carols present here- the former being one of the most recognisable carols ever, and once again transformed into an orchestral anthemic version that is probably one of my favourite versions ever; and the latter being one of the most popular holiday songs ever, a piano only rendition of what could be described as the only downer on an otherwise near-flawless album, simply because it’s only with the piano and it’s the last song- there needs to be a full band version of this pronto, and there needs to be more songs after this. Seriously, another Christmas album from Danny needs to happen soon!

Whenever an artist release original Christmas material, there’s a risk involved. There’s the chance that the audience won’t connect with the song like other more well-known Christmas songs; however with Danny’s three originals there’s the sense they they’ll be in rotation on radio and in people’s homes for many, many years to come. “Christmas Night” is led by the piano, and has Danny eloquently reiterating that beautiful aspects of Christmas Eve, inclusive of the act of wrapping presents for his children (similar in theme to “This Christmas (Hang On The Mistletoe)”; while “The Holidays Are Here” is a jovial declaration that this holiday is meant to be celebratory and meant for dancing and jumping because of the holidays, and subtly because of Jesus. Yet it is “Until You” that is the real diamond in this set of 10 diamonds. With Danny singing from the point of view of the people of Israel calling for a King to save them, we are reminded that the way Jesus entered into the earth was by no means coincidental. He in fact humbled Himself to be a baby in order for us to learn about not judging and relying on someone completely unexpected in our eyes. Putting trust in someone else is scary, but necessary if we are to survive this life. And the way that Jesus was born He is in fact saying ‘are you willing to lay down your life for Me, for a baby, not for the King of the physical world but for the King of the whole world?’. It’s remarkable the nuances and subtle messages that one can read into how Jesus was born yet Danny encapsulates our thoughts and emotions quite well in “Until You” as he delivers what I reckon is THE CHRISTMAS SONG of the year! Just sing out ‘…glory, glory, Christmas morning, Hallelujah, all is new, Love came down and changed our story, every heart was waiting until You…’ and tell me you don’t have tears in your eyes!

“…Music, right now, is changing so fast, and we’re trying to keep up with these trends. We’re trying to figure out ‘what’s the next hot thing,’ and when you put Christmas through that, it sometimes loses something. I think, for me, maintaining a classic traditional spirit — but also fitting into the newer sound — is one of the goals…” Streaks ahead of Christmas Is Here from 2015, Danny Gokey’s The Greatest Gift: A Christmas Collection is a breath of fresh air, and a must to hear this Christmas and every other Christmas from here on out. Quite breathtaking, grandiose and anthemic, Danny Gokey’s new Christmas album is fantastic for listeners who are longing for a theme of hope in their lives and reassurance that Jesus is with us right at this moment. An album that’s certain to be a best seller in both Christian and mainstream holiday markets, Danny’s album is sure to be on my iTunes playlist during this Christmas season and beyond! Well done Danny for such a poignant, powerful and prolific Christmas album, and one of my favourite CCM male vocalists since Josh Wilson, Brandon Heath and Matthew West.

3 songs to listen to: Until You, Christmas Night, The Prayer