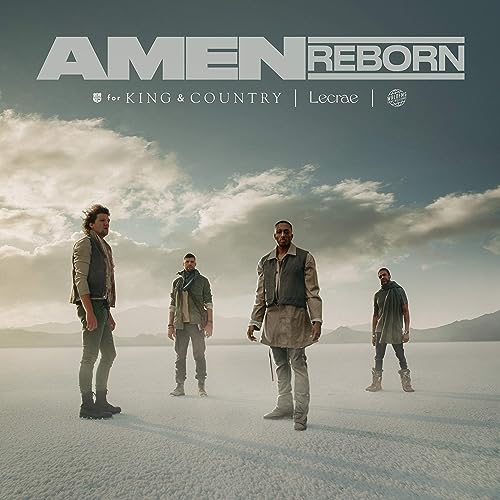 for KING & COUNTRY have always been a band that are a joy to listen to, and no matter the preference of musical genre, I’m sure, that anyone who hears this infectiously hopeful and poignant duo, are sure to be blessed and encouraged also. Relatively new compared to a lot of the CCM pioneers that have shaped what Christian music is today (artists like Switchfoot, Skillet, Carman, Steven Curtis Chapman, Amy Grant and Michael W. Smith, to name a few); this duo from Down Under nevertheless have crafted their career in a way that allows the songs they’ve carefully created, to sit with listeners in a reflective way, delving deep within our psyches and challenging the very nature of what we were to believe is true, about ourselves, God, love, life and the rest of it. Joel and Luke have created something special in for KING & COUNTRY, and this is a band that’s certain to make waves, continually in the CCM realm, but maybe, just maybe, in the mainstream market as well. For the band have been a household name for quite some time, ever since their chart-topping song ‘Busted Heart’ hit the radio waves all those years ago, having taken the media, listeners and the whole general CCM industry by storm since their arrival to Word Label Group back in 2011.

Relocating to Nashville in the early 1990s as their father pursued a new career opportunity, for KING & COUNTRY has been touted many times as the Aussie version of Coldplay- with a focus more on unique instrumentation and anthemic moments of revelation, realisation and just plain powerful songs full of rousing declaration and proclamation. Fast forward till 2021, and we’ve seen the duo mature and grow in their musical pursuits. Songs like “Fix My Eyes”, “Busted Heart”, “Middle of Your Heart”, “O God, Forgive Us”, “Messengers” [feat. Lecrae], “It’s Not Over Yet”, and more recently “Ceasefire”, and new songs “Joy” and “God Only Knows” are just some examples of the songs that the band has shown us, and the calibre of them. The band has managed to show us what it means to succeed in the CCM industry, while still delivering engaging and thoughtful melodies that encourage us to see and look beyond ourselves, as we challenge the status quo and ask ourselves the continuing question- ‘why’ and ‘why should this be if I don’t agree with the way that it is now’? Topics like self worth, identity, the human condition, and man’s relationship with the creator and the created, are some of the messages scattered through these songs.

2020 saw the band unveil a timely and emotive song to the masses, and a necessary one at that. For I’m sure by now people know about COVID-19, or the more common name for it, coronavirus, and its impact both heath-wise and economically on a global scale, affecting almost every country around the world, for about a year now. We are in February 2021, and personally, I don’t think we’re that close to the virus actually going away. Yes, we have a vaccine, but then there are side effects and trials, and seeing for symptoms of the vaccine and the rest of it. Even still, it is during this time where our physical morale seems to be going under, where I’ve realised that people have been leaning on God more and more- worship songs are being sung like nobody’s business, and we’ve been seeing the Lord move in ways unimaginable in people’s lives around the world. Though we are distancing physically, the connection that we’ve having with people in a general sense seems to be going up, with more Skype calls, more phone calls, even Zoom calls, and just connection through facebook, twitter and every other mobile and technological device there is, especially when there’s lockdown around the world, and more virus strains (most notably the South African variant and the British variant) that are coming to people’s attention within the last few months. ‘Together’ unveiled in May 2020, and featured Joel & Luke with gosel legend Kirk Franklin and mainstream pop icon Tori Kelly; and was a song that couldn’t have come at a more opportune time. Premiering this song across a nation needing hope on May 1st 2020, on ABC’s Good Morning America (GMA); ‘Together’ was a reminder to face things head-on united and together, and reminded us all that the only way through this virus is if we all did our bit, we all joined, regardless of belief or value, and just helped our fellow men and women, because it was the right thing to do. Now here we are in February 2021, and this time, we see another song being released that has given people comfort over the last couple of years- a reimagined version of ‘Amen’, from for KING AND COUNTRY’s 2018 album Burn the Ships.

‘…‘Amen’ is a song of deep personal significance to us. It represents a sort of death and new life, a rebirth if you will…’ [Luke Smallbone] ‘…When we performed it last autumn at an award show with Lecrae, Tony Williams, and a gospel choir, it launched the song into another stratosphere of meaning. So with 2020 now in the rearview mirror, we look to move past these global hardships together and start fresh with a new perspective, which is the core essence of the song. And thanks to Lecrae’s galvanizing prayer of humility along with Tony’s characteristic and purposeful voice…’ [Joel Smallbone] ‘…what I love, and this is just a testament to the way you approached it in the subject matter of it, was there was such a humility. I’ve been calling it a prayer because what it felt like was this beautiful, reverent prayer from you. I dare say, even on behalf of the black community, saying, ‘Hey, how do we, on every level — socially, spiritually, politically and emotionally start healing?’ 2021, I believe, I’ve dubbed it the year of healing in this nation…’ [Joel Smallbone, from Instagram Live] ‘…oftentimes, the music industry is more about consumerism than it is about transformation. It really does turn into a place where people just want to figure out how to make people buy, instead of how to really serve people artistically. What I appreciate about you all is that sincerity; it’s something that’s rare…’ [Lecrae, from Instagram Live]

It is in these quotes above that I leave this ‘review’ post, and be reminded that such a song as ‘Amen’ is certain to bring with it, healing and purpose for many, in the upcoming months to come. Joel and Luke have created a space for us to respond in whatever way we know how, and for us not to be worried about the person to the left or right (in a metaphorical sense), but to focus on ourselves and our response to such thought-provoking songs that we hear. ‘Amen’ is once again another song of theirs that has hit the nail on the head, as we see the importance of agreeing with one another, and being unified in a way of understanding and realising that things need to be done in this world, help needs to be sought if we want to bring healing to people damaged by this last year of 2020 and all that it brought us. ‘Amen’, as ‘old’ as this song is- it came out in 2018, is nevertheless a great reminder for unity within the body of Christ, and a way for us to set aside our differences and concentrate on what unites Christians, and to move into this year, with that mentality. A song that’s certain to be replayed again and again on my Spotify playlist for months to come, ‘Amen’, can hopefully be as song, like ‘Together’, that can unify and bring together people, as we navigate uncharted waters of COVID-19 for the foreseeable future. Well done Joel and Luke for such a poignant and compelling song, can’t wait to another full-length album in the future, whenever that arises.