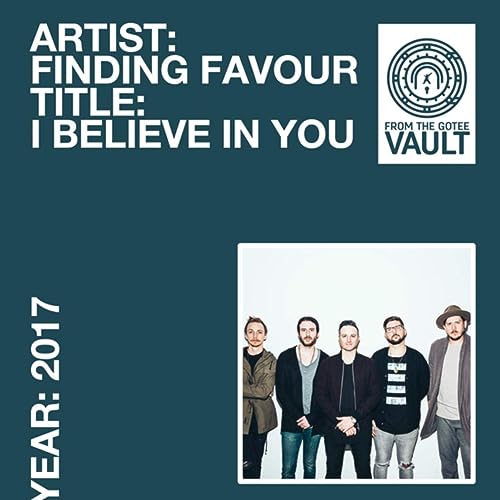 Finding Favour– I Believe In You (Single) (Amazon mp3/iTunes)

Around 7 years ago in 2013 for all of your maths nerds out there!), we were glimpsed into whom I reckon is one of today’s most underrated bands, and at the time one of the future’s most promising CCM bands. As TobyMac endorsed Finding Favour (who were signed onto his label Gotee Records!), the band were making a name for themselves in a big way. Having released their self-titled EP digitally in March 2013 and the physical copy in May 2013, followed by their first full length debut album Reborn in June 2015; the band unveiled the ‘full length’ sophomore album Farewell Fear in 2017. I say ‘full length’ because it’s only 8 songs long (well 10 songs if you include the intro and the outro lasting for about 1 minute each!)- it is a ‘sophomore slump’ in every sense of the word, however the passion and energy of Blake’s vocals overshadows any of the shortcomings, including a short album duration; in my honest opinion. You can read my review of Farewell Fear in full, yet here we are 3 years later with no word or update on anything new in the pipeline from Blake and his friends. Is it premature to suggest that these guys are quitting as a band, like Downhere, Tenth Avenue North, David Crowder*Band, 1GN and Pure NRG before them? Perhaps, but maybe that’s where we’re being hasty! It’s indeed true that Finding Favour released their single “Old Soul” last year (of which you can read the review here!), so perhaps a new project is being unveiled at the end of the year or next year sometimes- after all, COVID-19 has thrown every album partially out of whack. However if you guys want to hear more inspirational country-CCM/pop from these guys…then look no future than the latest single “I Believe In You”

Released as a ‘lost’ single, “I Believe In You” dropped last week, but was actually recorded in 2017- a demo that never got to see the light of day. Supposed to be present on Farewell Fear; this track is one of my favourites of 2020 (or shall we say of 2017!) as Blake and his friends passionately and eloquently reiterate the truth that we believe in God because of everything He’s done in our lives, that ‘…I believe in You, the One that walked on water, the One that calmed the seas, You opened blinded eyes, I believe Your miracles and mercies, Your promises are true, You are the Son of God…’, across vibrant keys and captivating guitars. Extremely CCM in nature, as well as joyous and celebratory; Finding Favour are definitely here to stay after this track. Yet given that it’s an old ‘unreleased’ melody, yet nonetheless still hopeful and inspiring; there is a possibility that anything new from the band may be in line with “Old Soul” musically and lyrically rather than this track…which isn’t really a bad thing at all when you think about it.

“I Believe In You” may have a cliché title and a cliché sound, however there’s something about this melody that has my toe tapping and my head bobbing. And like the debut EP and the debut full length album, as well as Farewell Fear; this explosive and heartfelt tune has further convinced me that TobyMac has got it right once again- Finding Favour is a band to watch out for, and it’s evident that from “I Believe In You” that they’re back to what they know best. Yet with “Old Soul”, these guys are experimenting in different genres than what we’re used to, and that’s ok too. Musically this track is quite safe and may not be risky enough, but I reckon that “I Believe In You” is just what is needed from Blake and his friends, as we delve into the concept of knowing our identity in Christ and trusting in Him completely. Well done guys, you deserve the acclaim!