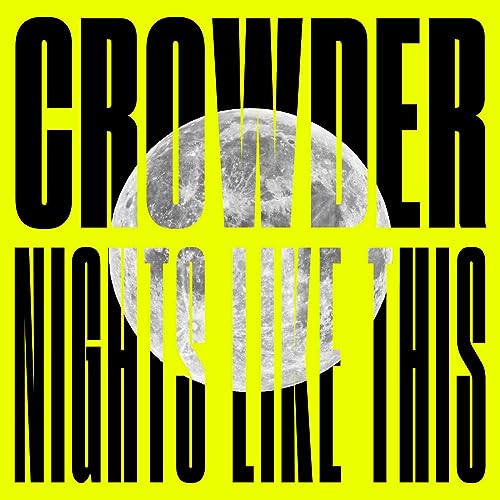 There have been many times that I’ve said it before. So this time I’ll say it again! David Crowder is an enigma. There. I’ve said it. It’s a well known fact that you cannot put him in a box musically, as he’ll just jump right out of it and prove you wrong. Yet if you do not know who I am talking about, then I guess you need not look any further than the time in 2012- when David split from his bandmates from the band David Crowder*Band, then so soon after formed his own band titled Crowder. We may never have known why this occurred, and we all have many different viewpoints. Maybe there was animosity. Maybe his bandmates were difficult to get along with. Maybe David felt God calling him to go solo, and they split amicably. Whatever the case, what eventuated was The Digital Age (with Mark Waldrop and Mike Dodson as co-lead singers) and Crowder’s solo music ministry.

Now, don’t get me wrong, The Digital Age is a fantastic band. Evening:Morning and Galaxies are solid offerings. However the success of The Digital Age isn’t even a fraction of the fame that Crowder has felt since then- even a split from his former bandmates didn’t hinder Crowder at all, as Crowder’s continued solo albums flourished with critical and commercial acclaim. Neon Steeple was one of my favourite albums of 2014, spawning hits such as “I Am”, “Lift Your Head Weary Sinner (Chains)” and “Come As You Are”; and American Prodigal, with its hits such as “Run Devil Run”, “Forgiven”, “Back To The Garden” and “My Victory”, was one of my favourite albums of 2016, so much so that I rated the album 5/5 (you can read my review here!). Crowder also unveiled the experimental yet thoroughly resonating 3rd solo effort titled I Know A Ghost and this year he is back with his latest single “Night Like This”. Having released an EP with three ‘remixes’ of the smash hit studio track radio single from I Know A Ghost; how do I as a reviewer and as a fan of Crowder’s, rate Night Like This EP, considering that Crowder has always been a favourite artist of mine? Objectively speaking, is this release comparable to his other singles or other EP’s this year such as releases from TobyMac (The Lost Demos), Carrollton (Carrollton), Hailee Steinfeld (Half Written Story), John Tibbs (Wilder Things), and Cody Carnes (Run To The Father) to name a few?

To understand these remixes and rerecordings from Crowder of “Night Like This”, I’d say it’s imperative and necessary to revisit the original recording and to read my thoughts on that song. And the verdict is… the same verdict from a year and a half ago. And it is this. That I’m even more certain that Crowder does not do full-on country well, and that genre should be left to the experts such as Blake Shelton, Brad Paisley or Keith Urban- it’s not that “Night Like This” is bad, it’s just that Crowder’s voice doesn’t fit at all. “Night Like This” is alright, and there are some pretty impressive choir gang vocals as backing vocals, while it’s a good thing that Crowder has passion and does try here. But “Night Like This” sadly is a misstep. While on the surface, these three renditions of “Night Like This” are quite compelling (especially the Country Fried version, which is slightly more rockier and dynamic than the others!), these tracks get old quickly. Lyrically, the song is great as it’s about the celebration of Jesus being in our lives and that there isn’t a night better than a night with Jesus- the fact is unfortunately that this track is too vague and unmemorable.

No matter how this song has impacted me (or in this case failed to!), Crowder is still one of the most progressive, experimental and encouraging worship artists ever, as he continues to play his music in an era without the DC*B- and here’s hoping that there are many more albums in the future from the talented singer/songwriter. Time and time again, Crowder has reminded us that a band break up isn’t gonna hold him down. In fact, I reckon he’s just getting started. However “Night Like This” is a horrible misstep- and let’s just hope that next album Crowder is back to his brilliant best, shall we? So what are you waiting for, pick up some Crowder (I Know A Ghost and/or “All My Hope” single and/or American Prodigal and/or Neon Steeple- but not Night Like This EP!!), and let’s have a party with some banjos and harmonica, shall we? Maybe with some Steve-3PO as the drummer as well!