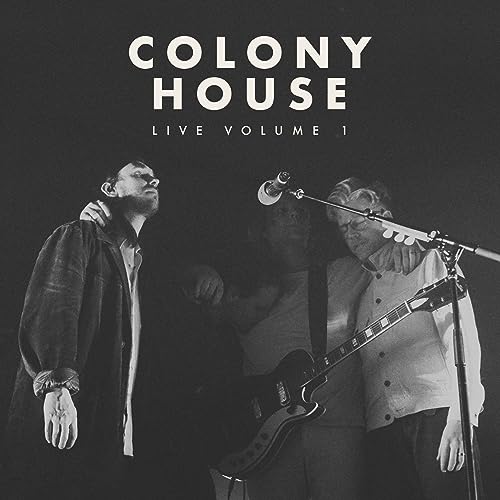 Its rare that an artist’s kids follow in their parent’s footsteps. If someone’s parents have been in and amongst and around music for quite some time, it’s only natural for them, children of people in the spotlight, to choose a career that is out of it, right? Well, case in point, about Steven Curtis Chapman (SCC), famous, impactful, and popular musician within the CCM industry and community, and his sons, Caleb Chapman, and Will Franklin Chapman, both of whom are part of mainstream indie-rock quartet Colony House. In this scenario, Caleb and Will continued to travel along the line of music that their dad walked along all those years ago, and while Colony House are an indie-rock mainstream band as compared to SCC who is in the realms of CCM; I’m still firmly of the belief that music- all music, can do one of either two things- bring people farther away from God and each other, or bring people closer. There is no middle ground on this.

So even though Colony House are not a Christian band (even though I firmly believe that both Caleb and Will have a solid faith in Christ), God has definitely used them over the years, to deliver songs of poignancy and encouragement, we at the site, 365DaysofInspiringMedia.com included. So much so that we decided to write about their impact and influence in a blog post in which we undertook last year, highlighting songs from their career like ‘Silhouettes’, ‘Keep On, Keepin’ On’, ‘Waiting For My Time to Come’, ‘You Know It’, ‘You & I’, ‘Looking For Some Light’, ‘Where I’m From’ and ‘When the Walls Come Crashing Down’. They were indeed one of the artists that surprised us in a good way, when it came to writing about newer-artists in particular, for a certain section of this 2+ year blog series about impactful and influential artists in modern music history…so for Colony House to release a new project in 2021 (albeit, ‘just’ a live album comprising of their hits spanning across their three albums), I was naturally intrigued. I didn’t write the blog about Colony House (my brother did), and so I thought that it would only be fitting for me to share my own musings and thoughts about Colony House Live, Vol. 1, that was unveiled digitally on January 29th 2021.

Colony House Live, Vol. 1 is a live project that really delivers the best that this band has on offer, spanning across their first three albums When I Was Younger, Only the Lonely and Leave What’s Lost Behind. While I haven’t really listened to much of Colony House in the past, I have heard quite a bit of this live project, and from what I have listened to, I’ve enjoyed very much so. Songs like ‘Looking For Some Light’, ‘The Hope Inside’, ‘Keep On Keepin’ On’, ‘Waiting For My Time to Come’, ‘Where I’m From’, even some of their earlier tracks ‘Silhouettes’ and ‘You Know It’, shine a lot here on this live project, and really hone in on the fact that some artists sound better live…and Colony House is one such band. I won’t really go much into depth here on these songs- my brother Josh did an excellent job when he was blogging about the band in general, and in his review of Leave What’s Lost Behind, but what I will say is this- this album is everything that anyone could be looking for if you want to start upon the Colony House listening experience and journey. Just like how Third Day’s albums Chronology I and Chronology II highlight successfully the first ten years of their illustrious career, so too has this live album encapsulated a lot of their standout songs throughout their 3 albums to date. While the live album could’ve had a few more representations from Only the Lonely (only ‘Was It Me’ and ‘You Know It’ on the live album, were from the second album- songs like ‘I Cannot Do This Alone’, ‘Lonely’, ‘You and I’, ‘This Beautiful Life’ and ‘Where You’re Father’s Been’ are nowhere to be found on this live project), and it could’ve been longer in length (18 tracks seem to whiz by too fast, maybe 21 or 22); these minor quibbles are neither here nor there, as this live album testifies to the fact that live music is where the energy is at.

Once restrictions ease generally around the world and the Delta variant is seemingly under control, I’m sure the band is going to have a lot more newer fans because of lockdown and people discovering the band’s music, when they’re at their homes (myself included). Let’s just say that I’m starting to quietly become a new-ish fan of the band- give it a few more months and maybe, I can say that their impact and influence in music today is warranted. Just reading and perusing through my brother’s blog, and he has indeed made a comparison- that Colony House and their style of music is akin to that of Switchfoot…and knowing me, I do love my Switchfoot (they are currently sitting at Favourite Band #2 just behind Delirious?)…so, maybe that can be a vote of confidence that I’ll enjoy Colony House in the future? Whatever the case, this live project is a great way to introduce people to a band that I firmly believe will have massive impact in both the mainstream and Christian music industries in the weeks and months to come. Well done Colony House for this enthusiastic and passionate live project. Looking forward to album #4, whenever it comes. Now…off to listen to When I Was Younger to start off the Colony House journey, shall we?

5 songs to listen to: Looking For Some Light, The Hope Inside, Keep On Keepin’ On, Where I’m From, Waiting For My Time To Come