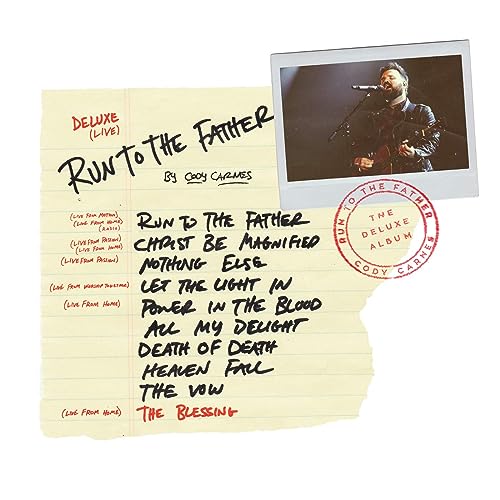 Deluxe edition albums are a bit of a mix bag, generally speaking. I reckon they work when released alongside the standard edition of the album… yet when the deluxe edition album is unveiled around about a year later than the original album, well I’d say that this expanded version better include some epically awesome tracks for anyone to even consider listening to the rereleased album. Unfortunately, Cody Carnes’ Run To The Father, while worshipful, personal, honest and theologically sound in its own right, is an album that has had the deluxe treatment, and has as a consequence fallen flat. Yep, Run To The Father (Deluxe) is extremely underwhelming… and more especially so given that all of the extra 9 tracks are live versions of some of his big hits, with each of them unnecessarily long in duration. The other ‘new’ track is a radio version of “Run To The Father”, and in my opinion this version isn’t needed at all, as the message of worship and adoration to Jesus isn’t translated that well here.

So, let me say that I’m not knocking Cody Carnes and his worship leading. I’m not knocking his songwriting, nor his passion. If this album was released alongside the standard edition or even instead of the standard edition, I’d rate this project quite high. We actually did rate the album quite high, and you can read Jon’s review of Cody’s album here. I was still impressed by songs like “Death Of Death”, “Christ Be Magnified” and “Run To The Father”- these tracks won’t ever get old in my opinion!. But it is the label’s decision to cash in on Cody and Kari’s song “The Blessing”, and stretch an album that doesn’t need to be stretched. Because it is indeed the un-timely nature of this release that is the main issue. We all are consumers of new music, and we all are restless when our favourite artists don’t release something new, this is me talking to myself as well; so… let me say that I don’t know what Cody was thinking! Perhaps remixes or acoustic versions or new tracks (and a whole B-sides project!) would’ve been more appropriate and would’ve been received better by myself and others. But as it stands now, I’d bypass this release and stick to the original album, with fewer tracks and more opportunities for me to be impressed. I don’t know, you may like unnecessary extended editions of albums. Yet for me Run To The Father (Deluxe) feels like a marketing and cash grab. Is it though? No doubt Cody is sincere here, but something here doesn’t gel. But anyway, you all can be the judge? What do you think about these songs we all know and love?

3 songs to listen to: Run To The Father, Christ Be Magnified, Death Of Death