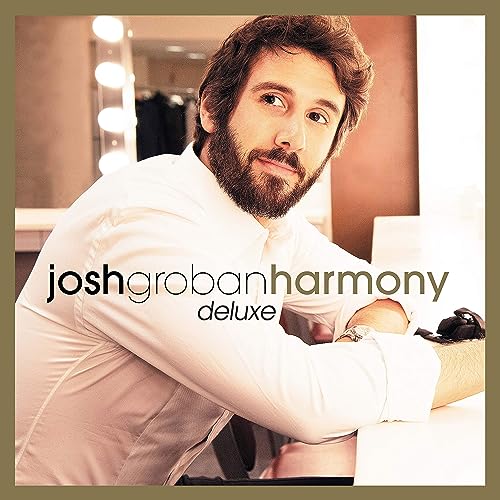 Josh Groban, singer/songwriter and vocal extraordinaire, and known for his resonating operatic pop; was probably one of the first artists I had ever listened to that captured my soul and redefined what good music actually is, and how God can touch a life with such music that I hadn’t known was possible. Prior to me reading my brother Jon’s new blog post about Josh a couple of years ago, and hearing some of his most inspiring hit songs for the first time and being amazed by his exceptional prowess as a singer and a song-writer; to tell you the truth I had never really heard of Josh in the sense that I actively sought him and his music out. I knew he was the guy who sang that smash hit “You Raise Me Up”, and I knew he starred in the TV show The Good Cop a few years ago on Netflix. I also knew that he sang a version of “The Prayer” with Celine Dion quite a number of years back- but that was the extent that I knew about him. It was because I has initially assumed that Josh was singing Broadway/opera/anthemic stuff all the time (and that genre wasn’t really the genre I was ‘into’ back then), that I didn’t really explore Josh’s music further. But as Jon has firmly reiterated in his Momentous Mondays blog post, and what I have come to know through Josh’s music (especially hit singles such as “You Are Loved”, “Feels Like Home”, “Brave”, “To Where You Are”, “February Song”, and the Stevie Wonder cover of “I Believe (When I Fall In Love It Will Be Forever)” to name a few; not to mention the original Christmas hit “Believe”); is that artists don’t have to fit the mould of our boxes that we’ve made for ourselves, in order to impact and inspire us.

As a Christian, early on in my life I had been totally immersed in Christian music. And that’s fine- it means that I’ve made a thought out and active decision not to be surrounded by music that doesn’t lift me up, that speaks about meaningless things such as sex, drugs, money and fame. But listening to only Christian music means that I’m not allowing God to speak through everything else- the mainstream music that is positive and hopeful and does build us up. Over the past few years we’ve blogged about as well as reviewed albums and songs from artists like Kelly Clarkson, Selena Gomez, Train, Goo Goo Dolls, Alicia Keys, Delta Goodrem, Guy Sebastian, Demi Lovato, Thomas Rhett, Maddie & Tae, Sabrina Carpenter, Dua Lipa, Little Mix, Dami Im, Backstreet Boys, Hanson, Pentatonix, Ed Sheeran, Lindsay Ell, John Mayer, Sugarland, Colony House and Hailee Steinfeld… to name a few. And both my brother Jon and I have grown in our musical tastes. But it may not have been that way had it not been for us taking a chance on Josh Groban and his music. Bridges holds a special place in my heart (you can read the review here!)… and now here we are in 2021 with a brand new album called Harmony. The standard edition of the brand new project released last year, and now this year we are treated to the deluxe edition, with 6 brand new, never-before-heard songs.

Josh Groban more or less is a covers guy. He’s the kind of guy who records maybe half an album full of original tunes- and that has worked for him over the years. He’s kind of like Michael Buble but in the opera and Broadway musical space. So it’s no surprise here to find that most of Harmony (all except for “Your Face” and “The Fullest”) are covers, while all 6 songs on the deluxe edition are covers. Yet as many or maybe all of you have read Jon’s review of Harmony, and also immersed yourself into all things Josh Groban… perhaps any ‘review’ of mine speaking about these compelling and thought-provoking and comforting six songs… won’t do this project any justice. Josh has delivered well rounded and exquisite renditions of songs from The Pretenders (“I’ll Stand By You”) and Johnny Nash (“I Can See Clearly Now”) respectively- with the former being a real standout- as guest vocalist Helene Fischer’s soothing voice adds a greater depth to an already iconic track- and a relevant track today about standing by friends and loved ones at all times. Nat King Cole, Simon & Garfunkel, Gloria Estefan and The Searchers are the other artists Josh has covered here as new tracks- and though these songs aren’t known to me at all, they do show that Josh’s versatility as an artist is a great reason why he’s still one of today’s most respected and popular artists. I do not know what is next for Josh as a singer- maybe a country album or an album of hymns?- but sky really is the limit here. Harmony is a treasure to listen to, and all of you should buy a copy straight away! Harmony (Deluxe) builds upon perfection, as Josh continues to impress and remind us why he’s still here providing to us hit after hit after hit.

Operatic pop wasn’t really my thing before (and at times I still can’t handle it in large doses!), yet there’s something about Josh’s music overall that makes me smile. With not really any song (except for maybe “The Fullest” and “Your Face”- the originals!) speaking about Jesus, this theoretically should be an album that doesn’t resonate with me. But God has shown me that mainstream artists have good music too, and I’m glad that God is working through this, because the world needs to hear about this amazing album right now and be inspired just like me! So what are you waiting for everyone! Harmony needs to be bought. No questions asked. Therefore, let me say well done Josh, you have literally surprised me in a good way; can’t wait to hear and see what you have next up your sleeve in the future!

4 songs to listen to: Your Face, The Fullest, I’ll Stand By You, I Can See Clearly Now