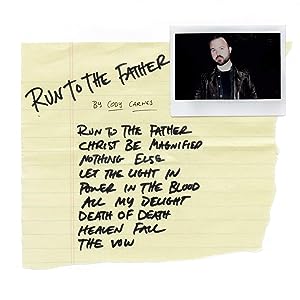 Cody Carnes. Husband to worship leader Kari Jobe. Singer-songwriter and artist himself. Artist of the popular radio hit and chart-topper ‘The Cross Has the Final Word’. Released one full album in late 2017, alongside releasing another song with wife Kari last year titled ‘Cover the Earth’ (a song co-written with fellow believer Daniella Mason- who’s ministering in the mainstream music circle!). And in my own opinion (but what do I know- I’m just a reviewer!), Cody Carnes has been instrumental in the reinvention of the worship genre of music, if ever worship was a genre to begin with. Just like artists gone before him, from Crowder, UNITED, Meredith Andrews, All Sons and Daughters and Phil Wickham, to Jesus Culture, Third Day, Chris Tomlin, Tim Hughes and Paul Baloche; Cody’s infectious joy and passion, alongside the actual songs that ooze out biblical truth and heartfelt anthems that can be sung in a variety of life settings, is what I believe will continue to bring Cody to give to us again and again, songs that stretch us in our own beliefs of what worship music should be like. Upon the slew of singles he’s released at various points throughout 2019- songs like ‘Run to the Father’, ‘Heaven Fall’, ‘Nothing Else’ and most recently ‘Christ Be Magnified’; Cody has unveiled to us in 2020 a collection of 9 songs (10 if you include the radio version of ‘Run to the Father’), aptly and even sutably titled Run the the Father– inclusive of the four aforementioned singles, plus 5 new ones. A very short, but still biblically sound and lyrically poignant follow-up to his 2017 album The Darker the Night/The Brighter the Morning; Cody’s new album is full of passion and wonder, and a must-have if you are a fan of his earlier material, or love vertical worship for the church a la his wife Kari Jobe, Bethel Music, Jesus Culture or even Passion Music (headed right now by Kristian Stanfill, as opposed to Chris Tomlin of the past).

Cody’s four singles released in 2019 have been reviewed by our site before, and all can be reviewed in the clickable links, of ‘Run to the Father’, ‘Heaven Fall’, ‘Christ Be Magnified’ and ‘Nothing Else’. And yet for those who haven’t clicked on the links for whatever reason, let me give a quick run-down on these four songs before we look at the newer material. ‘Nothing Else’, standing at 6:33, is a song of saying sorry to the Lord for placing things of this world above Him, and for Him to take us to a place where all we understand and know is that there’s nothing else that can compare to the joy of knowing and loving our God. Such a bold assertion and statement is backed up by an apology of sorts in the chorus of the song, where Cody imparts that he is ‘…sorry when I’ve just gone through the motions, I’m sorry when I just sang another song, take me back to where we started, I open up my heart to You, I’m sorry when I’ve come with my agenda, I’m sorry when I forgot that You’re enough, take me back to where we started, I open up my heart to You…’, as we realise that yes, there are things in our own lives that may hinder us from God, and so, what do we need to say sorry for if given a chance through this hauntingly beautiful and confronting melody of ‘Nothing Else’? ‘Heaven Fall’, co-written with Seth Mosley and ex-lead singer of Sanctus Real, Matt Hammitt; speaks of longing and wanting heaven to fall and come down to earth and to start a much-needed revival for all mankind, and as Cody himself channels his greatest Phil Wickham impression; while a song like ‘Run to the Father’ is by far the biggest standout on this 10 track album. ‘Run To the Father’, a song that I believe was one of worship music’s most impactful songs of the 2019 year, really reminded me what it means to get back to basics and declare from the heart that all that is needed is to run to the Father of all fathers, to sit at His feet and be enthralled at what we believe our God is capable of. ‘Christ Be Magnified’, the last remainder ‘old’ song on this album, released as a single on January 1st 2020; debuting at Passion 2020 on stage in front of millions at Mercedes-Benz Stadium in Atlanta, Georgia. The song itself is as hymn-like as many of other modern day hymns, and reminds me of a similar structure, at least stanza-wise, to Phil Wickham’s ‘Living Hope’, another great song by another great worship artist. ‘Christ Be Magnified’ is Cody’s attempt at placing the audible moments of prayer into a song that expresses our very own declarations in a universal and collective mentality. A song that I’m sure will be used aplenty amongst people in Sunday morning church services around the world in their Sunday morning song-lists for musical worship; ‘Christ Be Magnified’, alongside ‘Run to the Father’, has given to us great standouts that continue to elevate this album (or should I say long-ish EP) as being one of my favourites of 2020 thus far!

‘Let the Light In’ is a call for us all to be vulnerable and to ask the Lord to open up our lives and to show us things about ourselves that we need to work on, but also show us what it means to lay bare without any precondition or pretense, and just bask in His glory and allow Him to rework things in us that only He can- ultimately for our good and His eternal glory; while ‘Power in the Blood’ is thematically similar to Lincoln Brewster’s ‘There is Power’ from a while back, as Cody asks us all if we’re depressed, longing for peace, in need of healing, searching for meaning, wanting freedom, or even recovering from a broken heart. Whatever the case, we are called to understand that there is power in the blood of the Lamb, and that we ought to rest assured, that even if our situation at hand is the direst, God can and will come through for us, most times in ways we can know and see, but at times in other ways that we often don’t understand, but still trust Him anyway, on the basis that God is God and we are not. ‘All My Delight’ is the most upbeat song that Cody has ever produced; and harkens back to a similar-sounding similar-themed song way back in the day- Chris Tomlin’s ‘All My Fountains’. The song itself for Cody? A congregational worship song that allows us to understand that the joy and hope and infectious love that we as Christians have can and only should be found in the Lord our God, the source of all things good. ‘Death of Death’, a cover of Life.Church Worship’s single (a new worship ministry signed to DREAM Label Group), is expertly done by Cody and delivers a modern-style hymn in a similar vein to how Phil Wickham’s ‘Living Hope’ was undertaken, while album ender ‘The Vow’ , a song co-written with Steffany Gretzinger, is a string-and-keyboard only melody full of life and passion as Cody delivers a vow-of-sorts to Jesus, declarations that he will assert to God that he will do for the rest of his life- ‘…I need nothing but You Jesus, all I’m after is Your heart, destination doesn’t matter when the journey’s where You are…’

Sombre and reflective, heartfelt and true, much of Cody’s songs have a congregational worship stamp on them. And that’s ok. But some of them, though labelled holistically as congregational worship, simply don’t fit in a corporate collective worship setting. And that’s still fine as well. For Cody’s music on the whole facilitates worship, be it as a group or in an individual setting. But what Cody has done right is to deliver a different side of worship music so that we are not confined into what we believe to be what worship should look and sound like. In times gone by, Cody has made it a habit to produce songs for the church, and though in this album’s case, some songs don’t fit the ‘worship’ mould; on a whole Cody and his music has been able to shape and reshape the view of how worship music should look like to not only people within the 4 walls of the church, but to those outside it as well. And for that I am grateful for his music. Well done Cody for such a powerful album, one that I’m sure people will enjoy and employ in Sunday morning church settings in the upcoming weeks and months ahead.

3 songs to listen to: Christ Be Magnified, Death of Death, Run to the Father