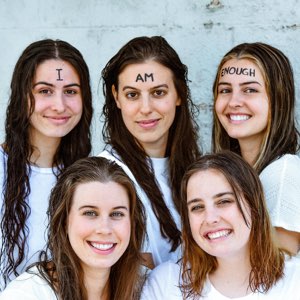 Cimorelli need no introduction, aside from the fact that this all-sister girl group is to be listened to by anyone who loves music…period. These Cimorelli sisters originally from California (but now residing in Nashville, Tennessee), have carved up a name for themselves when it comes to popular groups in and amongst the Youtube scene, and while this group of devoted young Christians are influencing the younger generation (through their many covers and original material they release at various points of the year via Youtube), it has been their transparency and consistency to provide content to us all on a weekly basis that give us an inside look into their lives as artists and influencers that currently make these young women arguably one of my favourite bands at the moment. With the band already unveiling to us a flurry of EPs and albums all since their rise to stardom way back in 2011; Christina, Katherine, Lisa, Amy, Lauren and Dani Cimorelli have reminded us that to be influential and impacting doesn’t have to require a label. In fact, often the artists that think outside the box and take the most impressive and calculated risks, inspiring and encouraging millions of listeners through their heartfelt music, are the independent artists, the ones that aren’t necessarily on-the-radar. Cimorelli is one of these artists, and a band that I thoroughly respect and admire ever since becoming a fan of theirs during 2016/17.

And so here we are in 2020, upon the heels of a great 2018 and 2019 musically. Pop-relationship/summer EP I Love You Or Whatever, their wedding album Here’s To Us (consisting of a myriad of covers and original material to commemorate and celebrate eldest sister Christina’s wedding), as well as their Christmas EP Christmas Lights (not to mention the release of originally written singles ‘Thirst For Life’, ‘New Year, New Me’ and ‘Single on Valentine’s Day’) all released throughout 2018, while 2019 saw the unveiling of a collaboration with fellow youtuber and rising star Kurt Hugo Schnieder in the cover of Ed Sheeran’s ‘I Don’t Care’, alongside another collaboration with folk-rock duo Pomplamoose for their cover of PINK’s ‘Walk Me Home’. Band members Lisa and Lauren Cimorelli decided to release solo side-projects during the 2018-19 period- Lisa unveiling a slew of singles from 2018 onward (inclusive of songs like ‘Unloved’, ‘Goodbye’, ‘Italy’, ‘Florida’, ‘Back to Me’ and ‘I Don’t Deserve It’), and Lauren releasing her first EP in the middle of 2019, an album in which we reviewed for the site here.

Now here we are in July 2020, and yet another song has released from this now 5-piece band (Dani left at the beginning of 2020, and you can see her departure video up above). After such a successful original song in ‘Believe in You’ that was unveiled October 2019 (which was reviewed by our site here), Cimorelli are back with ‘I Am Enough’, released today, July 24th 2020. Since I live in Australia, the song is out right now, and so it may take a few hours for it to reach the States, because of time zone difference. But I guess now is a good a time as any, to say my thoughts on this emotive and hard-hitting single. First up, let me say that as I initially heard this song, I started thinking, ‘gee…no reference to God or Jesus, no indication of why we are enough…sounds like a humanist song to me’. But then I caught myself, and then I thought. Cimorelli are Christians but then they minister to people maybe who are not, their audience isn’t necessarily the Bible believing Christians that want every line within a song vetted by Scripture- those artists that cater towards that are in the industry aplenty- they’re called worship artists. Cimorelli is not that- and thus, upon reflection, ‘I Am Enough’ is exactly what the world needs right now; and is exactly such a song that I firmly believe the Lord can speak through.

‘I Am Enough’ is a great reminder, a declaration that we are indeed enough, that what we do or don’t do, what we say or don’t, how we look or how we dress or even how we talk, our views about this and that, is not going to affect our worth and value whatsoever- because when God says we’re enough, to the point where His reconciliation plan to bring us back to Himself meant for Him to come down as God incarnate through Jesus in human flesh, to die a gruesome death by way of a cross, and then rise again 3 days later to conquer sin and death- if God did all that; then our value and worth is secure and never wavering. If God did all that for me, then I don’t have to worry about what people think. I already know who I am- unconditionally loved, treasured, wanted, adored, cherished beyond my own comprehension. That is who I am, and no one can take this away. And that is what I firmly believe is the message behind ‘I Am Enough’- even if it’s not explicitly said. And maybe it doesn’t have to be, for God to use this song for His glory and our good.

My musical tastes have been broadened because of Cimorelli, and for that I am thankful and grateful. Music is the universal language of the soul, and as these 6 (now 5) sisters continue to deliver harmonies and melodies as emotive and poignant as they have been for years, then the world will be a better place because of it. ‘I Am Enough’ is not just for anyone who loves current radio friendly pop music. It is for people who love music, full stop. Cimorelli are underrated, and hopefully with this single release, and others that have gone before, we can see the journey of how a little youtube cover band has been transformed into a band that is influencing many young teenagers and young adults (especially teen girls) around the world to this day. Well done Cimorelli for this highly motiavational track, looking forward to more original material- maybe another album?, as the year progresses.