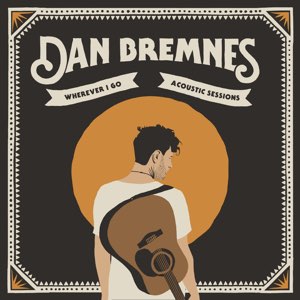 Dan Bremnes. What does this artist have in common with others like Hawk Nelson, Love & the Outcome, The City Harmonic, Matt Maher, Tim Neufeld, Starfield, Relient K, Manafest, Marc Martel, downhere and Amanda Cook? Yes, you guessed it, Dan is Canadian. And yes, good quality artists can come from outside the U S of A. No seriously, there is a whole different talent outside the U.S. and Dan here from Canada has delivered such quality in his debut album that he released in 2015 titled Where the Light Is when he signed to Sparrow Records (the album featuring his chart-topping hit single ‘Beautiful’). Fast forward to 2019 and we see Dan signed to another major CCM label, Word Records, and with another project, a 14 track album titled Wherever I Go– I reviewed the 7 track EP that came out in 2018 here, and my brother wrote about his thoughts on the album as a whole here; and thus, we come to the middle of 2020. Wherever I Go the album has become one of the brightest sparks of 2019 as a whole, and a collective album that has come from left field, in a good way. Featuring songs like ‘Going Together’, ‘Up Again’, ‘How You Love Me’ and ‘Wherever I Go’, the title track, Wherever I Go was an album that reminded myself of God’s presence with me regardless of where I am.

And so we are here in July 2020, and Dan has unveiled to us another project of his own- this time it’s titled Wherever I Go (Acoustic Sessions)– songs primarily from Wherever I Go and one from Where the Light Is for good measure; redone in an acoustical way. While the whole project is nothing new from Dan, the album is a must-have if you want to listen to some of Dan’s most recent songs in a whole new light, as we see that often during times of uncertainty and crisis, acoustic songs that often strip away the instrumentation and highlight the lyrics, are often sought after in a time like this, as if we’re searching for hope and meaning in this crazy time. This album is primarily for those who love acoustic music, or even those who enjoy a lot of Dan’s music previously. With special guests from Love & the Outcome and Stars Go Dim, to Mike Donehey and Meredith Andrews; Dan’s new album release isn’t necessarily that new- you can read reviews of the songs from our own reviews of both Wherever I Go and Where the Light Is, but what I will say is this- the acoustics on this album make me enjoy these songs all the more. The additions of Love & the Outcome, Stars Go Dim, Mike Donehey and Meredith Andrews on ‘Up Again’, ‘Searching for Something’, ‘Weakness’ and ‘Beautiful’ respectively; enhance the songs to a much more collaborative atmosphere as we are challenged and reminded that during such a time as this uncertain moment, we need to collaborate and fellowship with each other all the more- be it physically (but still adhering to the social distancing guidelines) or via social media; but whatever the case, this album is a gentle reminder that to have connection with another, in a moment like this, is such a beautiful thing.

Throughout much of this album, and albums previously; Dan has delivered songs that have a positive message, but also songs that can have more of a universal appeal, reminding us that a song doesn’t necessarily have to have the words ‘Jesus’ or ‘God’ there for Him to use it as He sees fit. In fact, I think it’s great that Dan’s songs of late are more ‘mainstream-y’, providing more of an uplifting alternative to whatever is currently on the radio right now. Yet, Dan still reminds us all that it is first and foremost God and the gospel, Christ and living the Christian life; ever the while expanding on his own musical horizons, one that has allowed him to release much of his songs on Wherever I Go, of which can be impacting to those who love Christian music, mainstream music or both. Wherever I Go (Acoustic Sessions) is a breath of fresh air and a different take on some already great songs from a tremendously underrated artist in the industry right now. And while a lot of Dan’s new songs, on this acoustic album and his 2019 album of the same name, on a holistic view are much more universal in nature and message (except for the last song ‘Beautiful’ here on this acoustic album, that is very much gospel in song); that doesn’t mean that the Lord doesn’t use it any less. Dan continues to be faithful to his God and family, and the 2019 album, and this acoustic one, is a testament to that. Dan continues to impress; and is a must listen if you love acoustic-folk-CCM, Canadian artists, or both. Well done Dan for this emotive and poignant acoustic album. Looking forward to whatever God has in store, in the upcoming weeks and months ahead!

3 songs to listen to: Up Again, Beautiful, The Way