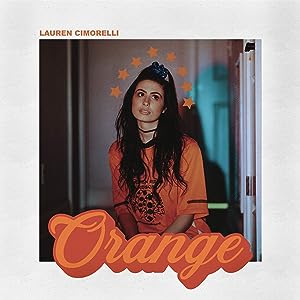 If you’ve been a fan of Cimorelli like myself over the last few years, for any of the band members (who are all in fact sisters) to release some material on their own can cause alarm bells- are the band breaking up? Are some members leaving to pursue a solo career? Is the band evolving in ways unimaginable? Whatever our thoughts that come into our heads, we think them. It was the case when Lisa Cimorelli released her new solo material, of which she stated from the start that she was not leaving the band, but rather, doing something on the side in addition. And now, we see another Cimorelli sister have courage enough to release a collection of songs in a solo capacity. Lauren Cimorelli, the second youngest of the sisters in the group, recently unveiled to the world her debut EP, Orange. Fans of Cimorelli the band will enjoy this EP, all the while being proud of the fact that individual band members within a band collective can still venture out and do their own thing, alongside the main band activity. For Lauren to carve out time to create these four songs, and then send them out into the internet ether, either to be praised or critiqued; takes courage. Since releasing her debut single ‘Running’ late last year, and a few songs scattered around this year as well, July 26th marks the date where we see a passionate young woman deliver songs of emotion, hope, warning and comfort as these four songs are a must if you love indie music with a motivational and heartfelt edge.

As Lauren herself delves into the heart behind ‘Running’ and what she herself wants to convey, we are reminded that songs like these are a window in time, a snapshot of what someone was feeling at a certain moment. For Lauren herself, the song was about when she was a teenager- This song is about feeling like a psycho. It’s not being able to eat. It’s wanting to cry for no reason. It’s knowing that in 5 minutes, a guy I really like is gonna pick me up, but feeling like I would rather die than go hang out with him. It’s getting up to throw up in the chick fil a bathroom, and sitting back down like nothing happened. It’s feeling trapped. It’s feeling out of control. It’s changing my mind constantly. It’s feeling guilty. It’s not being able to process my feelings. It’s about being 17 and terrified Yet on the surface, this song sounds like another melody that feels like another depressing ‘woe-is-me’ ‘I’m-gonna-run-away-from-our-relationship’ track; but when we take a step back, we understand and realise that these songs need to come out into the open, be a song so that people who also feel this way can relate and understand that they are not alone. And we need to remember, this is what someone is feeling a few years ago. Feelings don’t equal to fact, and for a song to venture out into the iTunes ether, we see a carving of a melody that has taken it’s time to birth, a song that, while sad and depressing in every sense of the word, can evoke hopefulness and change in people as they see that to run from a relationship can either be good or bad, depending on the relationship in the first place. Even a song like this, as emotive and poignant as it can be, will still be used by God Himself to convey what He wants, to speak into people’s lives and remind us all that though earthly relationships often fail (be it romantic, platonic or otherwise), the relationship God has with His children doesn’t. His love is steadfast, firm, true and unwavering, and if it takes a song like ‘Running’ to realise this fact, then the song has served its purpose- no matter how initially unsettling and dark the song sounds from first listen.

Throughout the rest of the EP (3 other songs), Lauren continues along the theme of love and loss, of pressure and longing, of hope and encouragement as each of the other three songs takes on a topic at hand that is relevant and prevalent today. ‘Flames’ speaks about the real danger that can happen when someone falls for someone else who is already attached (either has a boy/girlfriend, is married), and is a reminder that when faced with such a situation, the dange need not to be entertained but rather run from. In these delicate situations, it takes two to tango, so it is very much on the ownership of the person who is falling for the ‘attached’, as it is also the responsibility of the person who is attached to distance themselves from the situation also. ‘Brown Eyed Boys’ is featured with a sheen of the musicality of the 1980s as Lauren presents a theme of someone falling for their weakness every time, and in this case, it’s brown-eye boys. The song itself is a metaphor, I reckon, for situations in life and ourselves who have our own ‘Achielles Heels’ so to speak, and being reminded that every circumstance that tempts us to fall deep down the rabbit hole, is an opportunity for us to exercise our resolve to remove ourselves from said situations. Musically, this song is unique and harkens back to music of the early 2000s, and is a welcomed surprise in this EP set. ‘Pressure’ is the remaining song on the EP, and features the ever-relatable theme of pressure and what we place upon ourselves and how we want certain outcomes to occur in pressure situations. Reminding us that it is unhealthy for us to continue down a spiral of comparison and longing and wanting more things than necessary, this song is coupled with a nicely undertaken music video featuring Lauren in various states of pressure and relating to things happening to her over a given day. A song that can hopefully encourage as it can give us great fun (musically), ‘Pressure’ is a track that can and should have real world applications. Well done Lauren on both the song and video- can’t wait for more music to hopefully come our way- whenever that may be.

Lauren’s first EP is one that is certain to be enjoyed and loved if you are a fan of Cimorelli,more importantly, a fan of their 2017 album Sad Girls Club and that era of music in particular. Lauren has taken a piece of herself and placed it onto the page, and Orange EP is a result. Though not as polished or even refined as many other songs from artists that are on a label, it is the presence of this raw and authentic quality (because of Lauren and Cimorelli themselves being a band that is independent) that will encourage us all to take a step and hear more vulnerable and impacting songs from more indie artists in the future, rather than the radio pop consuming homes at the moment. Well done Lauren for such a heartfelt EP, here’s hoping for many more in the future. Maybe, just maybe, she can undertake her solo material and her Cimorelli commitments in tandem. Looking forward to whatever the new solo material brings in the upcoming months ahead. So what are we all waiting for? If we’re a fan of vulnerable music, as we all should be, then take a listen to the heartfelt moments of Orange EP, as we let the Lord God speak to us and remind us all of the empty pursuits one would have when they finish all the running and the pressure we put on ourselves. And thus, we run towards the one person who will always be with us- Jesus Himself!