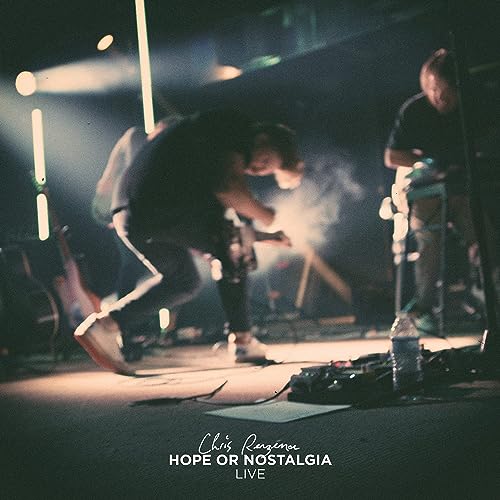 One of the most underrated artists at the moment right now in my opinion, across all genres, is CCM/folk singer/songwriter Chris Renzema. An artist that I’m still not all that across (because I haven’t listened to his debut album Let The Ground Rest from last year yet, even though I planned to!); Chris’s songs are similar in style and theme to other artists like Jason Gray and Andrew Peterson. He’s the guy who definitely won’t be played on the radio- because his songs don’t fit in a box musically and thematically. They’re not pop songs; but Chris is still a powerful and inspiring artist nonetheless. And therefore, he’d be the guy where you’d have to seek him and his music out in order to fully appreciate and experience his music. As in intentionally type in his name in YouTube or Spotify. I mean, that was the vibe I was receiving from hearing Let The Ground Rest here and there all throughout last year- that Chris was a unique and different and special artist. You can read Jon’s review of the album here… but when I heard word of Chris’s sophomore album Get Out of the Way of Your Own Heart releasing in September 2021; I decided to take the plunge and step out of my comfort zone and review the album. I mean the easiest option would be to let Jon review the album as he’s familiar with Chris’s music… but I thought ‘why not stretch myself’. And stretch myself, I did! Being a Christian album, it wasn’t too foreign to me, but Chris’s latest batch of 12 songs is still out of my comfort zone musically. But let me tell you something. Get Out of the Way of Your Own Heart flows quite well. It’s an album that no doubt should be listened to at least once- and an album whereby I’m sure you’ll be impacted even if you aren’t a fan of folk music and slower-paced melodies.

And as such, I rated Chris’s album a glowing 5 stars- one of the most compelling, powerful, honest and thought-provoking albums all year. And as you read my review of the album here, now here we are with another release from Chris. This time, it’s a live EP, of 3 songs from the sophomore album. Since we have all been subject to lockdowns, restrictions and vaccination mandates at one point or another; I guess for one reason or another, live shows have been postponed or cancelled. And as such, it’s difficult to actively support your favourite artist. As such, we can all become frustrated and annoyed with the process and the situation. However for Chris Renzema, touring still eventuated, as he recently embarked on his long-awaited “Hope or Nostalgia” headline tour this fall, however he mainly played in smaller venues and clubs. In 2022, Chris is extending his “Hope or Nostalgia” tour to larger venues; and so for most of us who haven’t been able to attend his tours, this EP, albeit brief, is for us.

Musically, this live EP strays quite close to the studio versions, although with the added atmosphere and ambience of a live crowd. And as such, there’s not much to say about this EP, other than that it shows Chris being a great performer and that his show would be a blast to attend. 80’s inspired rocker “Old Dreams” has Chris channelling both Mike Donehey and Jon Foreman vocally, and lyrically reminds us that sometimes letting go of old dreams and the past, allows us to live freer in the present, allowing us to be more present in the lives of our friends, family and our loved ones. “Stronger Love” (recorded live in Athens, and this time not including Leeland!), is next and as Chris singing about unity in the church despite our differences and agreement, and that we need Jesus’ love to bind us all together as one body. It’s songs like this that further cement my view of Chris being an underrated but undoubtedly talented and impressive songwriter- and the further along I found myself in Get Out of the Way of Your Own Heart, the more entranced and enthralled I became by the quality of the project! Hope Or Nostalgia then quickly ends with the title track of the full album, as “Get Out of the Way of Your Own Heart” is a thought-provoking and confronting rock melody about being stuck in your head and in your feelings for longer than you need to be, and ultimately surrendering to the love of our Father and Friend. As Chris powerfully relays that we need to be letting go of the things we’re afraid to give over to God, so that we could be more free and live life to the fullest; this melody is a breath of fresh air and is a challenge to us in order to live life and live it well.

Chris Renzema may be the next Andrew Peterson. Or the next Mike Donehey. Or the next Jon Foreman. Or the first Chris Renzema, similar to all of these three vocalists in lyrical style and impact! Regardless of how you think of Chris, his albums generally are nothing short of being remarkable. Musically, there’s nothing that grandiose on his albums, and on this EP in particular, but the lyrical content is powerful and extremely moving- with hard, relatable and relevant topics being discussed at hand here without any sugar coating. With all of these three songs being my favourites on Get Out of the Way of Your Own Heart (and others- that album is near-flawless!); there’s nothing much more to say than for you all to listen to the album and be amazed by Chris’s prowess as a singer and a songwriter. Well done Chris for a thoroughly enjoyable and exemplary album. I can’t wait to hear what God has in store for you next!

I am really excited to be hitting the road again this coming spring. Getting back to playing live shows was such a life-giving thing, which I think translates very evidently in the Hope Or Nostalgia Live recordings as well. Singing, dancing and worshipping together means more to me now than ever, and it’s going to be a blast getting back to it.