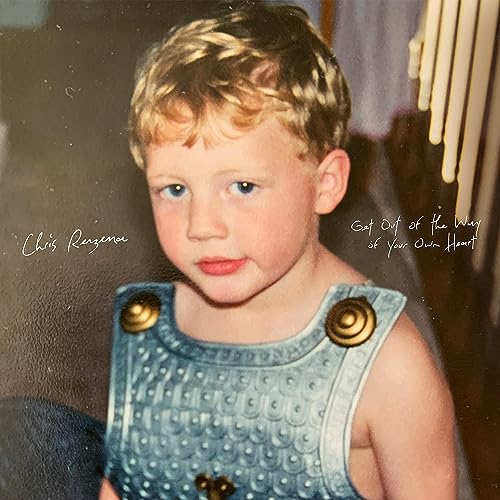 One of the most underrated artists at the moment right now, is CCM/folk singer/songwriter Chris Renzema. An artist that I’m not all that across (I haven’t listened to his debut album Let The Ground Rest from last year yet!); Chris’s songs are similar in style and theme to other artists like Jason Gray and Andrew Peterson. He’s the guy who probably won’t be played on the radio- because his songs don’t fit in a box musically and thematically. They’re not pop songs; but Chris is still a powerful and inspiring artist nonetheless. And therefore, he’d be the guy where you’d have to seek him out in order to fully appreciate and experience his music. As in intentionally type in his name in YouTube or Spotify. I mean, that was the vibe I was receiving from hearing Let The Ground Rest here and there all throughout last year- that Chris was a unique and different and special artist. You can read Jon’s review of the album here… but when I heard word of Chris’s sophomore album Get Out of the Way of Your Own Heart releasing in 2021 (releasing today!); I decided to take the plunge and step out of my comfort zone. I mean the easiest option would be to let Jon review the album as he’s familiar with Chris’s music… but I thought ‘why not stretch myself’. And stretch myself, I did! Being a Christian album, it wasn’t too foreign to me, but Chris’s latest batch of 12 songs is still out of my comfort zone musically. But let me tell you something. Get Out of the Way of Your Own Heart flows quite well. It’s an album that no doubt should be listened to at least once- and an album whereby I’m sure you’ll be impacted even if you aren’t a fan of folk music and slower-paced melodies.

I feel like a lot of what I was struggling with over the last year-and-a-half was mostly about me standing in my own way. In the song, ‘Get Out of the Way of Your Own Heart,’ the lyric of the bridge encourages, Take yourself down off the line, give yourself a little grace. A lot of this new album is me trying to express and process feeling a little subpar and trying to allow myself to feel OK and to be a little nicer to myself.

Making this record was a truly cathartic process for me, and budget therapy for the insanity of being a human. I spent the better part of 2020 drinking a lot of Lacroix with my friend Hank Bentley and verbally processing all that was happening and by the end of it we had recorded an entire album.

We wrote ‘Stronger Love’ when things were viscerally divided in our nation, with culture preaching that the solution was somewhere within ourselves. So the song became about having an anchor and a hope in something bigger than us. Honestly, a lot of the sounds and songs on this record are coming from a place of like, ‘man I wish I could be playing fun music again live’. This new album is very much geared towards being played in concerts, sang along to, rocked out to.

Opening with 2 minute reflective and introspective “Hope Or Nostalgia”, Chris poses to us a scenario. A scenario where he’s still confused and perplexed by the ups and downs of life. and it’s also a scenario whereby he hears a voice letting him know that everything will be alright and that ‘I got ya’. Now in a CCM pop song, the voice would be ‘God’ and the tension within us would dissipate and turn into full on surrender to God- and all within 3 and a half minutes. But with Chris’s song, the question of ‘is the voice inside us reassuring us hope or nostalgia?’ reminds us all that sometimes we think something is of God and it’s not. And sometimes we think something isn’t of God and it is. I mean, God does remind us all that everything will be ok, but is out exact thought at this very moment when we’re thinking that everything is ok… is that from God or from ourselves? Or is it both? Songs like this don’t have a proper ending… but if Chris’s lyrically layered opener generates buzz and healthy discussion, then don’t you reckon it’s a good thing? If song #1 is that rich in terms of lyrical content, for a 2-minute song, then how about the rest of the album?

The answer is that the rest of Get Out of the Way of Your Own Heart is just as compelling, impacting and moving as the album opener. The title track is a thought-provoking and confronting rock melody about being stuck in your head and in your feelings for longer than you need to be, and ultimately surrendering to the love of our Father and Friend. As Chris powerfully relays that we need to be letting go of the things we’re afraid to give over to God, so that we could be more free and live life to the fullest; this melody is a breath of fresh air and is a challenge to us in order to live life and live it well. 80’s inspired rocker “Old Dreams” reminds us that sometimes letting go of old dreams and the past allows us to live freer in the present, allowing us to be more present in the lives of our friends, family and our loved ones; while the confessional, honest and emotional ballad “Just As Good” is a personal album highlight. Sung with Ellie Holcomb, Chris eloquently sings out his need for God and asks God to reveal more and more of Himself to him, asking God ‘…would you remind me that You’re still just as good as when I met You, You’re still just as kind, don’t let me forget that You’re still the same God who led me through the fire, You’re still the same God that separates the waters, come do what only You can do, God I need you…’; and boy… if this isn’t a song where we can declare with confidence as a track of personal worship, then I don’t know what is!

Musically there isn’t anything interesting about Chris’s songs. They aren’t flashy nor poppy. But what lacks musically in these songs are more than made up for with the powerful and resonating lyrics. This sentiment is evident once again in “No Room For An Anxious Heart”, as Chris emphatically relays that God is with us and that He loves us immensely even during the times when we feel like we’re unworthy, when we’re anxious or when our self-belief is almost non-existent. It’s a song with a simple message, but in cases like these, simplicity brings for a concept and doesn’t hinder it; while the testimony type rocker “Without You” brings Chris out of his musical ‘box’, singing out that he doesn’t know where he would be without God, that ‘…I’d probably still be throwing rocks at cars, bumming cigarettes off strangers and driving through the dark, I’d probably still be lost up in my head tryna figure out if I should get up or stay in bed, oh I don’t know, I don’t know I don’t know where I’d be without You…’. It’s a song that again is quite simple lyrically, but a powerful melody nonetheless. Chris then passionately sings out with Matt Maher that we as believers are all part of one body of believers in “No Body”- reminding us all that we each can do our bit to grow the kingdom of God, and that it is our duty and our responsibility to help our brothers and sisters in need (Matthew 25:31-46); and he also employs Leeland on “Stronger Love”, where he sings about unity in the church despite our differences and agreement, and that we need Jesus’ love to bind us all together as one body. It’s these duets (as well as the previous duet with Ellie Holcomb!) that further cement my view of Chris being an underrated but undoubtedly talented and impressive songwriter- and the further along we are in Get Out of the Way of Your Own Heart, the more entranced and enthralled I become by the quality of the project!

“Old Friend”- a joyous 80’s themed rocker which compares Jesus Christ to an old friend, a close brotherly and fatherly relationship that becomes better in time like wine, is a song that melodically and stylistically reminds me of Chris Stapleton or Needtobreathe; while the reflective and contemplative piano led ballad “Heart, Soul, Blood, Bone” is similar to Mandisa’s “Bleed The Same”, and speaks about we all as humans have similar wants, needs, desires, hopes and dreams- that we’re all longing to be loved and for human connection. “The Right Things”, a potent and powerful piano led ballad, is the penultimate track on the album, and is a wake-up call of sorts (similar in theme to Lady A’s “Worship What I Hate”), with Chris proclaiming that he wants to put the right priorities of God and relationships ahead of material possessions, that ‘…I wanna hold on to the right things and let go of the rest, cause time’s worth more than money and I’m done buying what won’t last cause the years are just a vapor and this life is just a breath…You’re the one thing that will last forever, so I’m done holding onto what won’t matter…’. It’s a song that should be a catalyst for change and for that I commend Chris for this song especially. “Blessed Are Those Who Follow You” ends a near-perfect sophomore album, as Chris vividly and eloquently paraphrases The Sermon On The Mount– the perfect way to end an album released while COVID-19 is still at its height. With Chris declaring that we will be blessed in ways beyond comprehension when we follow Jesus, this song provides us with some sort of comfort and reassurance- even if we can’t see a favourable outcome in the midst of trials and adversities at the moment.

Chris Renzema may be the next Andrew Peterson. Or the first Chris Renzema, similar to Andrew in lyrical style and impact- given that I’m sure Andrew has a number of years in him yet! Regardless of how you think of Chris, this album is nothing short of being remarkable. Musically, there’s nothing that grandiose, but the lyrical content is powerful and extremely moving- with hard, relatable and relevant topics being discussed at hand here without any sugar coating. With songs like “Just As Good”, “Without You”, “Stronger Love” and “The Right Things” being my favourites… there’s nothing much more to say than for you all to listen to the album and be amazed by Chris’s prowess as a singer and a songwriter. Well done Chris for a thoroughly enjoyable and exemplary album. I can’t wait to hear what God has in store for you next!

3 songs to listen to: Just As Good, Without You, The Right Things