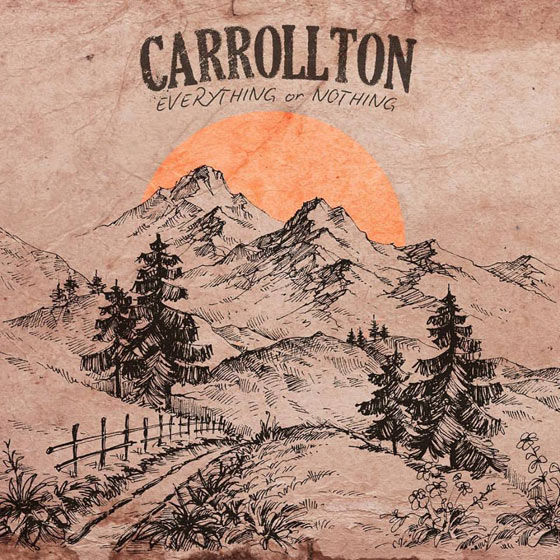 Carrollton– Everything Or Nothing (Amazon mp3/iTunes)

“…this album feels like it’s taken a long time to come to fruition, but that’s where some of the beauty is. We lived and travelled with these songs, rewriting them and reshaping them…These 10 songs are us breathing out what we feel like God’s been doing around and within us. They share a piece of the lives we’ve been living these past two years. Part of our excitement and the fun of making this album was pushing ourselves to explore different sounds and themes, while still reaching back to what makes us, us. You’ll hear some bigger sounds than we’ve ever done before. But we’ve always fought to make our music as honest as possible, and this album feels like our best attempt at that…” Signed To Centricity Music in 2014, relatively new-ish band Carrollton remind me musically of Needtobreathe, Rhett Walker Band, Zach Williams and Third Day, as many songs are driven by the energetic electric guitar. With the band already releasing 2 EPs thus far (Breathe In Deep and Sunlight And Shadows), and with each of these studio tracks employing a slight southern/country slant, it’s hard not to like the quartet’s honest lyrical gems, and be swept up in these encouraging and hopeful treasures, and story inspired songs, bound to be enjoyable in the years to come. Releasing their debut full length album Everything Or Nothing recently, on the same day as Jeremy Camp released his new album The Answer; it’s clear that Justin, Michael, Jeremy and Jordan don’t care about album charts and sales in that sense, and would rather see God’s kingdom come here on earth as it is in heaven. With Justin’s distinct voice reminding me of JJ Weeks, Chris Sligh, Jeremy Riddle and Todd Agnew, and explosive openers and highlights “Glimpses”, “Shelter” and “Stand My Ground” kicking off proceedings, Carrollton’s debut full length album is something for everyone to listen to, and guaranteed you’ll be impressed, and be able to gain something from it. God is definitely speaking here, and that alone is reason enough to check out Everything Or Nothing!

Opening up the vibrant and eclectic batch of ten songs is the acoustic guitar led mid-tempo country inspired tune “Glimpses”, where Justin earnestly asks God to show Him more of Himself, recounting that even now, ‘…You are everywhere I look and I believe in the beauty and broken, a perfect mystery, there is nowhere I can go where You’ll never show Yourself to me, I’m starting to see You in, see You in the glimpses…’, as we appreciate the notion that we can and we do see God in all of creation, in the effects of his handiwork. Lead single “Shelter” is a happy go-lucky, cheerful, celebratory guitar driven pop melody reinforcing the concept of Jesus being our shelter, or fortress, our everything especially in times of trouble, where Justin ardently relays that ‘…You’re my hope, my anchor in the storm, Your love unbreakable, my helper, You are my shelter…’– a song destined to be present on WOW Hits 2019; while potential single and guitar led CCM melody “Stand My Ground” has a Sidewalk Prophets or Big Daddy Weave vibe. On one of my personal highlights, we are presented with a no-nonsense declaration of boldness and conviction, as the band remind us that in instances of life and death, and our faith, we can stand our ground and not compromise on what we believe in, and also not compromise in loving those around us, and showing the love of Jesus to even those who persecute us. Well done guys for including a track here that is sure to pose quite a number of questions and promote plenty of discussion.

The title track is next, and the lullaby-ish guitar led melody stands tall at almost 5 minutes, while thematically and lyrically contains some of the most confronting material the band have ever covered, asking us the question of whether we are giving Jesus everything or nothing. As the band point out, the prayer we should pray now and in the future, is one that is in the chorus, that ‘…I will give you my all, there’s no hiding in the middle ground, either fly or we fall, You have my attention, oh, I hear you now, I surrender, I surrender, ’cause it’s everything or nothing at all…’; while “Giving It All To You” carries on in the same theme, as the southern gospel and jazz infused and toe tapping melody presents a simple and desperate prayer of total surrender to our Maker, Father and Saviour.

The folk/banjo prominent worship melody “The In-Between” is one of the album’s low points- though the track is enjoyable, and quite solid, as Justin fervently sings that he’s going to praise God and worship Him, not just in the happy times and the sad times, but also in the times where life is just plodding along, in the mundane times, as ‘…You are the God of all my days, I will trust in all Your ways, take my hands and guide my feet, I know You’re leading me, I’m gonna dance for You in the in-between…’; I just couldn’t connect with the track for some reason.

On the other hand, the soft, reflective and contemplative acoustic guitar prominent “Rebuilder”, one of the most emotional and honest songs on the album, is one of the high points, as the band enter into Andrew Peterson and Jason Gray territory songwriting ability-wise, where Justin honestly points out that God can restore us and rebuild in us what was once broken, shattered and bruised, no matter how far gone we think we are. While the worshipful, guitar led ballad “Leaning In” presents to us a heartfelt message to all, highlighting that we all need to lean into the arms of our Father and Saviour, especially when we realise that every event occurring in our lives is probably leading up to the moment when we totally surrender to God, and fully understand what a good, good Father He is, and grasp one hundred percent that He has everything in control, even though it may not seem like it right now.

The penultimate melody “Promises” is a part pop, part rock part country melody, with the head bopper pointing out to us that ‘…I’m holding onto to what You say, You will not leave me, You won’t forget, You come through like You said You would, I’m holding on for You are good…’, yet it is probably the most subdued track on the album, the album closer “I Will Trust”, that sums up Carrollton’s album and the message in a nutshell. The song is basically about declaring that we can trust in Jesus, because of everything He’s done for us, is doing, and will do, and on that concept and ever true notion alone, Carrollton’s Everything Or Nothing deserves to be listened to multiple times, and maybe studied as a Bible study- there’s so much lyrical goodness on every track. Well done guys for a compelling and enthralling album, and one that will stick with me for e very long time.

Carrollton’s Centricity Records’ full-length debut is something to savour, and is a great alternative if you’re looking for something with a bit more edge in your worship. With a bright future ahead of them, this album is a must for fans of southern gospel, country, rock, and worship, or all four! Perhaps you’ll find a new favourite song or a new favourite genre! There’s nothing much more to say for me to try to convince you to check out the album…so, let’s take the plunge! Are you with me?

3 songs to listen to: Stand My Ground, Everything Or Nothing, Leaning In