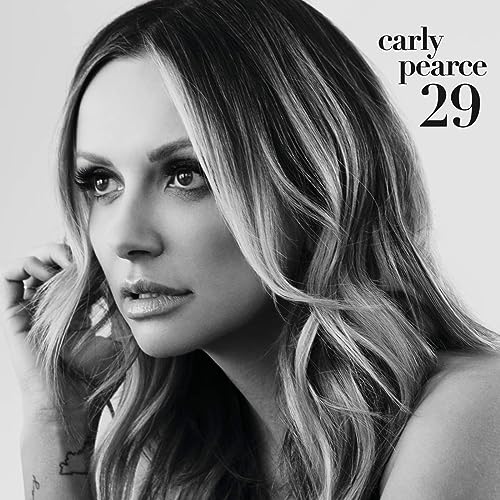 The past year of 2020 has been difficult for many of us, for obvious reasons inclusive of COVID-19. However for me, while lockdown was indeed a challenge and something that I needed to adjust to, what I did find was my musical tastes expanding beyond the confines of CCM and worship. Not that Christian music is bad, but if you limit God to only speaking through the obvious overt melodies about and to Jesus… then I guess you’ll miss out on all of the ways God chooses to speak to us via different avenues. Over the past few years, I found myself drawn to different genres of music apart from CCM, and in particular the country music genre… but it’s only been during this past year that I’ve been immersed the most in the genre of country music- I have blogged about 9 country artists thus far (and counting!); and Carly Pearce’s latest EP 29 reinforces my idea of country music being one of the most honest and vulnerable genres ever… and quite possibly one of the most underrated genres as well!

Last year, I reviewed Carly’s self titled sophomore album, and at the time, I didn’t know a thing about Carly, her upbringing, how she got into music, her backstory, her musical influences and everything else that Wikipedia tells us. And as of right now I’m still not across everything Carly related. Yet with me being introduced to Carly’s music in the strangest way (via a Youtube recommendation!); I was reintroduced to Carly again this year through Matthew West’s song “Truth Be Told”. And then I restarted reacquainting myself with Carly’s music. 29 was the EP that I decided to listen to… and boy is it a tearjerker and an emotional album that probably none of us are prepared for! so it stands to reason that I have decided to voice my thoughts here right now because… well, why not? I know that we’ve reviewed predominately Christian albums in the past, but just take a read of our reviews now! We’ve branched out of late somewhat (cause I’m now of the belief that God can and will use anything to glorify His name and for our good!); and now let’s dive in to hear what Carly has to say about life, love, loss and everything else in between, as she talks about her 29th year of being alive.

They say you live a lot in your 20’s, that you ‘sow your wild oats’ and ‘live it up’ all before you settle down with a family. Yet Carly has gone through pain and heartache aplenty before her 30th birthday- she was married and divorced in the same year, and that alone has taken a toll on herself and the bubbly nature of her previous songs. In fact, most, if not all, of 29 is incredibly sombre and reflective, and though that may turn off some listeners, I reckon that this makes the album all the more stronger- as we hear the real-life stories and lessons learned from someone who has felt and experienced heartache and has come through the other side a much more knowledgeable person and someone who’s character has grown and strengthened in leaps and bounds. The title track is an honest slow ballad that earnestly relays to us that ‘…twenty-nine, is the year that I got married and divorced, I held on for dear life, but I still fell off the horse, from a Miss to a Mrs. then the other way around, the year I was gonna live it up; now I’m never gonna live it down…’, highlighting to us that unexpected hardships can arise, and it’s how we deal with them that tests our resilience and our adaptability (in the case of Carly’s resilience, it was tested when she divorced from her husband!); while bouncy and upbeat tune “Next Girl” is a direct warning to other women who fall under the charm of men like Carly’s ex, as she recounts that ‘…he knows how to say all the right things, knows how to get you outta that dress, knows how to make you think you’re the best thing, but I know what happens next, girl…’. Heartache and warnings come in the more callous and direct “Should’ve Known Better”, as Carly calls out her ex and asks him why she made her feel special and why he strung her along- a song that must have been hard to record; while “Liability” is a groovy jazzy tune with the subject matter being as serious as anything Carly has ever record- accusing her ex of not being honest and cheating at the time of them being together. It’s a situation where we still don’t know the full story of what happened between Carly and her ex, however this track nonetheless is a warning to escape relationships with trust issues and hopefully a catalyst for opening up to people we can truly be ourselves with and not be judged.

“Messy”, probably one of the most ‘country’ songs on this EP, dives deep into the concept of the messiness of moving on from relationship (into another, or just into singledom); while the emotional and personal “Show Me Around” is directed to the late produced busbee, and speaks about Carly meeting him in heaven someday, and is thematically similar to Lauren Alaina’s “The Other Side”. “Day One” wraps up 29 with a heartfelt ballad, and Carly reminding herself that healing from a relationship takes time, and that she will heal if she can get past ‘day one’. Just as informative and educational and dare I say it- powerful, as Matthew West’s song of the same name; “Day One” reminds us of taking our own time in healing from whatever- and that there is no shame in asking for help and asking for friends and family to be there for us. and as god comforts our souls and helps us heal, let us remember that His plan is perfect, and that there is always something good that comes out of every situation, even when we don’t see it at first.

I’ve always thought I had to know about the artist inside and out before I enjoy an album of theirs. But Carly Pearce and her country/pop/bluegrass/acoustic sensibilities have proved me wrong. One of the most unique projects I’ve heard this year thus far (it’s Martina McBride meets Lady A meets Gabby Barrett meets The Chicks in my own honest opinion!); Carly Pearce reminds us that sometimes in the quiet, sometimes in the waiting and sometimes in the silence of lockdown, a gem can be found. It’s also an emotional album that speaks about the fragility of relationships yet also about the healing Jesus brings and the healing time brings from a situation. Some of us may not be in relationships at the moment, but 29 is needed so that we can be content in our own skin while God prepares our hearts for the person He has in store for us. Thus is there anything left for me to say? Other than I will listen to Carly’s debut album… because I’m a fan of her music now? No… I don’t think I need to say anything more. So well done Carly, for a thoroughly enjoyable album- an album that certainly makes us think!

[these songs] were all hard to write. Hard to record because I had such an expectation in my brain about how I wanted them to sound and some of them were just hard to come out of my mouth without being emotional. I think what’s great about the music coming out now is I’m a few steps removed from it, so I’m able to speak about it in a way that feels OK and feels like I got to the other side of the mountain. I’m almost in a phase of being proud and excited.

I am so grateful for quarantine. I truly … I could still be married at this point. I think it’s very easy, especially in what we do, to zip your dress up, put your shoes on and go pretend. Not to say that we are pretending, but there is a difference between Carly Pearce and Carly the person. I can differentiate them pretty well when I need to, especially if I don’t really want to really deal with what’s happening at my heart level. I can tap into whatever everybody else thinks is going on. I’m really grateful for quarantine because I think it allowed me to have the time and the space to deal with the inevitable. But as artists, I think that’s kind of the hardest part. That’s why I decided to come out with what happened to my face. It feels so much like a weight lifted off my shoulder this year of just being like, “Here, I’m not Facebook and Instagram perfect. Here you go.”