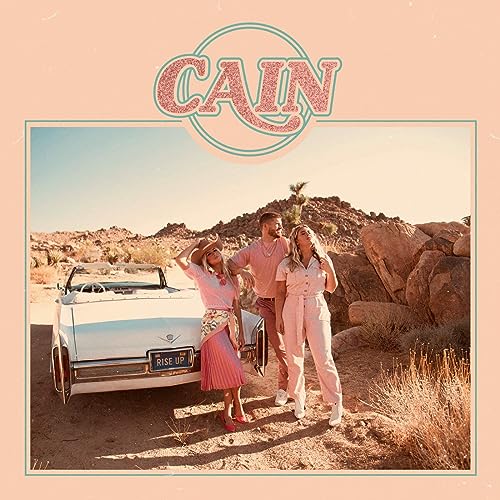 In the history of CCM music (or actually in the history of music generally!); new bands have formed, and older bands have disbanded. Or maybe the same new bands who recently formed have disbanded within a year or two, while veterans plough on and on and on… but actually in the history of music that’s the case also. It’s just that some bands are fortunate to last a long time- 10 years or 20 years or longer, while others fold within the first couple of albums. For one reason or another, whether it is through the support of family and friends, or maybe just that the general public supports one particular band over another; it’s just the way it is as to why some bands succeed while others fail. And as we have more and more bands introduce themselves onto the music stage year after year after year; how can we ever keep up with the inflow of many groups with potential greatness? Is there a band saturation? Because if there is, then what hope do up and coming band CAIN have in breaking into the Christian market? Last year, CCM/pop sibling trio CAIN burst onto the scene- comprising of Taylor Cain Matz, Madison Cain Johnson and Logan Cain- and dropped their self-titled EP CAIN. Standing at 6 songs long, and with the release having dropped via Provident Label Group; one might wonder is CAIN are a band that are here to stay for a long time, or whether they’ll be a one hit wonder. So many bands have fallen down and given up at the release of their 2nd album, their sophomore album (which is why it’s called the sophomore slump- so many bands fall down at that particular hurdle!); so is there a chance that CAIN is like that? Well, we reviewed their EP last year, and thus judging from the calibre of their debut EP, and if the quality is sustained for years to come… well CAIN won’t be disbanding for any time soon! CAIN has since unveiled their debut full length album Rise Up today- and with the album being one of my favourite albums of the year thus far, in terms of enthusiasm and accessibility and lyrical poignancy; CAIN is definitely for fans of artists like I Am They and Rend Collective, or any worship band who’s fed up with the same old releases from Hillsong and Planetshakers!

Opening the track list is the fun-filled, energetic, inspiring and no-nonsense “Come Forth”. A track that holds nothing back lyrically, we are met with a prophetic declaration to each one of us and especially to those who aren’t receptive to Jesus yet, as the trio cry out to ‘dead men’ to come forth and open their eyes to watch what Jesus is doing. It’s a confronting melody, but necessary in this climate, as we remember that the King of Kings is worthy of all of our praise, and that even if we feel dead inside, we can come to Him and He can and will make us feel alive again. A natural progression out of the album opener though is the CCM-esque radio friendly “Rise Up (Lazarus)”, which is in fact the band’s debut single! As Logan leads this poppy melody, with a voice eerily similar to Mike Donehey from Tenth Avenue North, we are blessed to hear the group vividly speak about us each coming alive in Jesus through a metaphor of Lazarus coming out of the grave. As we are presented with the inevitable truth that we can ‘…rise up, take a breath, you’re alive now, can’t you hear the voice of Jesus calling us out from the grave like Lazarus, you’re brand new, the power of death couldn’t hold you…He’s calling us to walk out of the dark, He’s giving us new resurrected hearts…’, I can’t help but fervently sing about with the band as well- this track is perfect as the lead single.

The rest of the album reminds us that a ‘standard’ CCM band can indeed impact, resonate and hit our emotions even when on the surface is seems like another run-of-the-mill CCM group. CAIN reminds us that simplicity and going directly to the point works, as we are presented with lyrical gems and songs that aren’t that flashy, but nonetheless still tug at our heart strings. “I’m So Blessed” is a gospel infused worship anthem that basically recounts that our providence over us from God is because of who He is and not due to anything that we have done or will ever do. We are children of God and hence He always showers us with His love and His goodness, and as we sing out that ‘…I’m so blessed, I’m so blessed, got this heartbeat in my chest, though it doesn’t matter about the rest, If I got you Lord, I’m so blessed…’, we are reminded of the unending love of Jesus Christ. “The Commission”, a slower ballad led by acoustic guitar, sung from God’s perspective about what He could have told the disciples before his ascension into heaven- a paraphrasing of the Great Commission (‘…go tell the world about Me, I was dead, but now I live, I’ve gotta go now for a little while, but goodbye is not the end…’); while the happy-go-lucky uplifter “Yes He Can” is basically an encourager detailing that just because times are tough now, God’s promises do not change, and yes, He can help us in our trials because of what He has done in the past- we may not understand what God does now, but in the end everything will work out to God’s glory and our good.

“People Need People”, a radio friendly piano led ballad, celebrates the importance of camaraderie and friendship (similar to 1 Corinthians 12: 15-26), and highlights the ever-true notion that no man is an island, and that a Christian without fellowship is just as easily to fall out of Christianity with no accountability and people walking alongside us helping us and guiding us along the way. As we sing out that ‘…God knows people need people need people need people, to the Father there’s nothing better than when the kids all come together, people need people need people need people, when there’s nothing but love between us, we can finally start to see what God knows…’, this track is a must listen- even if you aren’t believer I’m positive that you will see that people do indeed need people in order to survive and thrive! “Revival” is next, and is a testimony type melody, a mid tempo ballad led by stirring electric guitar and a radio friendly atmosphere, with the theme similar to Matthew West’s “Brand New”. As the girls take over vocals and emphatically highlight to us the need for us to go back to our childlike faith from before, and the need for God to stir a revival in our hearts; we are presented with probably one of the most important tracks on Rise Up.

Dance/pop song “Over My Head” is next, as Logan relays to us that being in a relationship with Jesus is like being ‘over my head’, yet this sheer unpreparedness of being in union with the God of the universe isn’t a bad thing at all, after all it’s pretty exciting and enthralling, as we fall in love with our Maker day after day after day; while the penultimate track “Keep Following” is a modern retelling of “Tis So Sweet”, as the band fervently and passionately relay to us that if we keep on following Jesus even if we feel down and confused, Jesus will come through in the end. It’s a somewhat meaningless platitude for those going through the thick of distress and pain; however, it’s a sentiment that is true even if it is cliché. Rise Up then ends with the piano ballad and personal highlight “Hey Jesus”. It’s a melody that is head and shoulders above anything these guys have recorded, as the Holy Spirit breathed and God anointed melody is an admission of need, and sung from the perspective of a not-yet Christian. As we are presented with a desperate cry to someone to save us from ourselves, this song is like a ‘sinner’s prayer’ is you will and a first step on a beautiful journey with Jesus- with our Father, Saviour and Friend.

It’s a shame that “My Father In Me”, my favourite song on the EP from last year, isn’t present on this album. Yet sky is still the limit for the three siblings in CAIN- a band that is CCM, yet also a bvreath of fresh air musically. While the band can’t tour to the fullest extent at the moment due to the global situation of COVID-19; what we all can do in our homes while we are cooped up, is to listen to this album pronto! Part country, part bluegrass, part worship, part pop and fully inspirational, it is my hope and prayer than CAIN are around for a long time. One listen to Rise Up and you’d agree with me! So what are you waiting for guys? Take a chance on Madison, Logan and Taylor. I promise you- you won’t be disappointed! Fans of Rend Collective, I Am They and Tenth Avenue North will love CAIN!