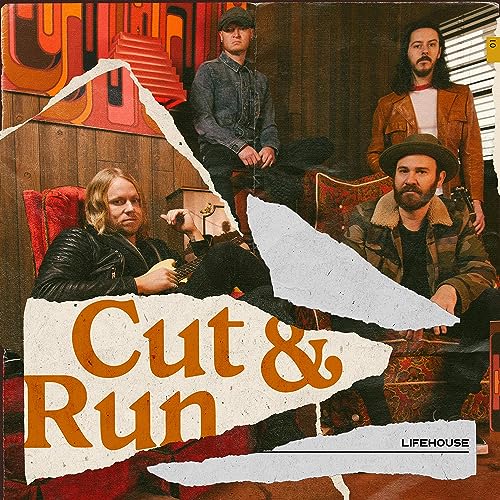 Lifehouse has been a band that I’ve enjoyed thoroughly since I wrote a blog about them a couple of years ago. With their songs like ‘Halfway Gone’, ‘Broken’, ‘Hanging By A Moment’, ‘You & Me’, ‘All In’, ‘Blind’, ‘First Time’ and ‘Whateve It Takes’, these men from Los Angeles have made quite a name for themselves ever since their debut album way back in 2000. Radio hits, songs, albums and countless of accolades later, we see Lifehouse break their extended hiatus (the band released their last full-length album in 2015, they did however release a collaboration with Switchfoot for the song ‘Shine Like Gold’) with a 2021 release- ‘Cut & Run’.

Maybe it’s because I was expecting a lot from this song (it has technically been 6 years since a new song from the band), maybe it was because I was just expecting a lot, but from where I stand, I’m not really feeling ‘Cut & Run’ that much. Gone are the radio-friendly rock anthems of the past, and right in front of us, is something else entirely- a fast-paced electronically infused rock song about…what exactly? The lyrics are just so vague, that maybe this was actually the intention from the band all along, to create a song that people can extrapolate their own meaning from it in whichever way they want. But from the surface, the song is about ‘cutting’ and ‘running’, or in a colloquial term, to make a speedy departure from a difficult situation rather than to just deal with it. Maybe there’s more layers to the song than that, and maybe I would need to listen to the song again for me to understand it a bit more, but where it stands is this- that I didn’t really fully feel enamoured and inspired by this song, nor did I even want to listen to it again. it’s that…I dunno, lyrically vague for me to extrapolate any more meaning from it, than what I just described here? Whatever the case, Lifehouse have a proven record with their albums of the past (and ‘Shine Like Gold’ as well). Maybe this song is just a blip on the journey of albums with is their career. Maybe, just maybe, I can grow to like the song in the future. Who knows- but where it is right now, if you love rock that’s edgy and haven’t listenied to any of Lifehouse’s material before, then this is a great song for you…but if you’re a fan of old school Lifehouse, maybe just stick to songs like ‘Hanging By A Moment’ and ‘Broken’ just a little while longer- just until their next song/EP/album releases, whenever that may be.