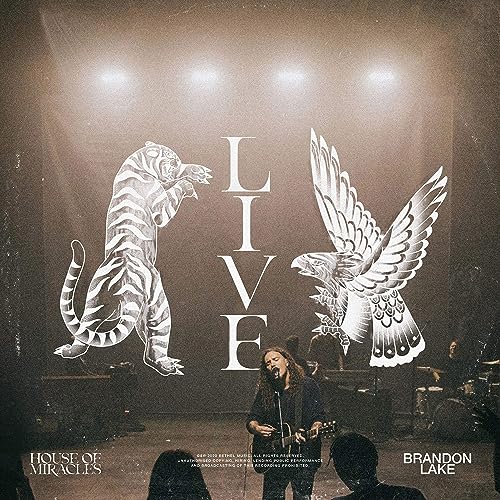 Bethel Music, as a label and as a church, has housed many successful and poignant solo worship artists over the years- both current and former. Brian & Jenn Johnson, Corey Asbury, Amanda Cook, Jonathan & Melissa Helser, Steffany Gretzinger, Kristine DiMarco, Dante Bowe, Emmy Rose, Rebecca St. James, Paul & Hannah McClure, Bethany Wohrle, Kalley Heiligenthal, Josh Baldwin and Jeremy Riddle are the artists that immediately come to my mind, and are probably the most popular and well respected. Yet last year another new-ish artist released a debut album via Bethel Music, that has inspired, impacted and has rejuvenated my soul. Brandon Lake released House Of Miracles in August last year- and though we have reviewed the album here; Brandon has since dropped a live version of House Of Miracles this year… titled House Of Miracles (Live). Yep… that’s super original (not the sarcasm there!).

With the studio version of House Of Miracles being one of the most vulnerable, honest, emotional and inspiring worship albums I’ve heard in 2020, and one that in my opinion you need to listen to pronto; does this mean that the live version is instantly great? In my previous experiences listening to live versions of studio albums- I guess sometimes the project translates extremely well (take Third Day’s Offerings and Offerings II, or Newsboys’ Houston Live We Are Go, or even Josh Groban’s Bridges Live: Madison Square Garden. It isn’t a new concept to completely transform a studio project into a live one, or take elements and some songs off a studio album and base a live project around that. Yet for me there’s something about House Of Miracles (Live) that has me wanting… just a bit. Don’t get me wrong, there’s immense passion here, and the songs are good technically. But with the album clocking in at 93 minutes for 11 tracks, and including 2 ‘spontaneous’ tracks, and a 15 minute song (in “Son Of Heaven”, one of my favourite songs as a studio version, ironically!)… this album isn’t palatable in one sitting, and reminds me of how of late Jesus Culture albums can go on and on and on. This is not knocking Brandon’s enthusiasm and love for Jesus. Because I truly believe that Jesus’ presence is fully on display in this album. Yet there’s just something disconnecting here. No offence to Brandon and his craft, but this album is skippable- particularly when each track duration is overwhelming, and there is no inclusion of “Rattle” and “Graves Into Gardens”, both of which were hits from House Of Miracles!

Thankfully, the album isn’t a total disconnect, with “Show Me Your Glory” (an brand new original song sung with Leeland), and “Lost In Your Love” (with Sarah Reeves) both impressing me. The former is a stripped down, acoustic and reflective worship ballad (that beautifully builds to an epic crescendo that is extremely commendable!) that declares that ‘…one thing I ask, one thing I seek, show me Your glory, You’re all I want, You’re all I need, Jesus, show me Your glory…’; while the latter actually is enhanced from its studio version, and exquisitely depicts our desperation for our Father’s presence and our intense love for Him, and our willingness to step out in faith into His love even if it is unknown and even if it scares us deeply. For live albums that heavily rely on crowd participation and crowd noise to fuel their message and the overall atmosphere…. I guess people who listen to live albums would appreciate it more if they went to the same live concert as well. And the same definitely goes for Brandon Lake’s latest live project. Would I have appreciated it more if I actually attended one of Brandon’s concerts (physically impossible because of distance, and because of COVID-19!)? Maybe, maybe not, but the fact remains that House Of Miracles (Live) is a mixed bag for sure- and House Of Miracles the studio album is more cohesive, impacting and comforting.

Not much is known about Brandon outside of his near-flawless and stellar debut studio album, and the equally confusing and mediocre live album. Yet an in depth history of Brandon and how he acquired his start in music…is actually not really needed for you all to enjoy House Of Miracles (or if you actually enjoy House Of Miracles (Live)!). With the track list of the studio version being just under an hour (definitely more accessible!), let me say that my attention was held all the way on the studio album, but as for the live album I was quite restless throughout- and I stopped in the middle of several tracks, and never continued. So as we wait and are still in quarantine, let us reflect upon the year and upon the future, and let us listen to Brandon Lake’s studio effort House Of Miracles while we do ponder life’s big questions. And even though we may not be as connected to House Of Miracles (Live); at least this batch of songs are at least circulating the globe, and people can hear the wonder of songs like “Lost In Your Love”, “Show Me Your Glory”, “Son Of Heaven” and the title track to name a few. What is next for Brandon, you say? Time will tell- maybe more songwriting for other artists or perhaps working on his second album, while preparing for a tour that will possibly happen next year? Yet until that time, we can press repeat on House Of Miracles several times. If you love albums, then you can listen to this live album too, and make your own judgement. So well done Brandon Lake! I may not be fully captivated by this album, but that’s not to say that others aren’t!

3 songs to listen to: Show Me Your Glory, Lost In Your Love, I Need A Ghost