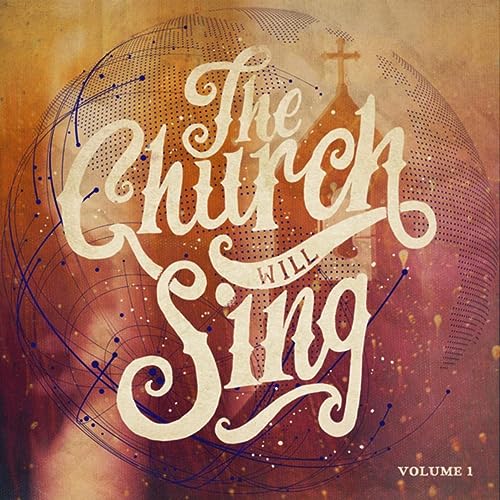 The Church has sung, the Church sings today, and the Church will sing throughout eternity. All of us at Word Worship Music are thrilled to announce the release of this inaugural collection of congregational worship songs, featuring you, the Church from around the globe, united.

It’s our desire for this project to create a conversation about where worship songs originate and how they make their way into the Church’s lifeblood. We hope The Church Will Sing can help elevate the work of many of today’s great worship songwriters in much the same way the hymnal did for writers like John and Charles Wesley and Fanny Crosby.

Aren’t you tired of hearing the same old songs on Sunday mornings, over and over and over again? I mean how many times can you hear “Oceans” by UNITED, and actually be excited for it? I know, I know, it is a great song, but sometimes we all need something new, something fresh, to restart our passion, to wake us up from our slumber. Too many times I’ve seen church attendees in our Sunday service singing the words to the song, but looking bored and uninterested. Too many times have I seen the worship leaders play the same songs, and seemingly going through the motions. And though I know that it’s good to hold onto nostalgia and sentimentality… I reckon clinging onto the past for the sake of it is unhealthy. I mean, there are still so many new worship songs that get me excited to praise and worship God (like Phil Wickham’s recent material, inclusive of his stay at home acoustic worship covers; and the latest albums from Josh Baldwin and Brandon Lake!)… but the question is that will these songs make it to the church where we can sing them out wholeheartedly on a Sunday morning?

And this is where Word Worship Music has come in. in 2018 (yep, 3 years ago!), these guys thought of an initiative that can reinvigorate our worship, and that is to feature our own congregants in the songs. People from all over the globe were asked via a website form to partake in such an unprecedented experiment- and you can all read about the press release for the album that eventuated below!

NASHVILLE, Tenn. — Honoring the Church’s foundational role in proclaiming the Gospel through song, Word Worship Music introduces The Church Will Sing, Volume 1. The inaugural collection in an inspired new series, The Church Will Sing offers a groundbreaking opportunity for congregations around the world to be the featured vocals on 10 new selections penned by the writers of some of today’s most renowned worship favorites.

Churches may select any number of songs from The Church Will Sing track listing, record their congregational vocals, and submit the recordings for inclusion in the final release. Fresh offerings from Tony Brown (“Good, Good Father”); Jennie Lee Riddle (“Revelation Song”); Meredith Andrews (“Open Up The Heavens”); Scott Cash (“Whom Shall I Fear [God of Angel Armies]”); and Matthews Ntlele (“Resurrecting”), among others, will be showcased on the project.

“The Church has sung, the Church sings today, and the Church will sing throughout eternity,” says Jonathan Mason, director, Word Worship Music. “All of us at Word Worship Music are thrilled to announce the release of this inaugural collection of congregational worship songs, featuring you, the Church from around the globe, united.”

“It’s our desire for this project to create a conversation about where worship songs originate and how they make their way into the Church’s lifeblood,” Mason adds. “We hope The Church Will Sing can help elevate the work of many of today’s great worship songwriters in much the same way the hymnal did for writers like John and Charles Wesley and Fanny Crosby.”

Word Worship Music’s TheChurchWillSing.com is a comprehensive resource for congregations interested in participating in the recording, including registration information and an email sign-up for regular updates on the project. Additional resources for The Church Will Sing are available at Loop Community, MultiTracks, PraiseCharts and CCLI SongSelect.

From its inception Word Worship Music has been built upon the rich Church music heritage serving as home to some of the world’s best loved hymns and Gospel songs. From that platform, careers of some of the cornerstones of early contemporary Christian music were launched. With an impressive array of new songwriters and worship leaders, Word Worship Music continues to establish themselves as a leader in songs for the Church. Word Worship Music is a Division of Word Entertainment, a Curb Company, celebrating 65 years of history.

All throughout the years of 2018 and 2019 though, I thought it was a pretty cool concept- but I myself an self conscious of my pretty mediocre singing voice- and hence I decided against singing the demos and sending them back over to be part of the voices of the audience in the final recording. No, during the time when the demos were released to the public in 2018- I became relentless in y pursuit of trying to find out the 10 worship leaders of the songs. These 10 songs were musically and lyrically impressive, but the identity of these singers were elusive and unknown, and demanded my attention until I found out beyond a shadow of a doubt who these singers were. I don’t know why I was so adamant in finding out the identity of the singers, than listening to these songs themselves and being immersed in unbridled worship to our Heavenly Father… but at the time it did matter- maybe even more so than I thought, and more so that worshipping Jesus itself. On a subconscious level maybe.

Yet when the album Vol. 1 released for real a year ago- there was no revealing of the names of the singers (although I still have my suspicious of some of the singers present here!)- and hence I was stumped. I knew I wanted to review the album for sure- these songs were still so good and so Holy Spirit anointed to not be silent about them… but for me to say ‘this song by this unknown singer is about this, and that song by this other unknown singer is like that’… well that potentially different writing style really perturbed me. Yet it is only now in 2021, where I have come to a realisation. That artists don’t need to be known for us to fully enjoy and be immersed in a worship track. I may never fully know who sings what on The Church Will Sing Vol. 1. And that… is strangely ok. These songs, especially “Even Louder”, “Nothing But the Blood”, “All I Want Is Jesus”, “Shepherd Of My Heart” and the title track, have touched my soul and have ministered to my heart- so much so that these songs transcend the writers and the singers. And isn’t that a measure and an accurate barometer of a truly great worship song?

For this ‘review’, I don’t think it’s necessary for me to delve into every single song. Or any song at all. Because for worship songs to be explained means that they’re not that simple, to be sung on Sunday morning in churches. And this is further from the case here. These 10 songs are musically simple, lyrically simple… yet still thought-provoking, comforting, hopeful and inspiring, all at the same time. And as how this album has been released for a year already, and you all probably would’ve heard this album already (and some of you might’ve heard these songs 2-3 years ago when the demos released!); perhaps this whole review is irrelevant. Yet for those of you who are just discovering The Church Will Sing for the first time, let me say that artists don’t make songs. Songs have a life of their own given by God- and no matter who sings it, its message will be still heard around the globe. Sure some artists sing certain songs better than others- but ultimately in the case of worship, the most important thing that God is glorified. Everything else is a secondary issue. So as well sit and worship God and sing along to this historical album (and hopefully there will a second one!)- let’s not be caught up in who sings what. Let’s instead focus our eyes on Jesus and sing out loud a new song to the Lord. 2021 may have started out not so positively (with the riots on Capitol Hill)… but with God by our side, let me say that it’s going to be better! I can guarantee it!

3 songs to listen to: Even Louder, All I Want Is Jesus, Shepherd Of My Heart